MyRacehorse is proud to present the first story in our spotlight series, sharing real stories of MRH horses and the wild rides they take us on. Horse racing can be a fickle business, especially for owners, so perhaps there is no sweeter feeling than being involved in a comeback story. This is exactly what the owners of Lane Way enjoyed when he returned to the races following a nine-month layoff to post a smashing victory while establishing a course record at Santa Anita on Oct. 3!

But it wasn’t all roses with Lane Way. The 4-year-old’s story is not at all uncommon in that racehorses are fragile athletes that benefit from downtime for many reasons, including both physical and mental issues. To say that patience is a virtue in the management of racehorses is an understatement because at some point most need a break from training and racing, and Lane Way identified as one of those horses who would benefit from time off.

When the son of Into Mischief, who is trained by Hall of Famer Richard Mandella, received his respite, he had been in non-stop training for a year, with plenty of miles under his belt, and had raced 10 times with a record of 1-2-5. Lane Way certainly showed talent and was ultra-consistent, and even earned a stakes-placing in a race that came just two starts after breaking his maiden. But Mandella and the MyRacehorse racing management team believed Lane Way was capable of finishing better in his races and went about finding clues as to what was preventing the colt from performing at the level at which we believed he was capable of.  A nuclear scintigraphy, the gold standard of diagnostics, didn’t reveal any significant findings, other than indicating that Lane Way had mild wear and tear in each of his ankles, which can be explained by the length of time he had been in training and racing. But that was enough to signal to Mandella and our team that Lane Way was a prime candidate for a well-deserved rest. During Lane Way’s break, the decision was made to geld the colt, because as Mandella reported at the time, “At this point, we just want to make Lane Way the best racehorse we can make him. There’s been a problem with him just wanting to play, act-up and be ornery, instead of paying attention to his job.” The decision to geld a horse is always a tough one but it can – and this case did – make all the difference in the world in a horse’s performance.

Following his surgery, Lane Way’s time off was carefully crafted and took part in three distinct stages: First some downtime at Peacefield Farm in Temeulca, CA. to gradually introduce him to farm life because it’s typical for racehorse leaving the hustle and bustle of the racetrack environment to feel very feisty when they are introduced to a more peaceful setting. While at Peacefield Farm, he enjoyed leisurely days in the sun in a grass paddock and also partook in the wonderful equine therapy, EquiVibe, multiple times a week. The EquiVibe (a standing vibrating platform) provides many benefits including improved flexibility, calming of the nerves, and keeps muscles active. Following a couple of months of that spa-like experience, it was time for Lane Way to ship to Bonnie Acres Farm in nearby Hemet to begin easing into a training routine by using the underwater treadmill combined with more EquiVibe therapy.

From Bonnie Acres, Lane Way headed to Julie Stacks Farm in Rowland Heights where he began being ridden under tack before he headed to back to Mandella’s barn. And not only was all of this a great experience for Lane Way, many of his owners were able to participate in farm visits to see how their horse was progressing along the way.

When Lane Way began breezing for the Mandella barn, it was clear the time away, combined with his gelding, were immensely beneficial for him. He entered his first start off the layoff following some tremendous works and was sent off an odds-on favorite in a tough field of allowance runners. He made quick work of the competition, sailing home a 2 3/4-length winner while establishing a turf course record for six furlongs in a sizzling 1:06.60! 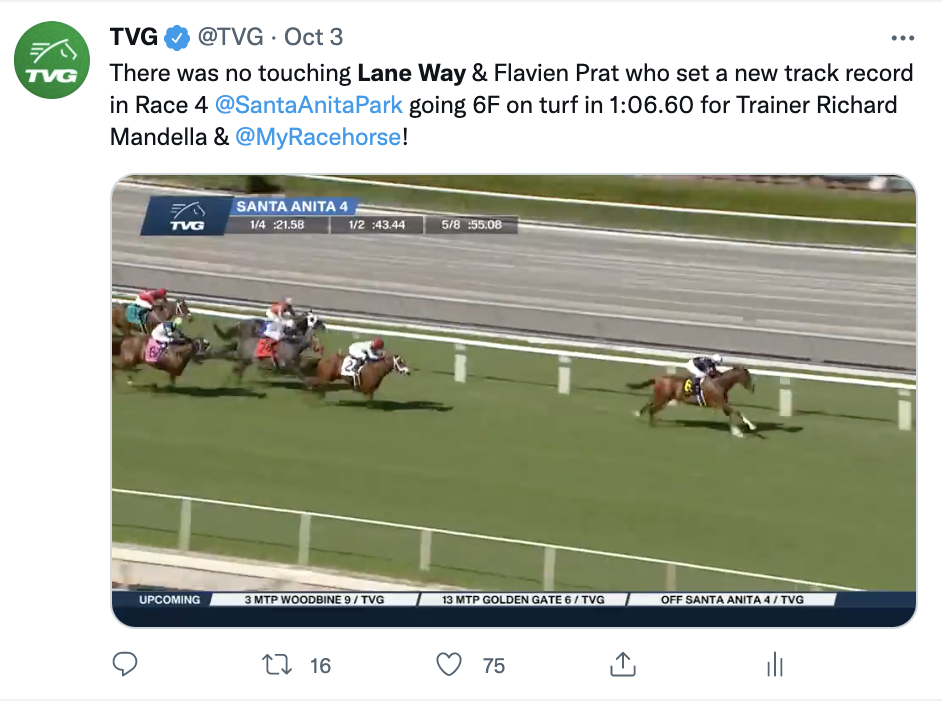 So, yes, while there were frustrating steps along the way for Lane Way’s owners and his management team, the reward for being patient with Lane Way was oh so sweet! We hope you enjoyed the journey of Lane Way. Stay tuned for more MyRacehorse Spotlights!