While Salute to America has returned to the track to train following his latest race, trainer Tom Morley reported our 3-year-old son by American Freedom is beginning to move a bit uncomfortably behind while galloping. While the colt checks out fine physically, Tom has suggested the proactive measure of gelding him, because that often helps with improving hind-end movement. Rather than waiting and possibly seeing this issue develop further, Tom and our racing management team think gelding now will truly benefit Salute to America because, if ignored, this is something that could negatively affect him during his breezes and races, and we want to maximize his performances as a racehorse and continue to build on the confidence we saw from him when he broke his maiden two starts back.

Additionally, Tom explained that Salute to America has reached a level of maturity where gelding him will not affect his testosterone levels negatively. It is unlikely that Salute to America would develop into a desirable sire prospect, which typically is something only the highest level of graded stakes winners achieve, therefore he would need to be gelded at some point in the future, when it’s time for him to have a second career off the racetrack. With six weeks until his next possible race — we are waiting for the next Belmont condition book to be released for an exact target — now is the perfect time for him to be gelded. Salute to America is currently scheduled to be gelded Monday morning and we will follow up as he recovers.

Trainer Tom Morley shared with us his insight into Salute to America’s sixth-place finish today in his turf debut.

Salute to America ran an even race today to finish 6th at Belmont Park in his first race against winners and his initial start on the turf.

Ridden by Javier Castellano, Salute to America, who was 11-1 in the wagering, broke well on the dog-leg turn of the inner turf course race and then settled into seventh position on the outside of horses once the field reached the backstretch. Never more than several lengths off of the early leaders, Salute to America made a moderate move heading into the final turn to place himself in fifth position.

In the stretch of the 1 1/16-mile race, the 3-year-old ran evenly to finish nine lengths behind the winner, Saratoga Flash, in the nine-horse field.

Once we have feedback from trainer Tom Morley, we will share with our colt’s partners.

Salute to America is in the paddock for his upcoming race at Belmont Park. Good luck to his partners!

Good luck to all of Salute to America’s owner today. He was preparing for today by taking a nice nap earlier this morning 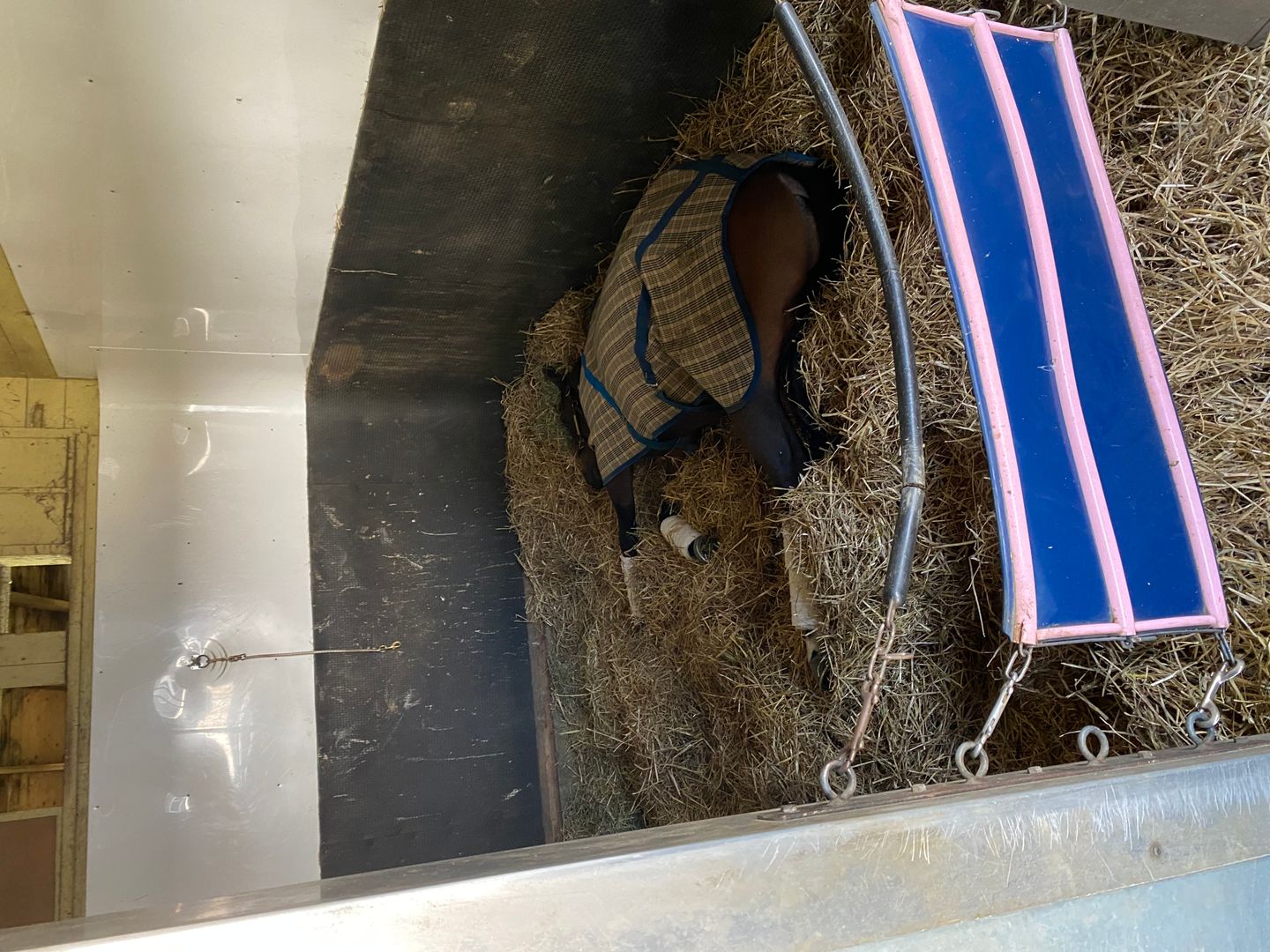 Our 3-year-old was last seen over a sloppy and sealed main track in an off-the-turf event at Aqueduct, when he graduated from the maiden ranks. As soon as Javier greeted Tom after that win, Javier said, “We need to get on the turf, he’ll go great over it.”

A subsequent result that flatters Salute to America is that the runner-up of his last race, Barrel of Quests, returned a winner on the turf on closing day at Aqueduct on Sunday.

Bohemian Ruby (30-1) broke his maiden on his 11th try last out in a lower-level maiden claimer. Has twice run on turf, but never showed enough that would prove him to be competitive against this field.

Sandro the Great (15-1) ran an impressive number on the turf in his first start for Pat Quick back in November. Broke his maiden on the dirt in his next start, but hasn’t shown much since. The switch back to turf could help, but it would be a surprise if he got the job done.

Timbuktu (8-1) closed to win on debut back in July at Saratoga, but hasn’t been seen since. Additionally, the lackluster Beyer Speed Figure of 49 will have to improve immensely to beat this class. Coming from the barn of Brad Cox who wins at 24% off the long layoff is a positive.

Rally Squirrel (4-1) ran his biggest number, a 77 Beyer Speed Figure, at Gulfstream Park this winter. He seems to like going a distance, especially two turns. The dogleg configuration here, with this race starting on the turn, could be a question mark. If he can get an uncontested lead, he could get the job done.

Mr Breadwinner (8-1) has only run on off tracks, breaking his maiden last out at Aqueduct. Turf will be a question mark, but he should run well given how he handled the sealed surfaces, particularly in his last start. Trainer Horacio DePaz in 0-14 with horses going from dirt to turf over the last year.

Saratoga Flash (6-1) keeps knocking on the door at this level. This will be his first time running over a mile and as a gelding, but he looks to be more of a sprinter type. Could be interesting to use in exotic wagers, though.

Lord Flintshire (7-2) took the winter off and looks to get into form here. Jorge Abreu took over training duties from his brother Fernando and won with him second out. Jorge is a respectable 14% with horses coming off a layoff of 60-180 days. Could win here, but will most likely need the race.

Umbria (3-1) is the morning-line favorite and the one to beat. Found good form once he hit the turf. While he likes the turf, he ran on a sloppy track last time and trainer Linda Rice is just 4% with the dirt to turf change. Tough to win from the outside post at this distance.

Uncle Curly (5-1) has the most experience in the field. Ran a huge 79 BSF in the $20,000 claiming ranks at Gulfstream last out. Meets his New York-bred counterparts here and could have a nice showing if he were to draw in.

Barleewon (12-1) has done his best running in the claiming ranks. Trainer Keith O’Brien is great with a turf horse and can step one up. Will need to draw in, but could have a shot a placing against this field.

Breadman (6-1) spent the winter in New York getting fit on the dirt. Has run against stake company three times and did not embarrass himself.

Practice Squad (12-1) will make his first start for Joe Sharp off the claim. Sharp is a decent 13% first off the claim, will need a few defections to get in.

Mr. Kringle (8-1) has done well, being in the money 11 of 24 times. Unlikely to get in, but has run big number including a 79 BSF when third in the Penine Ridge.

Convertible Freeze (6-1) is the lone Main Track Only entrant. With no rain in the forecast, he is unlikely to see the starting gate.

Salute to America makes his first start against winners tomorrow in the 8th race at Belmont Park. It will also mark the colt’s first race on the lawn as his last scheduled start on turf was washed off, a race that saw him break his maiden quite impressively.

Fees include trainer, jockey, and MRH management fees (10 percent each) in addition to race day fees such as pony to post, jockey insurance, stable bonus, etc.

Salute to America has been entered in the eighth race going 1 1/16 miles on the inner turf on Saturday, April 30th, at Belmont Park. Breaking from post 5 in the full field of 10, Salute to America will have Javier Castellano aboard once again. We will have our usual paddock lottery which you can enter here.

Salute to America worked a half mile by himself yesterday over the Belmont Park main track in 49.74 seconds. Tom Morley gave us some insight on the work and informed us that there is a possible race next week at Belmont Park. That race is a New York-Bred Allowance going 1 1/16 miles on the turf on April 30th. While it is a fast turn around, Tom believes Salute to America is in great shape and is extremely happy with the shape the turf course looks to be in at Belmont.