Going to Vegas exited her race in good order following yesterday’s second-place finish in the Grade 3 Santa Ana Stakes. She earned a Beyer Speed Figure of 89. Coming off the heels of matching her career-best Thoro-Graph number of 3 3/4 in the Buena Vista and returning off of three weeks’ rest, the visual effort was very respectable, especially in light of not receiving the most ideal trip.

Having two races in a three-week span, the current plan moving ahead will be to train up to the Grade 1 Gamely on May 30th at Santa Anita.

Above you will find a photo from yesterday’s race and an updated copy of her past performances. 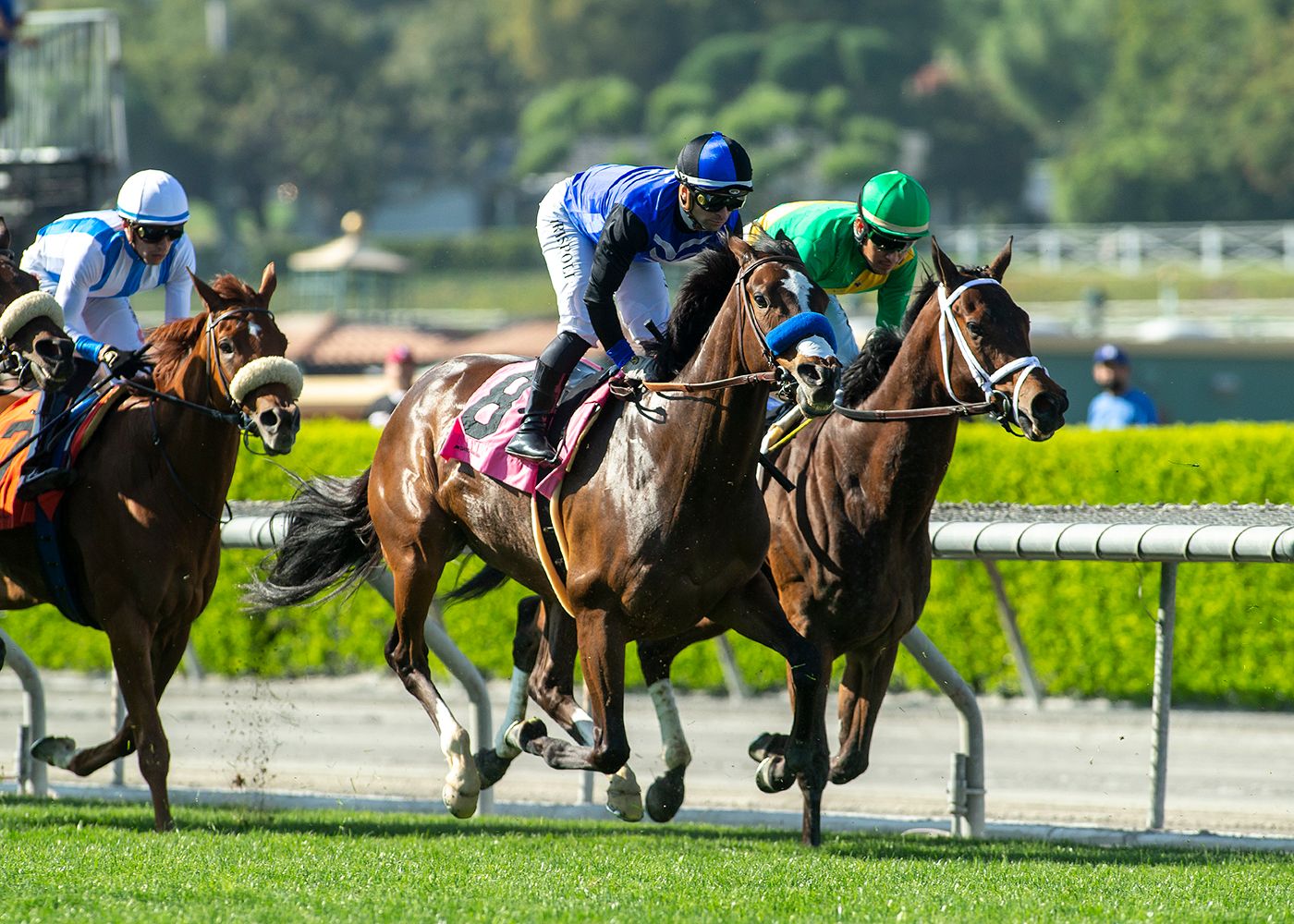 Going to Vegas had to settle for second today while being defeated by a most impressive winner in Queen Goddess in the Grade 3 Santa Ana Stakes at Santa Anita Park.

Ridden by Umberto Rispoli, Going to Vegas was in third position for much of the race, well off the early pacesetter, Quiet Secretary, who had a lengthy lead in the 1 1/4-mile turf race. In the stretch, Going to Vegas was making inroads from the rail, but didn’t have enough momentum to mount a serious charge. Running as the even-money favorite in the field of eight horses, Going to Vegas was beaten 1 1/2 lengths by Queen Goddess, who always had the jump on her.

Rispoli said after the race that he didn’t have an excuse for Going to Vegas, who he thought ran well and said she will improve off this race. You can hear his interview in the video above.

In the coming days, we will check in with trainer Richard Baltas and report back with how Going to Vegas exited her race.

Going to Vegas has entered the paddock for the Grade III Santa Ana.

Good luck to Going to Vegas and all of her owners today in the Grade III Santa Ana Stakes at Santa Anita Park. Enjoy this video of her in her stall this morning. A reminder, post time is 4:12 PM PT/7:12 PM ET.

MyRacehorse has two opportunities to take down the Grade 3 Santa Ana Stakes which goes as race 7 on Saturday’s race card at Santa Anita Park. This is a very competitive edition of the Grade 3 Santa Ana which is contested at the 1 ¼ mile distance. The field of eight will start on the down the hill turf course, having the opportunity to work out early positioning as they go by the grandstand for the first time.

Going to Vegas has been slated as the deserving morning-line favorite with odds of 9/5 as she looks to defend her title in the Santa Ana. Vegas will break from Post 7 due to the scratch of Baltas stablemate, Disappearing Act. Right outside of her will be MyRacehorse stablemate, Carpe Vinum who makes her second start off of the layoff. Both horses have been training well heading into this G3 event.

Charges Dropped (20/1) now draws the rail with the early scratch of Disappearing Act. She does come off a win in her most recent effort but will have to improve drastically to beat this company.

Quiet Secretary (20/1) will likely be the speed of the speed as this 5-year-old mare tries the 1 ¼ mile distance for the first time. Though she is a four time winner and has had a more than respectable career so far, she appears up against it here. Will be involved early.

Closing Remarks (5/2) is the lone CA-bred in the field but must be respected in this race. She does need pace to run into but looks as if she will get it. She was only three-quarters of a length behind Going to Vegas in the Buena Vista and should appreciate any added ground which she gets in the Santa Ana. On Thoro-Graph sheets she may have reacted a bit to a big effort two back.

Keyflower (6/1) is undefeated in her lone Southern California start which was against allowance company but was only beaten less than two lengths in a Grade 1 the race prior. Seems capable of taking a step forward which would be needed to be on the winning end.

Queen Goddess (6/1) comes into this turf effort off of back to back dirt tries. Did earn a Grade 1 win in the America Oaks on Opening Day at Santa Anita when the turf event was moved to the dirt. This will be her first start over the Santa Anita turf course. She clearly has ability but is tricky to gauge in here.

Neige Blanche (7/2) was fourth in this race last year. She is a seven time winner from 16 lifetime starts but has found a home at the marathon distances. While she is extremely sharp, we believe she is best with even more distance.

Going to Vegas (9/5) is returning off of three weeks following a very nice comeback effort in the Buena Vista. She is the defending champ and is clearly the horse to beat from a numbers standpoint. While she went wire to wire last year, there appears to be more speed this year and Vegas may find herself having a target in Quiet Secretary.

Carpe Vinum (12/1) fired a nice effort off of a nine month layoff last out. She needs to improve but has arguably been working the best she ever has. The added 1/8th of a mile is a bonus and should have plenty of pace in front of her to run into.

Here are the projected race day payouts for Going to Vegas’ run in the Grade 3 Santa Ana Stakes tomorrow at Santa Anita.

MRH owns 51 percent of Going to Vegas and as a result the financials contained within the graphic reflect our percentage of earnings and expenses.

In addition to our usual projections of trainer, jockey, MRH Commissions, and race day expenses, $1,974 was due for nomination, entry, and starter fees due to run in the Santa Ana (MRH portion is $1,007).

After official race statements are provided by the track and account reconciliations are performed, any adjustments will be made (i.e. additional payouts) and a detailed breakdown of race day revenues and expenses provided. Additionally, if the horse runs out of the money, payouts will be issued to your MRH wallet with the final reconciliation (typically within 30 days of the race). 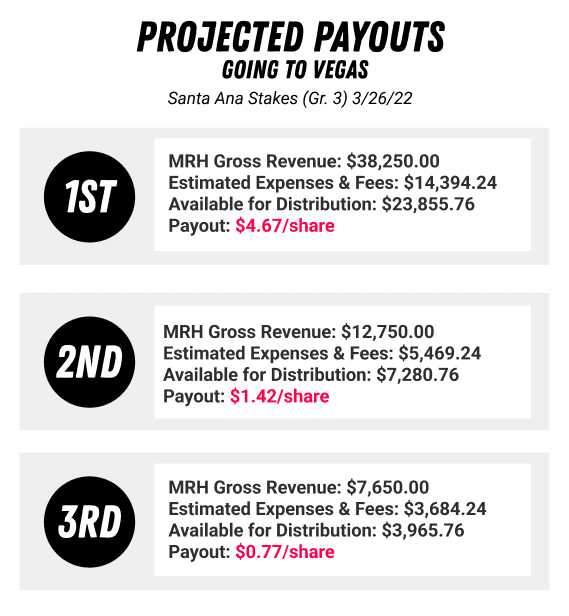 If you are interested in joining us at Santa Anita Park for the day, please sign up for the seating lottery here. We also have our usual paddock lottery which you can enter here.

Trainer Richard Baltas was pleased with how Going to Vegas galloped and gate schooled this morning. As a follow-up to our update yesterday, she will be proceeding with Saturday’s Santa Ana Stakes at Santa Anita Park.

Going to Vegas has been entered in the Santa Ana Stakes this upcoming Saturday, March 26th, at Santa Anita. The Grade III carries a purse of $125,000 and draws a field of nine fillies and mares.

Going to Vegas drew Post 8 in the 1 1/4-mile contest, which has a 4:00 p.m. PT post time. Umberto Rispoli will return in the irons as Flavien Prat has riding duties in Dubai.

Be on the lookout for a pre-race analysis and final race decision from our team later this week.