The breeding industry lost a giant when it was announced that stallion Flatter was euthanized due to the infirmities of old age on May 9, according to Claiborne Farm, where the 23-year-old had stood for his entire stud career which began in 2004.

Our acquisitions team at MyRacehorse is very bullish on the progeny of Flatter, and currently have two horses in our stable sired by him, Hero Status and Search Engine. A third, Micro Share, is a winning daughter of Upstart, who is a son of Flatter.

There was so much to like about Flatter, beginning with his pedigree. He was a son of the incomparable A.P. Indy and out of a terrific mare, Praise, who threw so many top-class runners, including Congrats, an earner of nearly $1 million. Flatter, himself, had a successful racing campaign, which saw him win four of six starts and earn black-type in graded-stakes company for Claiborne, his breeder.

At the time of his passing, Flatter is the sire of 21 graded-stakes winners and 59 black-type (non-graded races) winners. He counts among his progeny 692 winners, who collectively earned more than $84.1 million on the racetrack.

Two of his runners were recognized as champions, West Coast and Avie’s Flatter. This past Sunday, his daughter, Search Results, a full sister to our two-time winner Search Engine, earned her third graded stakes win in the Grade 2 Ruffian Stakes at Belmont Park. A day earlier, MRH runner Hero Status, a son of Flatter finished second in a Maiden Special Weight at Santa Anita Park.

“Flatter was the kind of sire you’d like to have 10 of,” Bernie Sams, Claiborne Farm Stallion Seasons and Bloodstock Manager, told the BloodHorse upon news of Flatter’s death. “He was solid and consistent, year in and year out. He started at the bottom and worked his way up to being a successful and respected stallion. He was popular among people who bred to race and was a successful commercial sire as well. He will be greatly missed.”

We send our condolences to Claiborne and to all who loved this classy horse, and look forward to carrying on Flatter’s legacy through his sons Hero Status and Search Engine, and granddaughter, Micro Share.

We are pleased to report Hero Status looked great this morning according to trainer Mark Glatt. The colt was a bit tired this morning which isn’t unexpected but ate up all his food last night.

Glatt was very impressed with his professionalism in the paddock and prior to the race. He believes this will set him up perfectly to go two turns next time out.

A solid second-place finish today from Hero Status at Santa Anita in his second career start.

Ridden by Edwin Maldonado, Hero Status was closer to the pace than he was in his debut and was part of a quartet of horses who vied for the early lead after the nine-horse field broke from the starting gate in the seven-furlong race. The opening quarter-mile went in a sizzling 21.97 seconds. Hero Status then settled off the leaders down the backstretch, but was never more than a couple lengths off the lead after a half-mile was run in a snappy 44.95.

The eventual couple-length winner, Hopper, had the jump on Hero Status and came into the stretch with the lead. Our colt lost some ground going wide, but ran gamely on to finish second to a very nice-looking winner.

Maldonado was pleased with the effort given to him by Hero Status and shares his thoughts with our West Coast Racing Manager, Joe Moran, in the attached video.

We will check in with trainer Mark Glatt in the coming days to see how our Flatter colt came out of his race and will report back.

Hero Status has arrived in the paddock for his upcoming race at Santa Anita. Wishing all of his owners good luck!

Following a great educational experience in Hero Status’s first race, the 3-year-old son of Flatter makes his second start as the 5-2 morning-line favorite at Santa Anita Park this afternoon in Race 8, which features a salty field with some interesting first-time starters among the nine-horse field. Post time is 5:10 p.m. PT.

We’ve included the DRF Race Analysis and Selections above.

Finishing third in his debut to two speed balls last month, our colt took some dirt in his face in that race while being ridden by Hall of Famer Mike Smith, who had encouraging words following that effort. Smith won’t be aboard today because he is at Churchill Downs for the Kentucky Derby card, so Edwin Maldonado has the assignment, and he is known to get his mounts into action quickly leaving the gate, so it’s likely that Hero Status, who drew post 7, will be more prominent in the early going than he had been on debut.

Smith did, however, breeze the colt for trainer Mark Glatt for this race, and the April 30th move was a terrific one — a bullet half-mile in 46.60 seconds — and signaled Hero Status is on his toes.

Today’s race is 7 furlongs, an additional eighth of a mile from his first start, which Glatt and our team believe will be beneficial to Hero Status, and is a great way to stretch the colt out incrementally, which is important for a horse who has had just one sprint start.

Of course, there is always the concern that today’s race is just three weeks after his April 16th start, but given what’s available in the condition book, and the fact that Hero Status is showing all the signs of being on his toes, Glatt, who is a super 21% with his second-time starters, and our team, believe today’s race is a logical spot for him and he should run very well.

Hunter John (12-1) will be making his first start on dirt, after three races on synthetic at Golden Gate Fields and one on turf at Santa Anita. As a son of Maclean’s Music, he’s bred to like the dirt and has been training well over it at Santa Anita. Showed speed in his last race through quick fractions, before tiring to finish third, beaten less than a length. That race was on April 24th, so this is a quick turnaround.

The Giants Candy (12-1) was no factor in his debut on the grass in March, but has worked well on the dirt since that race for Hall of Famer Ron McAnally.

Pioneering Papa (7-2) holds the top Beyer Speed Figure in this field (83). That number came on debut when he finished a well-beaten third to Taiba, who is a contender in today’s Kentucky Derby. Pioneering Papa returned to finish second in his next start, beaten 10 lengths by High Connection, a highly thought of son of Connect who is running tomorrow as the ML 4-5 favorite in Race 3 at Santa Anita. Probably easier waters here today for Pioneering Papa and it would be no surprise to see this gelding graduate.

Virat (6-1) is a first-time starter from the Phil D’Amato barn. Sire Bayern gets 17% winners on debut. Trainer fires at 17% with firsters and this colt has plenty of solid works under his belt to be prepared for his debut. An intriguing horse and can’t be overlooked to get a piece of it here.

Irish Prophet (12-1) makes his dirt debut following two races on the turf. In his last, he improved with the addition of blinkers to finish fourth, beaten three lengths. His dirt works at Santa Anita have been decent for Hall of Famer Neil Drysdale.

Anaheim (4-1) is another first-time starter in the field. Sire Twirling Candy fires at 17% with his firsters. Trainer Sean McCarthy is a solid 16% with horses on debut. His dam has six winners from 8 foals to race. Has a good foundation of works for his debut. He brought $385K as a yearling at Keeneland, so the bar is raised for him.

Magic Man (10-1) is a son of American Pharoah and makes his dirt debut after five starts on the turf. Trained now by Gary Mandella, after father Richard Mandella sent him out for his first two starts, Magic Man has had some good efforts on the grass and breezes well on the dirt. Though it’s interesting to note that Juan Hernandez, aboard for his last three starts, rides another (Hopper) in this field.

Hopper (6-1) was previously trained by Bob Baffert and is one of the horses switched to trainer Sean McCarthy’s barn while the Hall of Famer serves his suspension. Hopper makes his dirt debut after finishing sixth on the grass in his first start. He broke slowly that day and made up some ground before tiring. Last two dirt works for this assignment have been sharp. Just another in this field who certainly wouldn’t be a surprise should he graduate to the winner’s circle today. 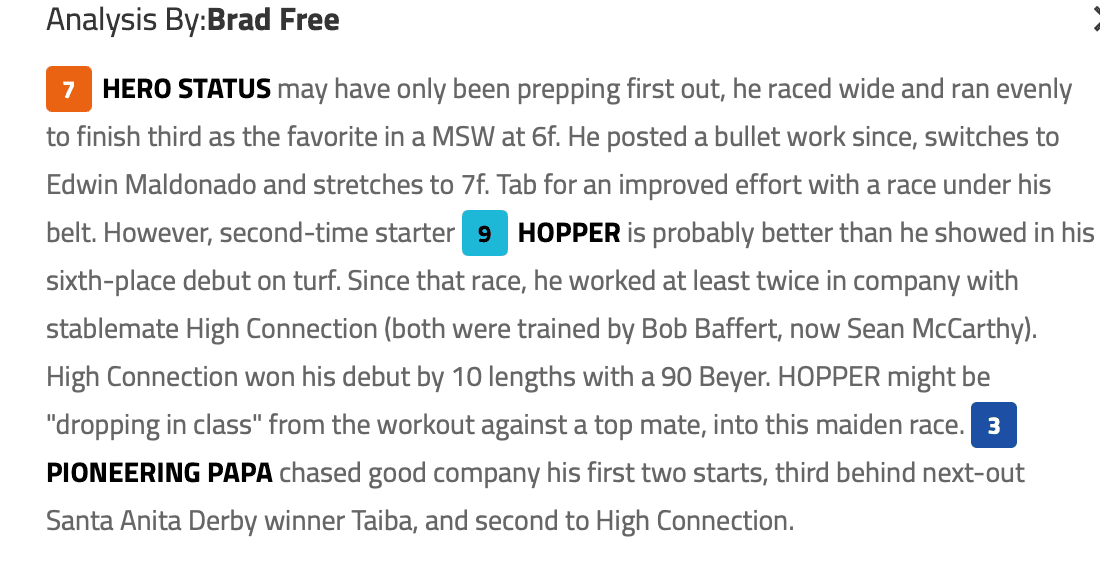 Hero Status attempts to score his first career win this afternoon at Santa Anita Park in his second career start. Race 8 is scheduled for a post time of 5:10 PM PST and carries a purse of $67,000. MRH owns 60 percent of Hero Status with partner Dan Agnew owning 40 percent. Here are additional purse details.

Fees include trainer, jockey, and MRH management fees (10 percent each) in addition to race day fees such as pony to post, jockey insurance, stable bonus, etc.

In case you missed our interactive, live chat regarding our West Coast stable yesterday, fear not! Above you can see a clip of our team discussing your horse, Hero Status. To watch a replay of the entire show, click here.

Hero Status has officially been entered in a seven-furlong Maiden Special Weight on the dirt for 3-year-olds and upward on Saturday, May 7th, at Santa Anita.

Hero Status drew Post 7 in the nine-horse field, which is carded as Race 8 and has a 4:00 p.m. PT post time. Edwin Maldonado will be in the irons on Saturday.

If you are planning on attending the race at Santa Anita, we have a paddock lottery, which you can enter here.

Hero Status has been entered for the maiden special weight going seven furlongs on Saturday at Santa Anita Park. Trainer Mark Glatt wanted to be sure he liked what he saw in both the colt’s gallop and paddock schooling (see above) before officially entering.

Jockey Mike Smith has duties riding in the Kentucky Derby on Saturday and as a result, Edwin Maldonado will ride Hero Status.

Be sure to tune into our live chat this evening for more in-depth reasoning and the thought process behind entering the colt.

Hero Status is being considered for a maiden special weight this upcoming Saturday, May 7th at Santa Anita. Entries will be taken later this morning and a final entry decision will be determined by trainer Mark Glatt.

We will provide an update as soon as a decision is made.