While it was disappointing to see Psychedelic Shack scratch on Sunday, in speaking with trainer Christophe Clement he was very adamant that firm turf is what Shack needs for optimal performances. Christophe also informed us that his barns at Payson Park are closing for the season and his remaining horses in Florida, including Psychedelic Shack, will head to Saratoga Springs in the near future. For Shack, that day is May 5th. Once any additional race targets are discussed, we will be sure to update you.

With races off the turf today at Gulfstream Park and being run on Tapeta, trainer Christophe Clement has scratched Psychedelic Shack.

In the coming days, we will update the colt’s partners on next possible race targets.

Ghostliner (3-1) ran a big 82 Beyer Speed Figure when winning last out. With a bullet work on April 26th and showing speed when breaking his maiden, it’s likely this horse will want the early lead.

Elusive Treat (5-2) is the morning-line favorite, but has struggled to find his footing since shipping to America. A three-time minor stakes winner in Europe, Elusive Treat ran almost exclusively on the all-weather surfaces. While it’s generally considered that synthetic and turf translate well to each other, it’s not always true for each individual. Would look elsewhere.

Dr. Duke (12-1) ran his best race at Saratoga eight months ago. Since that race he has struggled to find that form. Trainer Jena Antonucci’s best angle is switching from dirt to turf, winning at 17%. Could be a price that hits the board.

Meetmeinkingston (5-1) gets on to the turf for the first time here. Trainer Aubrey Maragh is 0 for 17 with turf runners in the past year. Would look elsewhere.

Full Disclosure (15-1) started out nicely on the dirt in his first couple of races, but has not been seen since a lackluster performance in December. Tries turf for the first time today and gets blinkers off. His sire, Cajun Breeze, is best with sprinters, but mostly on dirt.

Span of Control (20-1) is getting a big ask to go from $12.5K maiden claiming to a tough allowance. Well overmatched.

Tiz Romantic (6-1) steps up from the claiming ranks, but ran a huge 84 BSF last out. Tough to win from an outside post, but he showed early speed in that last race and could get it with limited speed here.

Psychedelic Shack makes his first start against winners Sunday in the 8th race at Gulfstream Park.

Fees include trainer, jockey, and MRH management fees (10 percent each) in addition to race day fees such as pony to post, jockey insurance, stable bonus, transportation from Payson Park, etc.

Psychedelic Shack is officially in the entries for Sunday, May 1st, at Gulfstream Park. The five-furlong allowance event, carded as the 8th race, will be run on the turf. Jockey Miguel Angel Vasquez is named to ride for trainer Christophe Clement. The pair drew post 2 in the field of eight runners.

If you plan on attending the race, please join our paddock lottery here.

Here are the finalized financials from Psychedelic Shack’s debut win at Tampa Bay in March.

Psychedelic Shack breezed three furlongs by himself this morning at Payson Park. Instructed to go easy, Psychedelic Shack completed the breeze in 37.40 seconds with his rider sitting still the whole way around. Miguel Clement was extremely happy with the way “Shack” breezed and was even happier to report that Psychedelic Shack returned without even a trace of blood in his post-race endoscopic exam. Miguel added we will continue to move forward with the hopes of making a race on May 1st at Gulfstream Park. 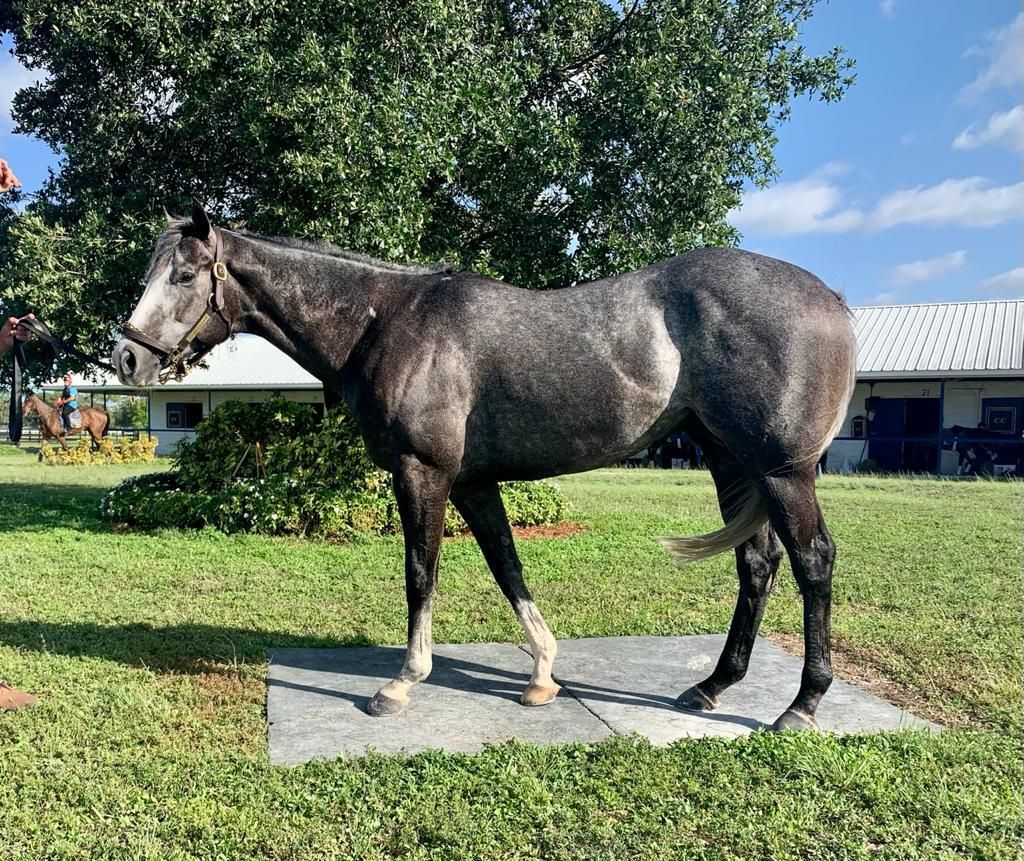 In case you missed our live, interactive chat with MyRacehorse’s resident veterinarian Dr. Berk, we’ve got you covered with a clip of him discussing Psychedelic Shack’s EIPH episode a couple weeks ago. The whole chat can be seen here.

He will receive an easy week, and will be treated to help him recover from this episode.

Psychedelic Shack exited his race in very good order and Christophe Clement was happy to report that the stiffness he saw on Sunday post-race, worked itself out once the colt returned to the track and jogged yesterday morning. We will take our time with Psychedelic Shack in planning his next race, as Clement’s stable will soon shift from Florida to the Northeast. We will keep his partners updated on future race targets as they develop.