The breeding industry lost a giant when it was announced that stallion Flatter was euthanized due to the infirmities of old age on May 9, according to Claiborne Farm, where the 23-year-old had stood for his entire stud career which began in 2004.

Our acquisitions team at MyRacehorse is very bullish on the progeny of Flatter, and currently have two horses in our stable sired by him, Hero Status and Search Engine. A third, Micro Share, is a winning daughter of Upstart, who is a son of Flatter.

There was so much to like about Flatter, beginning with his pedigree. He was a son of the incomparable A.P. Indy and out of a terrific mare, Praise, who threw so many top-class runners, including Congrats, an earner of nearly $1 million. Flatter, himself, had a successful racing campaign, which saw him win four of six starts and earn black-type in graded-stakes company for Claiborne, his breeder.

At the time of his passing, Flatter is the sire of 21 graded-stakes winners and 59 black-type (non-graded races) winners. He counts among his progeny 692 winners, who collectively earned more than $84.1 million on the racetrack.

Two of his runners were recognized as champions, West Coast and Avie’s Flatter. This past Sunday, his daughter, Search Results, a full sister to our two-time winner Search Engine, earned her third graded stakes win in the Grade 2 Ruffian Stakes at Belmont Park. A day earlier, MRH runner Hero Status, a son of Flatter finished second in a Maiden Special Weight at Santa Anita Park.

“Flatter was the kind of sire you’d like to have 10 of,” Bernie Sams, Claiborne Farm Stallion Seasons and Bloodstock Manager, told the BloodHorse upon news of Flatter’s death. “He was solid and consistent, year in and year out. He started at the bottom and worked his way up to being a successful and respected stallion. He was popular among people who bred to race and was a successful commercial sire as well. He will be greatly missed.”

We send our condolences to Claiborne and to all who loved this classy horse, and look forward to carrying on Flatter’s legacy through his sons Hero Status and Search Engine, and granddaughter, Micro Share.

It is the start of the Dante Festival today at York, so it is inevitable that Dubawi will have a runner!

Life Of Dreams won a Newbury maiden first time out, making her a 10/1 shot for the Cazoo Oaks. It will be interesting to see what price she will be after her race.

We’re wishing a Happy Mother’s Day to Cayala, the dam of our very own Provocateur, a stakes-winning son of Into Mischief who is on target to run in next Sunday’s Gold Fever Stakes at Belmont Park! Cayala is in foal to Authentic — a son of Into Mischief — and is due to give birth in a couple weeks. She’s certainly looking terrific in these recently taken photos. 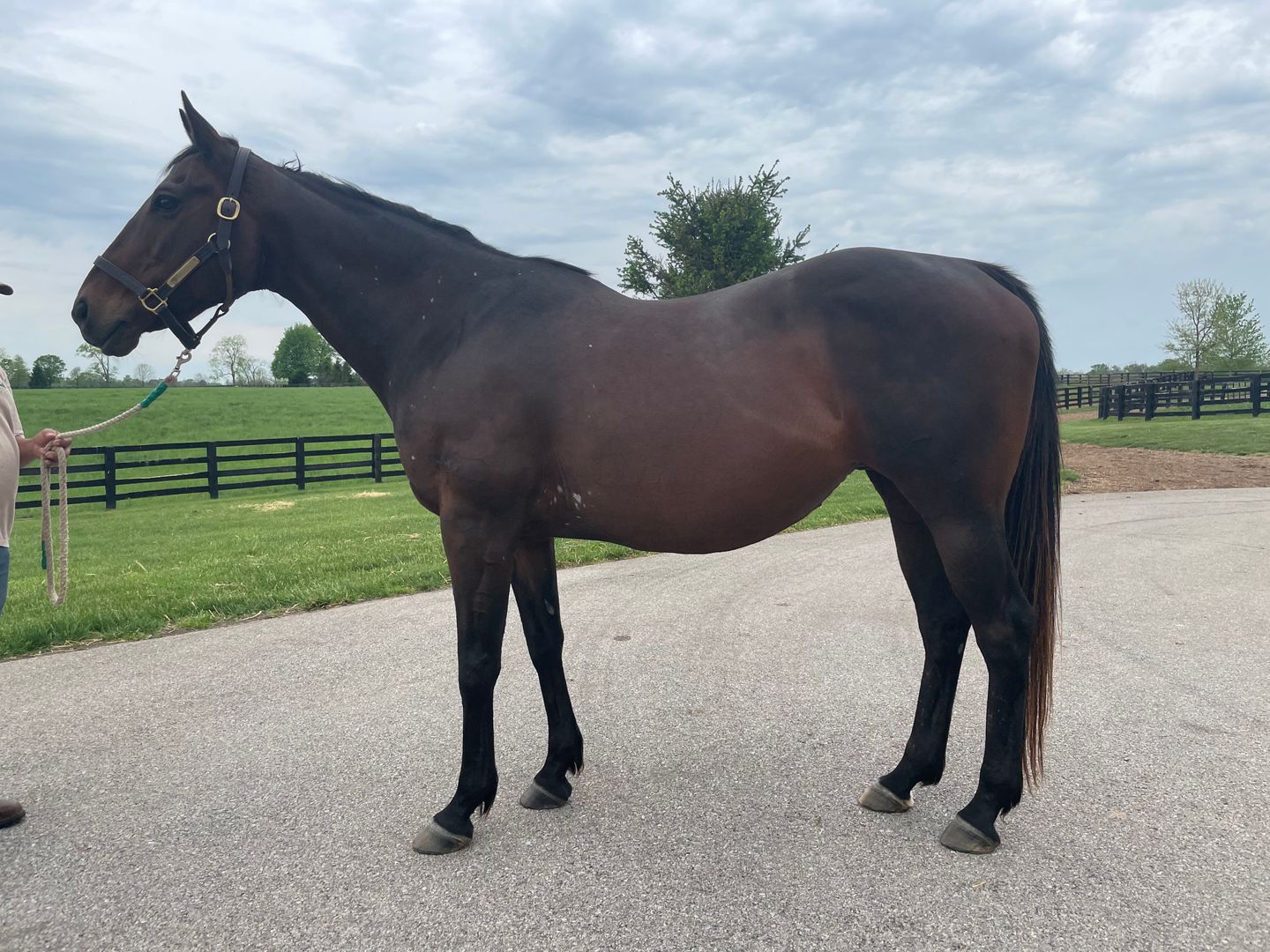 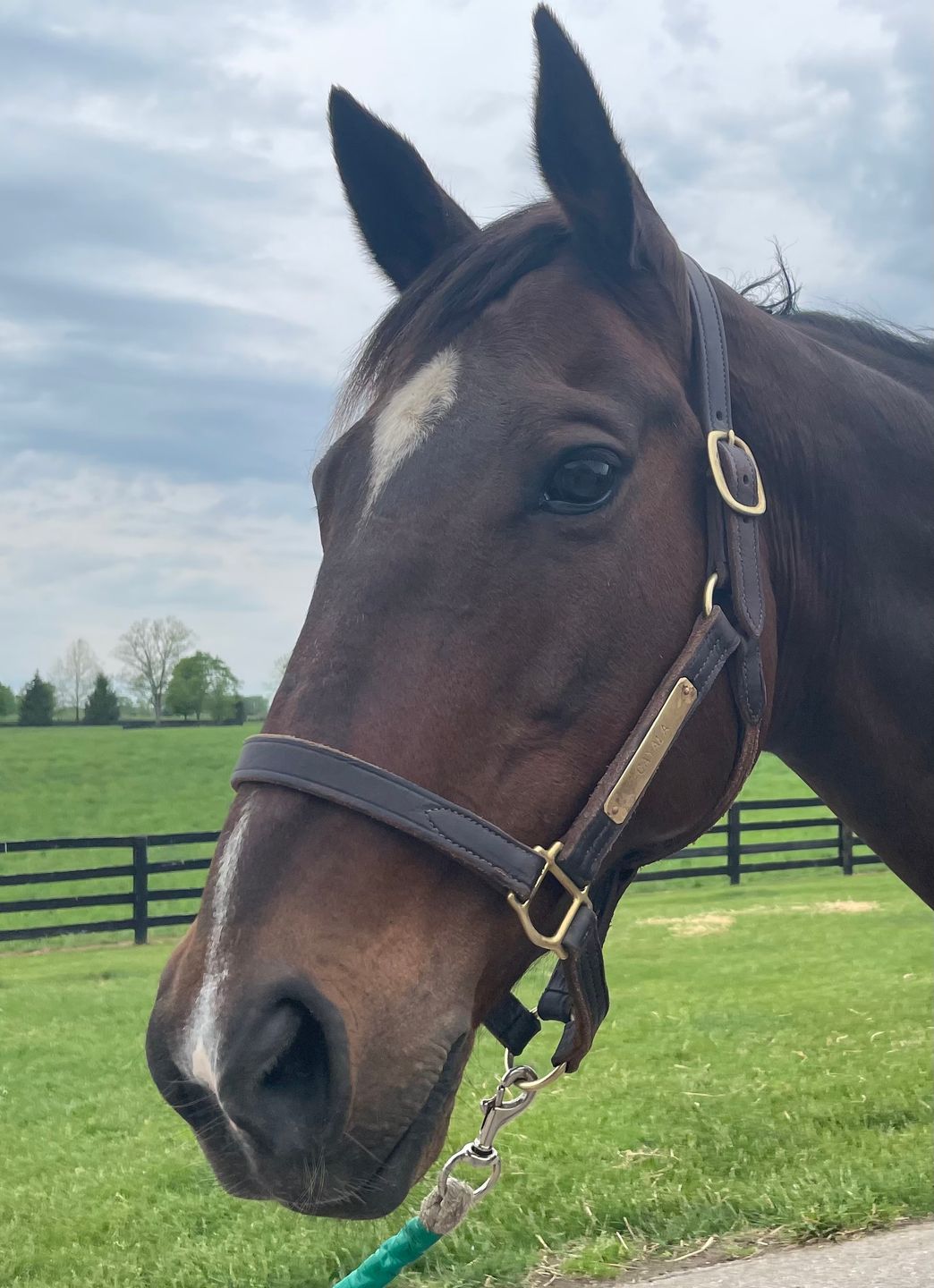 We stopped by Taylor Made Farm yesterday and had the exciting opportunity to see one of Authentic’s babies out of a mare named Wicked Lick, who was a graded stakes-placed runner. The foal was 148 pounds when he was born and Taylor Made reported he was one of the biggest babies they have foaled on the farm.

We’ve been getting inquiries from our partners about the number of foals sired by Authentic. We understand the excitement and anticipation concerning this, but, unfortunately, we cannot provide an exact number of foals at this time. Here’s why: There is a significant lag time between the birth of a live foal and formal registration. First, the birth of a live foal first must be reported by breeders to The Jockey Club within 30 days. Then within 3-4 months of the live foal being reported, a genetic typing kit and registration application are sent from The Jockey Club to the breeder for completion. Once the process is completed, a formal registration is documented. Given that Authentic bred 200-plus mares last year and foaling season ranges from January to June, there would be a significant fluctuation in reported amounts until the final count at the end of the summer/early fall.

The good news is that a number of breeders do remit payment for the stud fee before the process is fully completed, so in the coming months, we’ll start to get a clearer picture on the year one live foal totals.

As always, we’ll pass along pertinent updates to Authentic partners in the meantime.

Check out this handsome foal by Authentic, a colt out of a half-sister to 2019 Breeders’ Cup winner and 2-year-old champion filly, British Idiom. This stunner was born at KatieRich Farms in Midway, Ky. His daddy also has four white socks, but his son is sporting a bit more white coverage on his legs as you can see!

As Straight No Chaser nears a return to galloping with an eye on resuming breezing, not long after, the journey to get this son of Speightster to the races begins in earnest.

To date, Speightster’s top performer is multiple stakes winner Door Buster, who is the odds-on favorite in an allowance race tomorrow evening (Race 7) at Charles Town in West Virginia. A winner of six races, Door Buster enters this assignment fresh off an allowance race victory, and has won three stakes in the last year (the attached video shows one of the filly’s impressive stakes wins). Another one of Speightster’s progeny, among the 8 who are scheduled to compete at racetracks across the country this weekend, is Nerves of Steel, a stakes-placed runner, who is entered at Santa Anita in an allowance race (Race 5) on Saturday.

For the connections of the stallion Speightster, seeing more progeny arriving at the races is bittersweet, since the young and talented sire lost his life in February after fracturing a leg in a freak stall accident at Northern Dawn Stallions in Canada.

At the time of his passing, Speightster was only 10 years old, and was about to begin his sixth year at stud. The son of the very talented champion sprinter Speightstown had only arrived six weeks earlier at Northern Dawn Stallions, following his relocation from WinStar in Kentucky.

It was a crushing blow for Jay and Christine Hayden, whose purchase of Speightster was their first foray into stallion ownership. At the time of his death, Jay Hayden told the BloodHorse, “He was a stallion that really fit Ontario because his female family is so top heavy with top Canadian horses, the family of Dance Smartly and Smart Strike. Here we were the first week in February and he had north of 40 mares already, which is unheard of in Ontario because breeders want to pick their stallions after their foals are on the ground. It has hardly sunk in.” For the full story from the BloodHorse, please click here.

As a racehorse and a sire, Speightster was something special. On the racetrack, he was undefeated in his first three starts, including a victory in the Grade 3 Dwyer Stakes at Belmont Park, where he made quick work of his rivals with his 2 1/2-length victory. In the breeding shed, the gorgeous chestnut, who strongly resembled his sire, Speightstown, made a splash when his first crop reached the races and he was among the top 10 freshman stallions in North America in 2020. He had an even better year in 2021, cracking the top five as a second-crop sire with his progeny earning more than $4.2 million on the racetrack.

We’re excited to see what Straight No Chaser has in store for his partners when he reaches the races, and look forward to him carrying the banner forward for Speightster and adding to the sire’s legacy.