“A lot like Quality Road and his offspring I’ve had in the past. She’s a pretty filly with an intelligent head.” – Brad Cox, trainer

An ultra-attractive 2-year-old daughter of powerhouse sire Quality Road and eligible for a $2 million bonus, Who Runs the World is already making her presence known in the Keeneland barn of two-time Eclipse Award winner Brad Cox. Cox’s expertise with female runners is well-documented as he fires at a lofty 26% with fillies and mares on all surfaces. To boot, three of his five Eclipse Award winners were ladies in his barn: Kentucky Oaks winner Monomoy Girl, and Breeders’ Cup winners British Idiom, and Covfefe. This filly’s mother, Lucy N Ethel, roared out of the gate as a 2-year-old to win her first two starts and followed with three additional wins in stakes company as a 3-year-old, including a pair of coveted graded stakes wins! Click here to view Who Runs the World in action at Keeneland last week (outside horse).

Curated from the elite Fasig-Tipton Saratoga Sale as a yearling, Who Runs the World is eligible for a $2 million bonus* paid out to MyRacehorse owners if she were to win the 2023 Kentucky Oaks, a race won by Cox two times in the last four years. Click here to learn more about Who Runs the World and become an owner today! 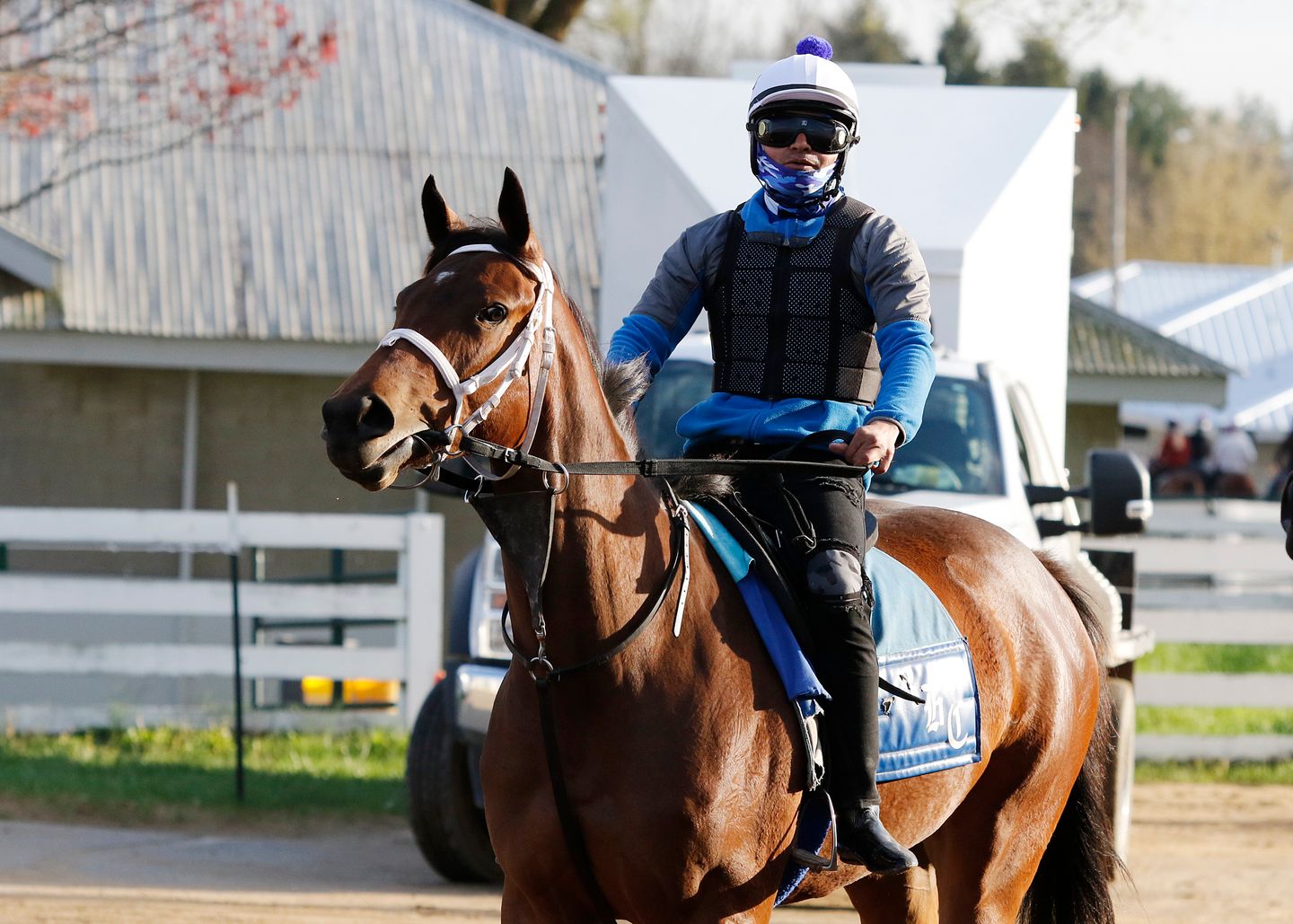 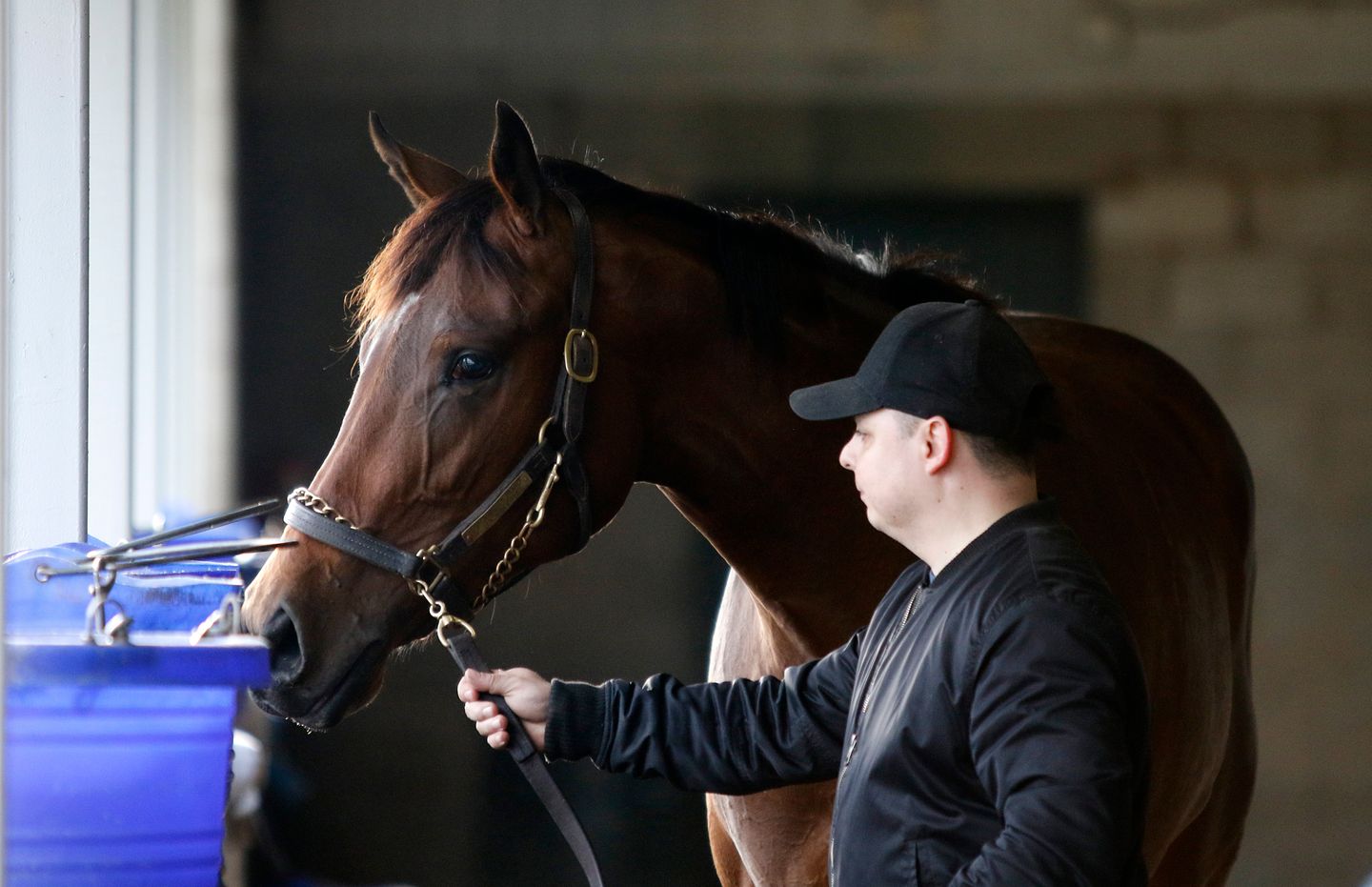 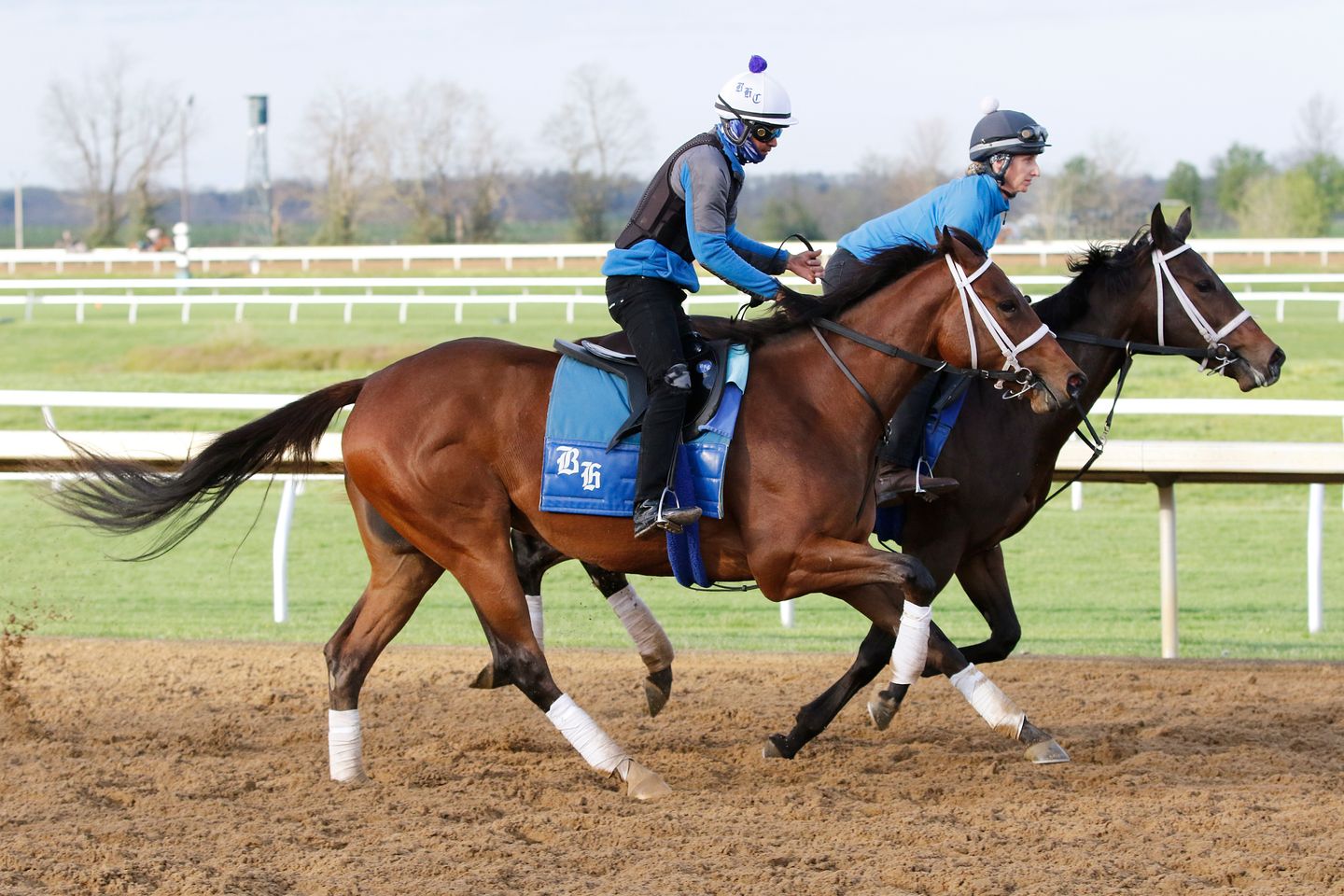 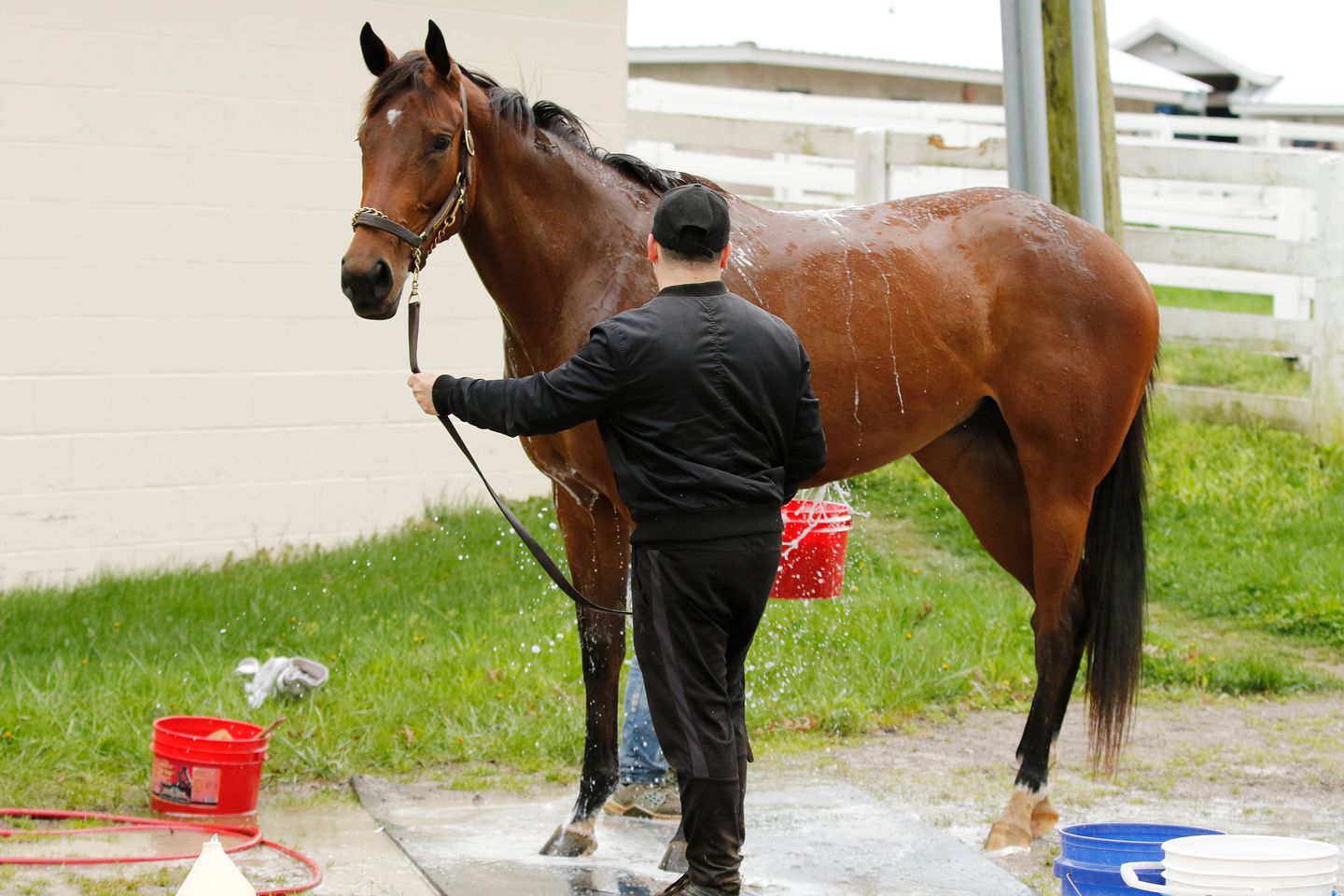 Enjoy instant racing action with Celebrity News, a NY-bred 3-year-old filly by Grade 1 producing sire Laoban, debuting this Friday at Aqueduct! Celebrity News has been working with some of trainer George Weaver’s better open company horses and is primed for her first race. Check out her last two breezes from March 18th (inside horse, above) and March 12th (inside horse).

Eligible for the lucrative NY-bred program, where the competition is often softer than what she’s been facing in the mornings, George expects a very nice performance this week (click here to watch a recent interview with George about our filly’s upcoming debut). With Manuel Franco in the irons, one of the leading riders at the Aqueduct meet with a 20% win percentage in 2022, Celebrity News will break from post six of nine. As we see often with the New York program, purse money is attractive and Friday’s race boasts a $70,000 purse for a Maiden Special Weight at Aqueduct. As an owner, you will be eligible to enter the paddock lottery for a chance to join Celebrity News in the paddock ahead of her debut race, located under the events tab in the navigation bar.

If our filly puts in a strong performance Friday, she could be pointed toward the $200,000 Park Avenue Stakes on April 24th. Become an owner today or add to your position in Celebrity News before post time on at 3:23 PM EST on Friday by clicking here!

Ranked fourth on the Northern Hemisphere leading sire list, American Pharoah is simply on fire with a fresh Grade 1 winner in As Time Goes By (winner of the G1 Beholder Mile) and a Grade 2 winner in MyRacehorse’s Forbidden Kingdom who romped in the G2 San Felipe at Santa Anita Park on Saturday. Forbidden Kingdom bested the field by 5 3/4-lengths, earning a berth into this year’s Kentucky Derby in the process. His effort earned him a career-best Beyer Speed Figure of 98, which is the second-highest this year in his division!

Fuel your American Pharoah fever with what could be his next star! Three Jewels is part of the MyRacehorse Chad Brown Bundle, a trio of top-bred 2-year-olds destined for the training program of 4x Eclipse Award-winner, Chad Brown. Not only is Three Jewels sired by Triple Crown Champion, American Pharoah, but he is also from the family of Triple Crown winner, Justify. With the poetry of motion and sensibility of his father combined with the regal lineage of his mother, this colt is something special.

Limited shares remain of the Chad Brown Bundle. Click here to become an owner of this precocious American Pharoah colt!

We journeyed across the Atlantic to acquire this filly from the 2021 Tattersalls October sale, Europe’s premier yearling auction house. Splashdown ’20 will join the barn of Chad Brown, who is the winningest trainer of both the Breeders’ Cup Juvenile Fillies Turf and Filly & Mare Turf, with a combined record of nine victories. Four of the nine winners were sourced from Europe, including Tattersalls graduate Newspaperofrecord, who won the 2018 Juvenile Fillies Turf. Another Tatts graduate, Aunt Pearl, won the 2020 edition of that race and was sourced by the same agent we have partnered with on this filly.

With the proven record of Tattersalls’ graduates on American soil, an exciting pedigree, plus terrific purse money for U.S. turf horses, the ownership journey with this filly is full of promise! Become an owner of Splashdown ’20, one of three horses featured in the Chad Brown Bundle, for $234/share.

MyRacehorse and Spendthrift Farms’ son of American Pharoah, Forbidden Kingdom, was dominant on Saturday in the G2 San Felipe (replay here) at Santa Anita. He is now pointing towards the Derby trail for trainer Richard Mandella. If you missed out on him, you are definitely not going to want to miss out on our latest offering by the same sire, Three Jewels!

Three Jewels is an athletic colt from the family of Triple Crown Champion Justify and sired by Triple Crown winner, American Pharoah. A carefully calibrated match made by Dixiana Farm, an elite breeding operation with a proven track record of producing and raising top racehorses. The Dixiana team was so confident in this cross, they partnered with us as Co-Owners of this promising colt. Three Jewels has the poetry of motion and sensibility of his father, combined with the regal lineage of his mother; he’s truly a rare gem you don’t often find in sales’ prospects! Destined for the training program of 4x Eclipse Award-winning trainer, Chad Brown, Three Jewels has the ultimate setup for stardom.

Become an owner or add to your position of Three Jewels, one of three horses featured in the Chad Brown Bundle, for $234/share, by clicking here!

Mrs. Whistler received a big update to her pedigree on New Years Day as her half-sister Elle Z romped in the Nelson J. Menard Memorial Stakes at the Fair Grounds. Drawing away to win by five lengths, the daughter of City Zip won with ease. You can watch the replay here (Race 8 at Fair Grounds: 1/1/22)

Meanwhile, Mrs. Whistler continues to train with vigor in the Florida-based stable of trainer Saffie Joseph Jr. On January 1st, Mrs. Whistler registered her first half-mile breeze, completing the four furlong work in 48.30 seconds. She is on target to debut at Gulfstream Park in South Florida in approximately 6-8 weeks and hopes to follow in her older sister’s hoofprints as a stakes caliber filly.

To purchase shares in Mrs. Whistler or to add to your position, click here.

Mrs. Whistler has been flawlessly ramping up her workout routine under trainer Saffie Joseph Jr. in preparation for her career debut in the next 4-6 weeks. With Florida racing in full swing, now is the perfect time to get involved with a Florida-based filly like this one. In addition to her impressive bullet works on 12/24 and 12/11 (watch above, she’s on the outside with that nice big stride!), Mrs. Whistler is trained by Saffie Joseph Jr. who is one of the nation’s young promising trainers and has a career 26% win rate with fillies on the dirt. Click here to become an owner or add to your position today! 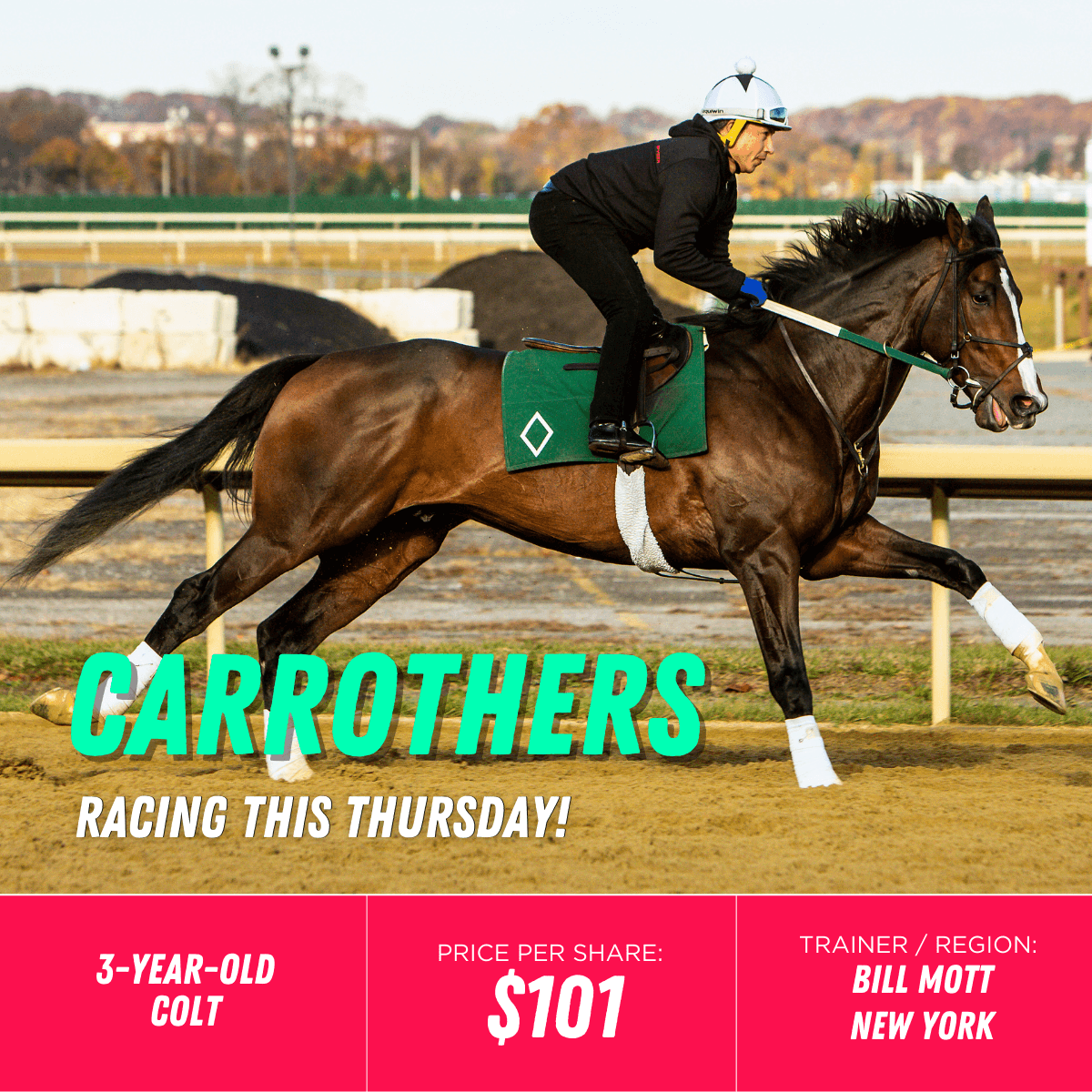 The MyRacehorse stable has been on fire over the last two weeks with 4 wins, 4 seconds, and 2 thirds from 14 starts! There’s never been a better time to get in on the action with Carrothers, a two-time winner previously raced in Europe. Trained by Hall of Famer Bill Mott, a trainer known for his proven success with European imports, Carrothers will make his stateside debut in an $82,000 allowance this Thursday at Aqueduct. Mott trained Breeders’ Cup Champion, Theatrical, and more recently stakes winners Capla Temptress, Lady Lara, Suffused, and Tuttipaesi.

Watch one of Carrothers’ impressive victories from overseas (horse #6). Learn more about what went into acquiring Carrothers and how our Racing Management team assesses his American debut in the full preview here.

With the right man for the job and a colt who has been working bullets, Thursday is gearing up to be the start of a big campaign heading into 2022. Become an owner of Carrothers before post time at 3:44 p.m. ET Thursday! Click here to buy now or add to your position!

Best of luck to the MyRacehorse owners of our three 2-year-olds making their debuts this weekend from coast to coast. Salute to America, Micro Share, and Vow will all make their first starts from Aqueduct to Del Mar to Churchill Downs. Details below!

Friday: Salute to America will debut at Aqueduct for Tom Morley in a $70,000 maiden special weight with Kendrick Carmouche in the irons. If you’d like to follow along and cheer on your fellow MyRacehorse owners, post time is at 2:14 p.m. ET.

Saturday: Micro Share makes her first start at Del Mar for trainer Richard Mandella in a $70,000 maiden special weight as well. Hall of Fame jockey Mike Smith is in the irons, and post time for the race is 6 p.m. ET / 3 p.m PT.

Sunday: Vow, a daughter of Union Rags, is debuting at Churchill Downs. In training with Al Stall (infamously known for being the only trainer to beat Zenyatta with Blame in the 2010 Breeders’ Cup Classic), Vow has been progressing nicely in her training. With Colby Hernandez in the irons, Vow’s race will go off at 2 pm ET / 11 a.m. PT as race 3 on the card. Vow is the only 2-year-old of this weekend’s debut trifecta that is still for sale, so if you’re looking for instant action, click here to buy a share in Vow!

Looking for instant action? Don’t miss Duke of Love, debuting today in a $126,800* maiden allowance at Woodbine Racetrack in Ontario! Duke of Love’s most recent breeze was five furlongs in 1:00.80. With a new bit and the addition of blinkers last breeze, Duke of Love was hyper-focused and blazed by his workmate with ease. Hall of Fame trainer Josie Carroll was thrilled with the work, and Duke of Love has been installed as the second choice in the maiden allowance. Click here to purchase a share in Duke of Love prior to his race today!

Over the last two years, trainer Josie Carroll has a 21% win rate with first-time starters, and hot freshman sire Cupid wins at an above-average 16% with his debuting progeny. With Justin Stein in the irons, the jockey/trainer combo has a 25% win rate.