Sire Update: Maclean’s Music, sire of MyRacehorse Magical Ways, had another headlining weekend with his son Jackie’s Warrior who defeated highly-regarded Life is Good in the G1 H. Allen Jerkens Memorial Stakes at Saratoga. This was Jackie’s Warrior’s third Grade 1 victory and fifth Graded Stakes victory of his career. Jackie’s Warrior will retire to Spendthrift Farm upon the conclusion of his racing career.

With Maclean’s Music progeny continuing to heat up, we’re thrilled to have Magical Ways trained by hall-of-famer, Bill Mott currently available in the MyRacehorse stable. Magical Ways just completed his second half-mile breeze at Belmont this week and the Mott Team reports they have been pleased with his progression in training since he joined the barn earlier this summer. 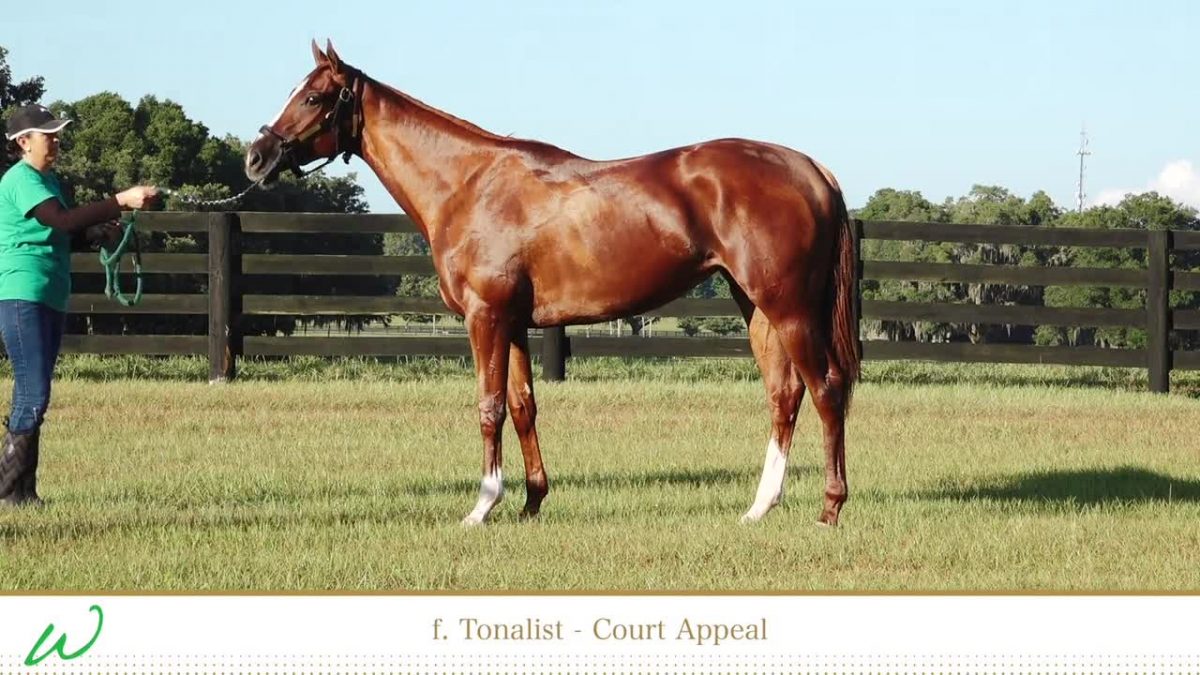 After purchasing Mrs Whistler out of the 2-year-old in training sale, the MyRacehorse team decided to give her a much-deserved break to enjoy a few weeks of turnout time while at Woodford Thoroughbreds, just outside of Ocala, Fl. She has since returned to training and Mrs Whistler began jogging two weeks ago and has now progressed to galloping.

Please enjoy this video of her that we received from Woodford Thoroughbreds this morning.

Social Dilemma has been entered into an allowance race at Churchill Downs on Tuesday, April 27th. The race is one mile on the turf and is carded as the sixth race of the day which is scheduled to run at approximately 3:18 pm ET. Purse is $118,000. Jockey Colby Hernandez will be in the irons and Social Dilemma drew post position 10 in a ten horse field.

Churchill Downs has provided MyRacehorse with very limited seating. We will be posting a race day event under the “Events” tab for those interested to sign up for the lottery in the near future. 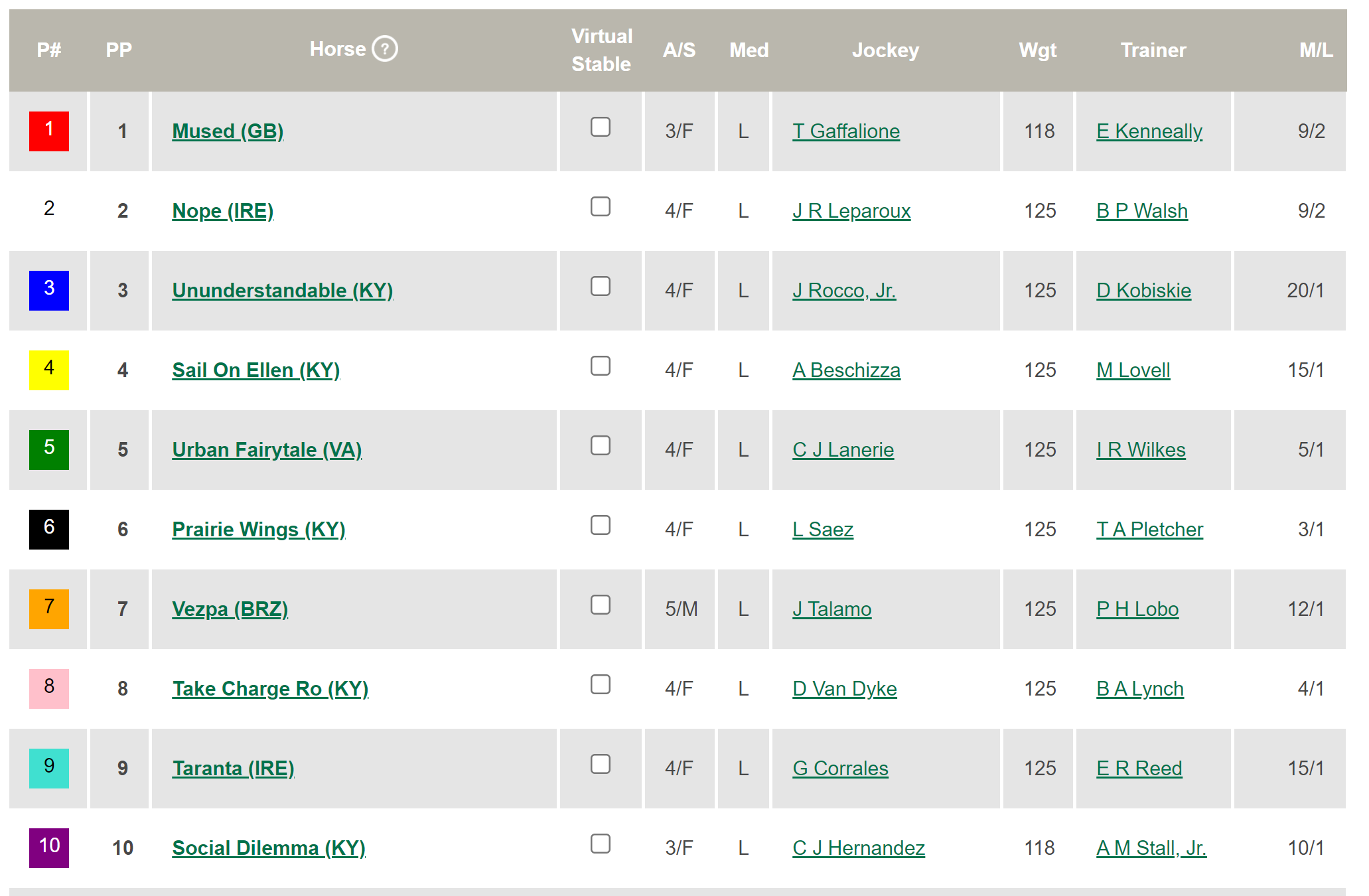 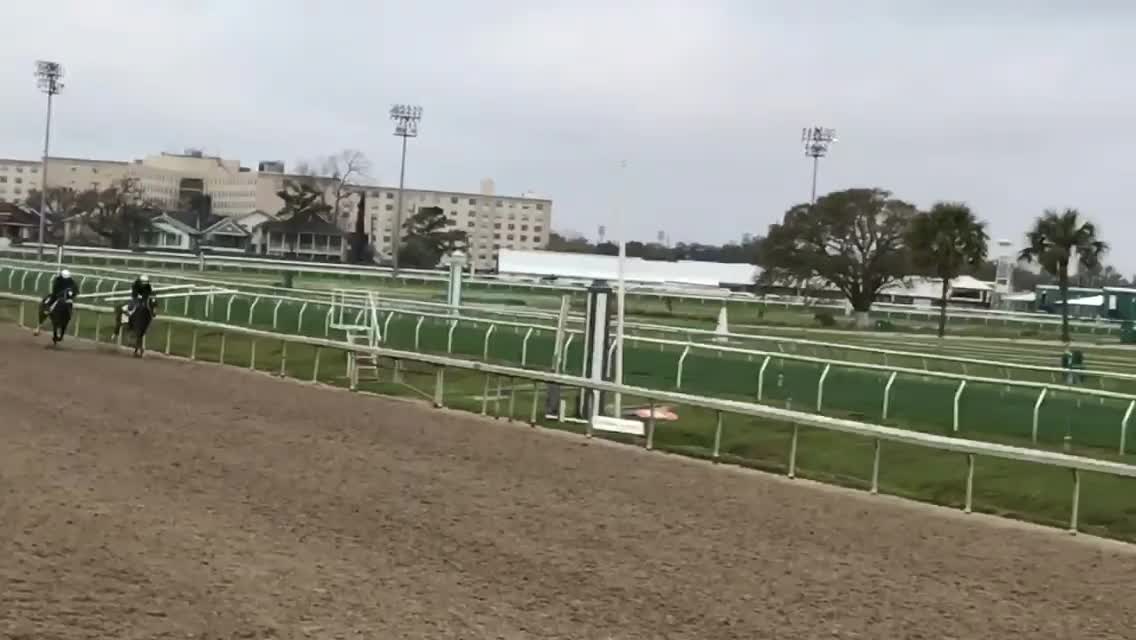 His Glory (outside) worked five furlongs this morning over the Fair Grounds dirt track. The 4-year-old daughter of Mineshaft worked in company, covering the ground in 1:03.60.

Trainer Joe Sharp has entered His Glory in the Tom Benson Memorial Stakes at Fair Grounds on March 20. This race is for fillies and mares, 4 years old and upward going 1 1/16 miles on the Albert Stall turf course with a purse of $150,000. His Glory drew post position 1 in a full field of 13 horses. Jockey Adam Beschizza will be in the irons.

Monomoy Girl returns to the winner’s circle in her 2021 debut in style, taking the Grade 3 Bayakoa Stakes at Oaklawn Park today. The 6-year-old daughter of Tapizar broke well and was four wide going into the first turn and laid third off of the leader, Our Super Freak, until jockey Florent Geroux asked her to pick up the pace around the far turn. Once she made her move, it was her race for the taking and she won by two lengths. Her time in the 1 1/16-mile dirt race was 1:45.92.

Trainer Brad Cox reported Monomoy Girl will ship back to her homebase at the Fair Grounds where she will be prepared for the $1 million, Grade 1 Apple Blossom Handicap at Oaklawn on April 17.

Click here for the link to purchase winner’s circle photos. Use code: MyRacehorse for a 15% discount good for the next 24 hours only. 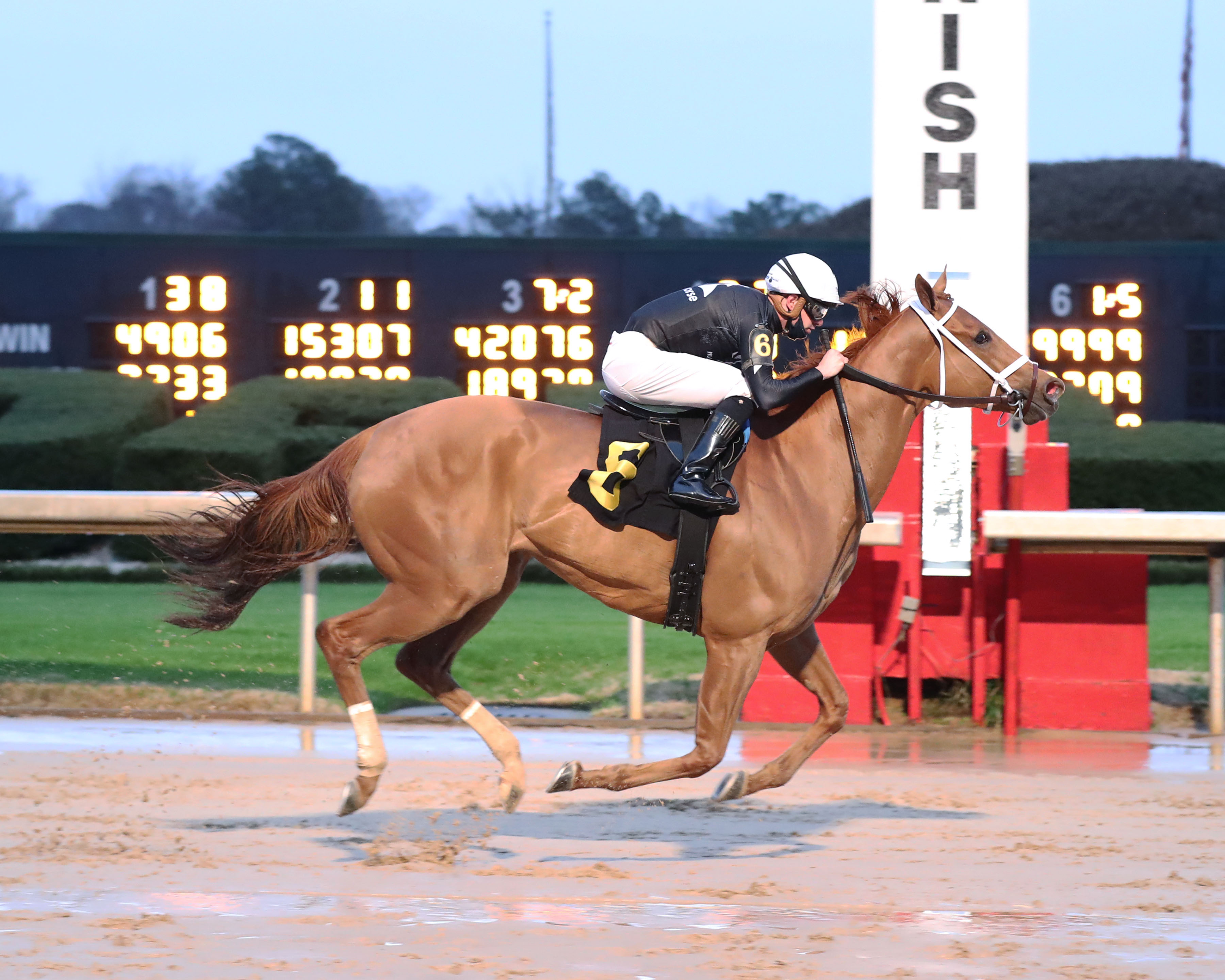 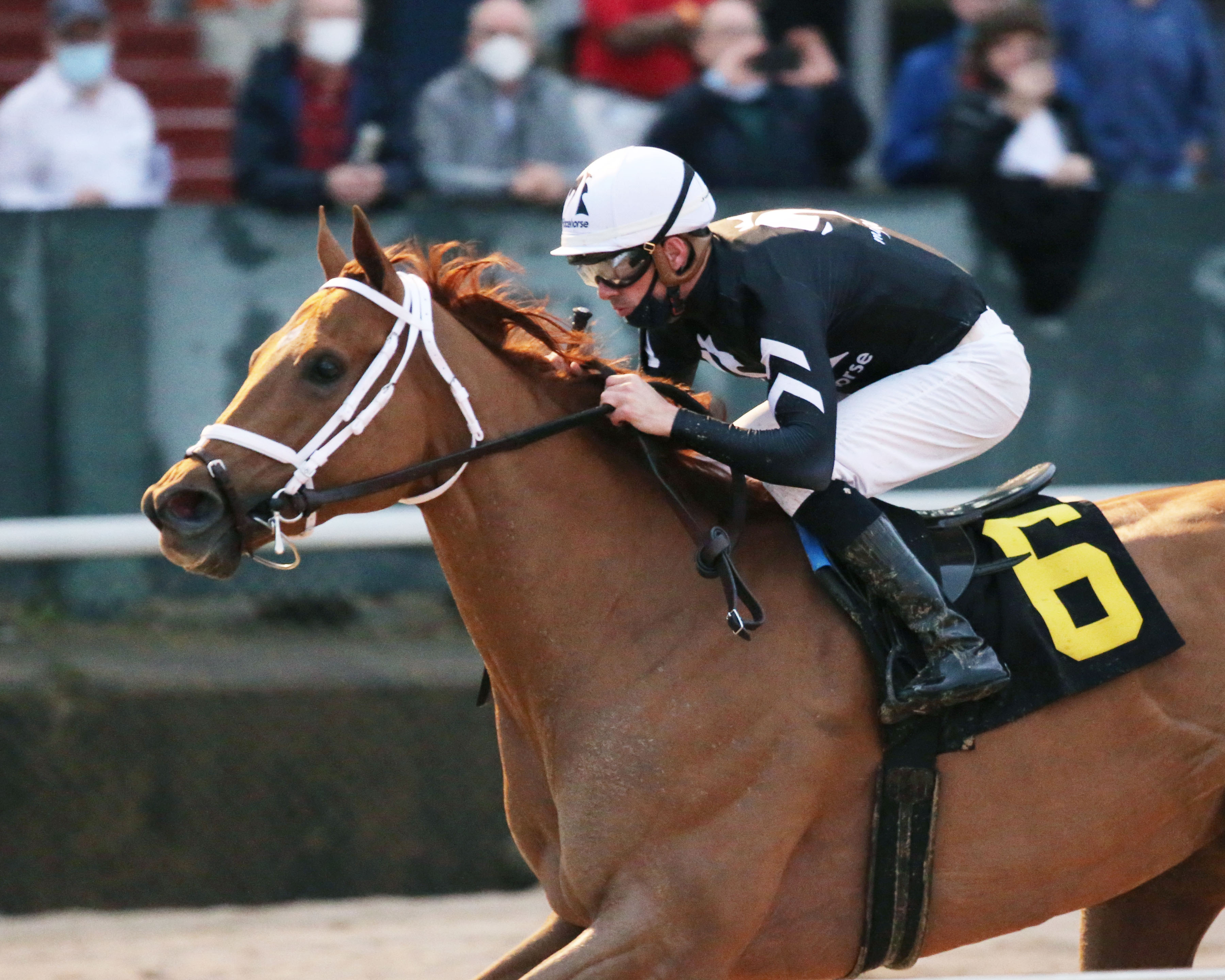 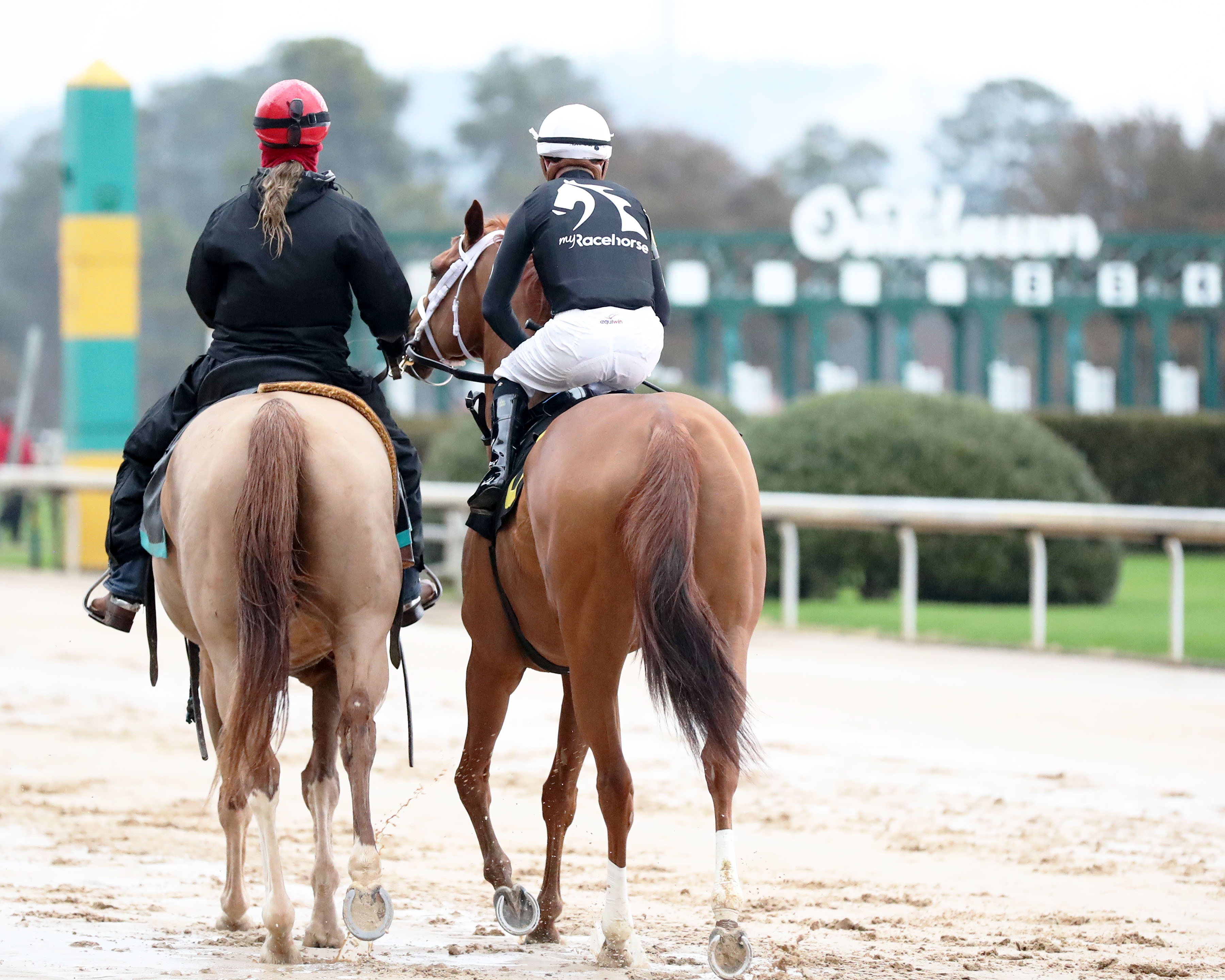 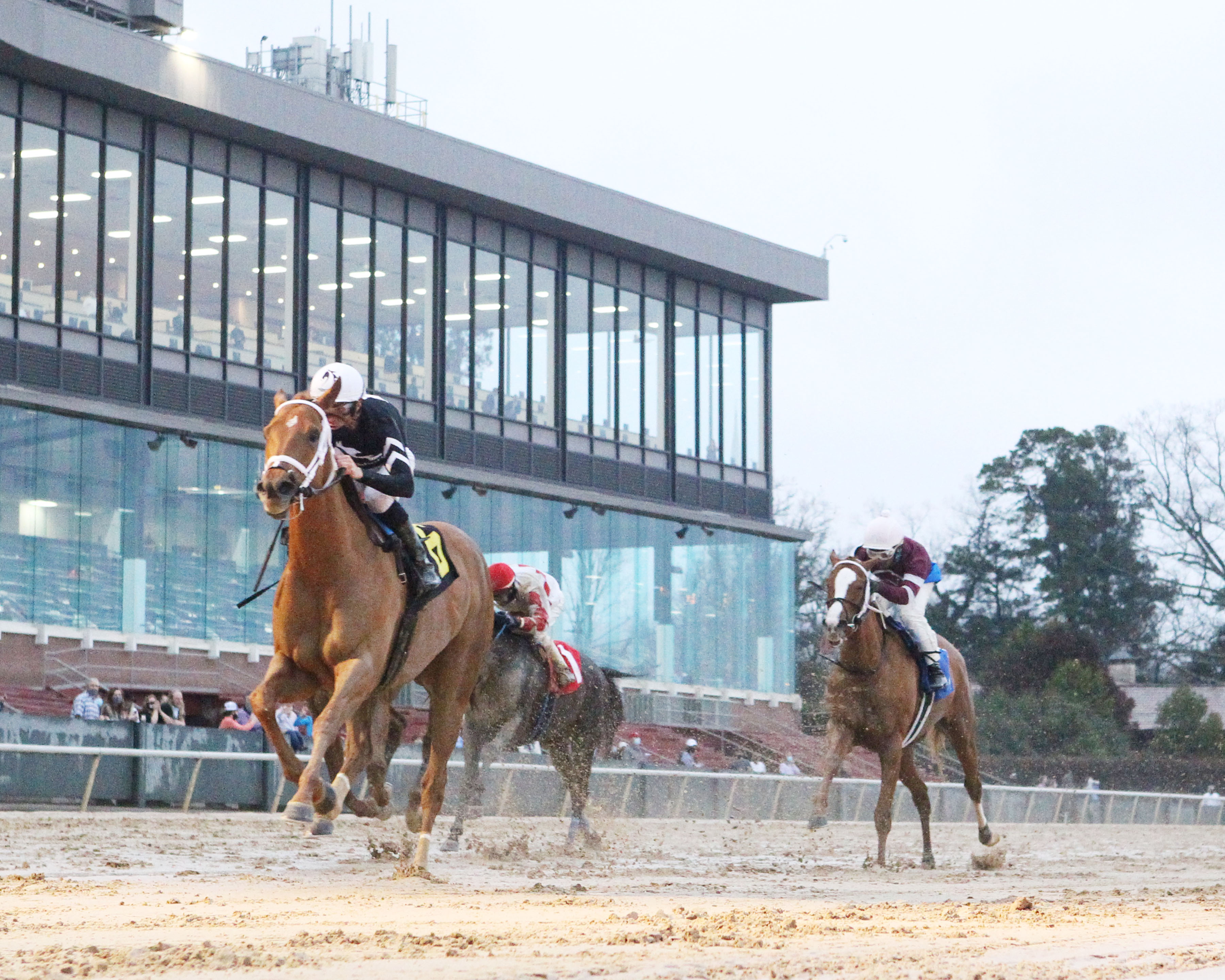 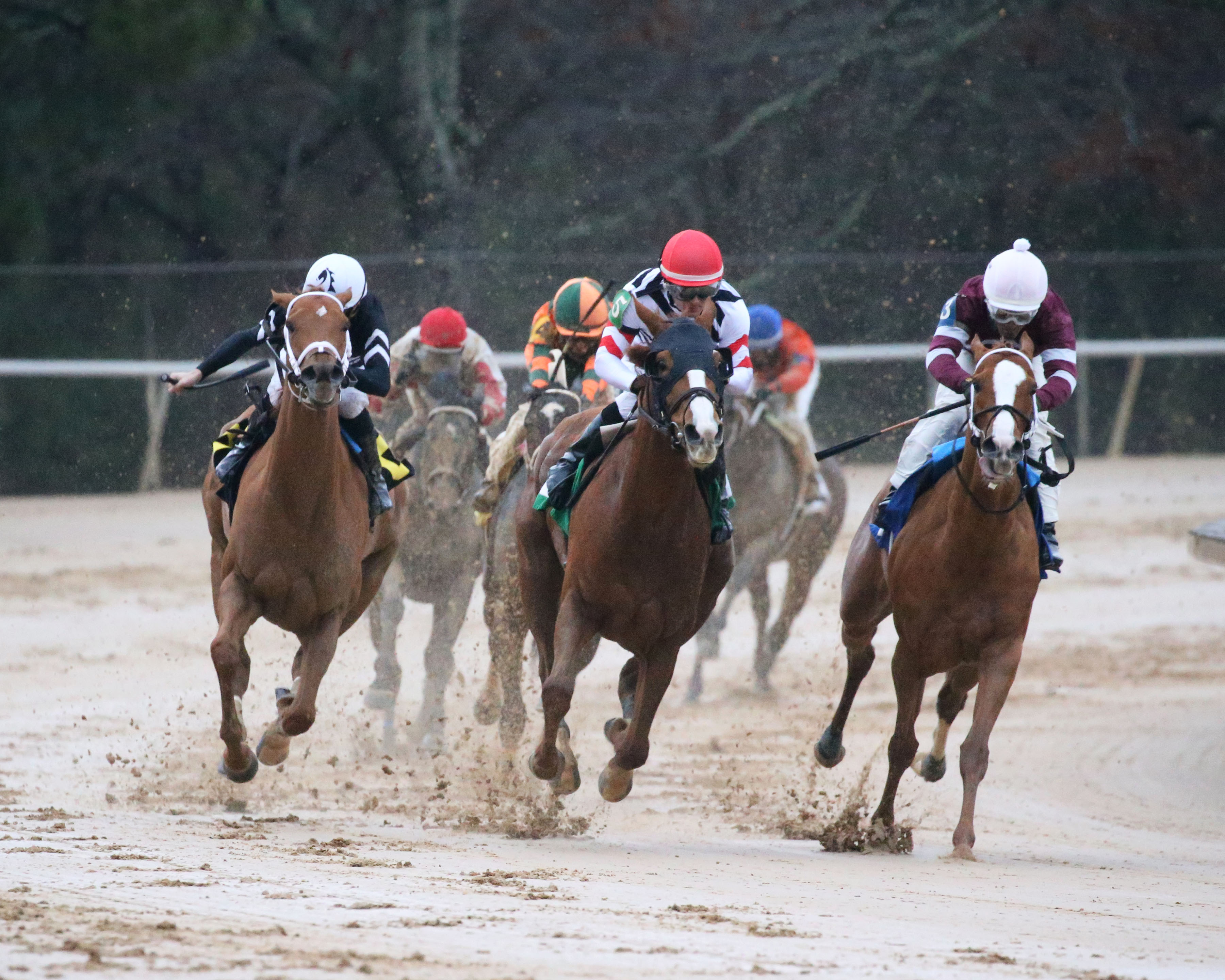 Winner’s circle photos for Got Stormy are now available on the track photographer’s website. 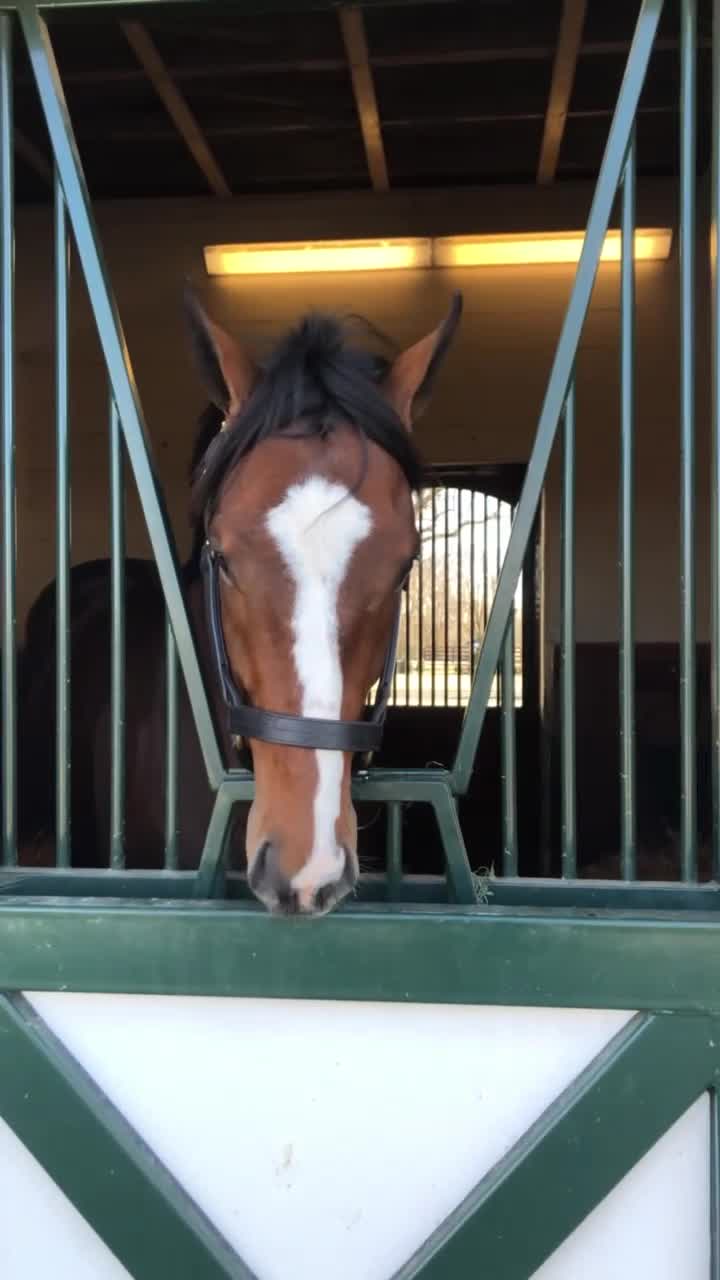 Make sure to tune in to see if Authentic adds to his accolades as a finalist for Horse of the Year and Champion 3-Year-Old Male. Additionally, both of Authentic’s performances in the Kentucky Derby and the Breeders’ Cup Classic have been nominated for the National Thoroughbred Racing Association’s Moment of the Year, which also will be announced during the Eclipse Awards broadcast.

The NTRA has created a digital program to celebrate the Eclipse Awards. To access the digital program and find all the information on finalists, categories, and more, click here. 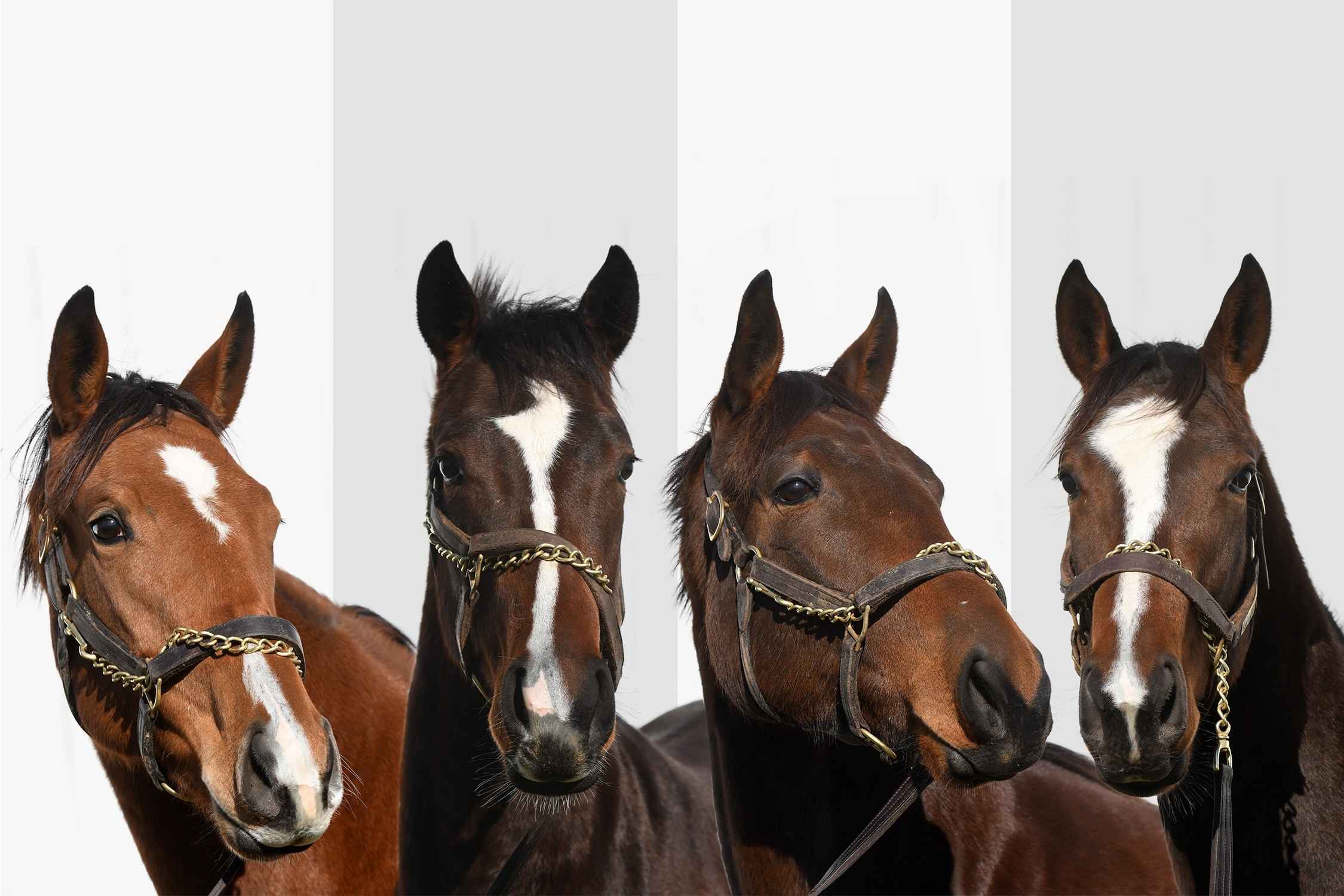 This is one of the most exciting offers we have ever assembled at MyRacehorse. Four beautifully bred fillies, four of the games best trainers with Bob Baffert, Todd Pletcher, Richard Mandella and Brad Cox. All for less than $200 a share.

Includes up to 2 million in bonuses!

The Filly Four bundle of 4 yearlings:

My Lady Lauren 18 (Sire: Into Mischief) 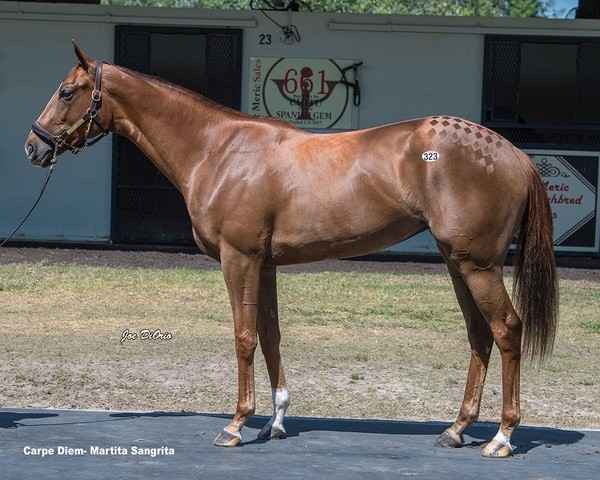 Purchased as hip #323 from the 2019 Spring Sale of Two-Year Old’s in Training at the Ocala Breeders Sale this filly by freshman sire Carpe Diem is a big two-turn looking filly that should offer a lot of versatility in Phil D’Amato’s Southern California program. The filly worked a quarter mile in 21.2 seconds, galloping out three furlongs in 33.1 and four furlongs in 47.4 seconds during the breeze show. During our physical inspections of her at the sale she didn’t turn a hair and was calm and cool as could be during our numerous visits to see her at the barn. She’s built like a true two turn horse that should offer plenty of options going long both on the dirt and turf.

The filly’s sire Carpe Diem, has been very well received by both breeders and buyers in his short time at stud. During last year’s Keeneland Yearling Sale the Carpe Diem yearlings were some of our staff’s favorite horses by younger stallions and they have not disappointed as they have matured as two -year old’s. Carpe Diem was campaigned by WinStar Farm and trained by Todd Pletcher. A winner of over $1.5 million in career earnings Carpe Diem was precocious as a two-year old winning the Grade 1 Breeder’s Futurity and at three won the Tampa Bay Derby and Toyota Blue Grass Stakes. Carpe Diem was sired by Giant’s Causeway, a perennial leading sire whose offspring excelled on both dirt and turf surfaces. The filly’s mare Martita Sangrita was very accomplished in her own right. A stakes winner of over $236,000 she is by Johar (2003 Breeder’s Cup Turf winner) and raced for 4 years before retiring to become a broodmare. Martita Sangrita has one other foal of racing age to date.

Trainer Phil D’Amato said this regarding the Carpe Diem filly “She has all the traits I like to see when looking at 2 year olds. She has the size, scope, and an athletic frame with all of the right angles. Better yet, she seems to have a great mind. Nothing at the sale phased her.”

With her combination of athleticism, physical makeup, smarts, and pedigree we are looking forward to getting this filly’s campaign started later this summer. She’ll get about a month of rest and relaxation after the sales process before heading to trainer Phil D’Amato’s barn in early-mid June. 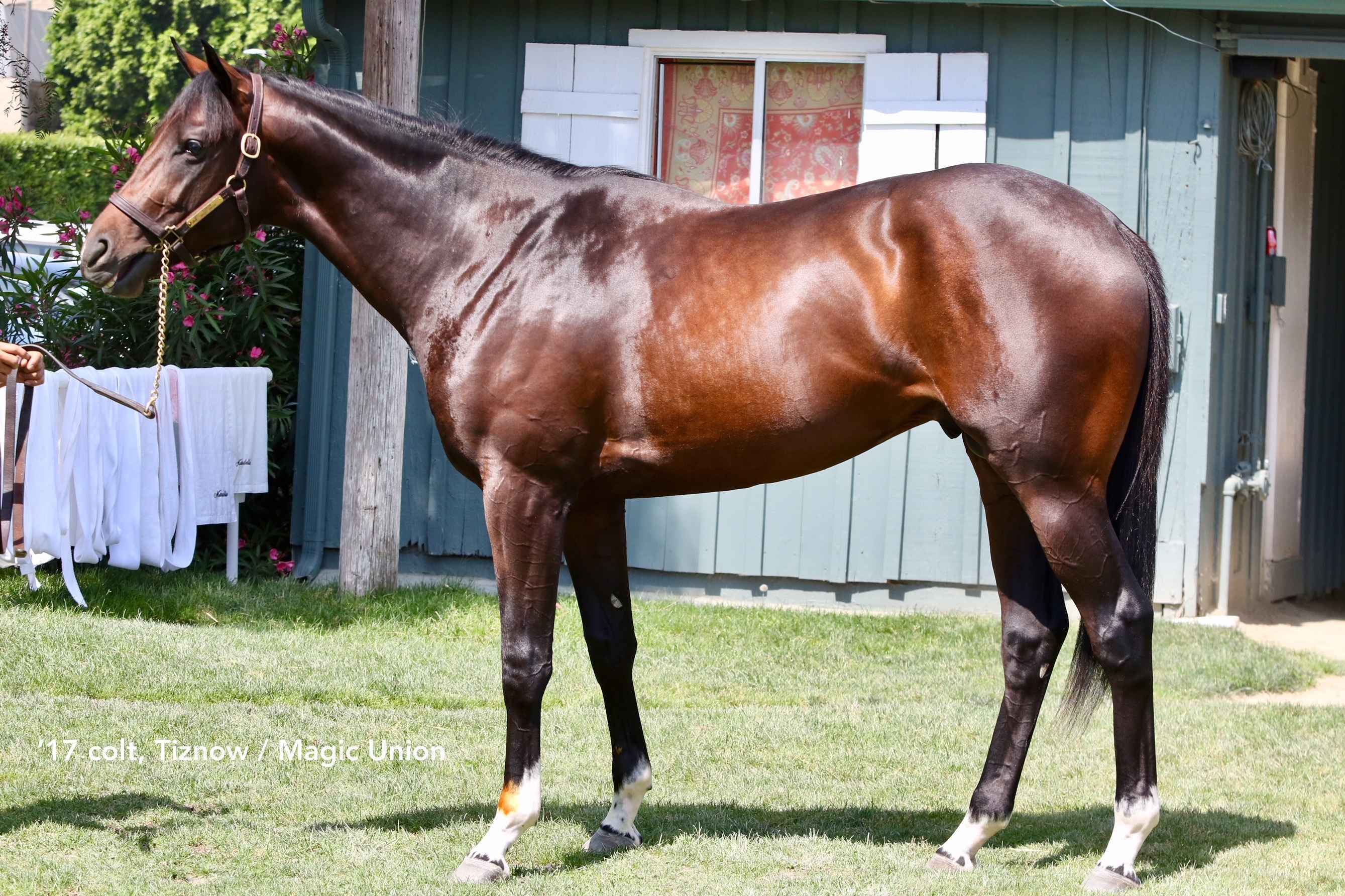 Industry leader Spendthrift Farm teams with MyRacehorse on a “Man Amongst Boys”; a beautiful bay colt by Tiznow ‘The Big Horse Sire’. To be trained by Hall of Fame trainer Richard Mandella.

We are beyond thrilled to begin our partnership with Spendthrift Farm with this striking bay colt by Tiznow. Led by B. Wayne Hughes, Spendthrift Farm revolutionized the breeding industry by introducing programs such as “Share the Upside” and “Breed Secure”. These successful innovative programs have now been copied in various forms leading to increased competition amongst farms in the breeding industry. One of the world’s leading sires today, Into Mischief, was a Share the Upside graduate. Starting for a very modest stud fee of $12,500 in 2009, Into Mischief’s stands today for $150,000. Speaking of Into Mischief, Spendthrift Farm also campaigned his half-sister, fan favorite and two-time Breeder’s Cup Distaff winner Beholder.

The colt, by leading sire Tiznow, was purchased out of the 2018 Fasig-Tipton Saratoga Sale of Select Yearlings for $150,000. He is a stout, scopey two-turn horse who really stands out amongst his peers. Our team saw him on the farm a few weeks ago during our trip to the Spring Ocala Breeders Sale of Two-Year-Old’s in training. We were super impressed with his presence both on and off the track. Compared to the 1,000 plus horses up the road in the sale he was one of the most complete packages in town (physical, mental, athleticism). He exudes a world of class about him. The colt was recently sent to the barn of Hall of Fame trainer Richard Mandella, a winner of nine Breeder’s Cup races and whose horses have included the likes of the great Beholder, Pleasantly Perfect, and the morning line favorite for the 2019 Kentucky Derby Omaha Beach. When Richard found out that MyRacehorse would be involved in the horse he said “I like this one a lot, I think we’re gonna have fun.” To boot, one of Richard’s exercise riders jogged by us the other morning and said “you’ll be hearing a lot more about this colt.” Unbeknownst to us the colt happened to be the Tiznow-Magic Union ’17 colt!

The colt’s sire Tiznow, of course was the back-to-back Breeder’s Cup Classic champion of 2000-2001 and earner of over $6.4 million in career earnings. Retired to stud to WinStar Farm after his four-year-old campaign he’s been one of America’s leading stallions for two decades. He’s sired the likes of Dubai World Cup winner Well Armed (gelding), Breeder’s Cup Mile winner Tourist, Santa Anita Derby and Travers winner Colonel John, Tizway, Morning Line, Gemologist, and Strong Mandate, all who are now stallions themselves. There’s a reason they call him ‘The Big Horse Sire.’

On the bottom side the colt’s dam, Magic Union, was a Grade 2 stakes placed filly who earned over $217,000 in career earnings. She is by Dixie Union, also a sire of sires including the likes of stallions such as Belmont Stakes winner Union Rags and Overanalyze. If that wasn’t enough Dixie Union has also had success as a Broodmare sire of stallions including the likes of New Year’s Day, Unified, Mohaymen, and Klimt. We’d love to add this colt to that list.

The colt is doing very well in Richard’s program since being shipped west and will be targeting at start at Del Mar this summer.