Trainer Tom Amoss is looking at a two-turn allowance race at Indiana Grand on June 8th for Sixtythreecaliber. Given that she is a light filly, Tom likes the time in between races so she doesn’t lose too much weight. Entries will be taken on June 2nd.

Sun Valley Road continues to gallop at Keeneland and is doing well. Here she is getting her legs wrapped after training. Wrapping legs is done to keep legs cold and tight after exercise. This is a standard protocol with equine athletes as a preventative towards any swelling and/or to reduce swelling.

We will have a more in-depth update on her progress later this week.

Boppy is getting ready to head to the main track for a 3-furlong work at 9:00 AM!

While Salute to America has returned to the track to train following his latest race, trainer Tom Morley reported our 3-year-old son by American Freedom is beginning to move a bit uncomfortably behind while galloping. While the colt checks out fine physically, Tom has suggested the proactive measure of gelding him, because that often helps with improving hind-end movement. Rather than waiting and possibly seeing this issue develop further, Tom and our racing management team think gelding now will truly benefit Salute to America because, if ignored, this is something that could negatively affect him during his breezes and races, and we want to maximize his performances as a racehorse and continue to build on the confidence we saw from him when he broke his maiden two starts back.

Additionally, Tom explained that Salute to America has reached a level of maturity where gelding him will not affect his testosterone levels negatively. It is unlikely that Salute to America would develop into a desirable sire prospect, which typically is something only the highest level of graded stakes winners achieve, therefore he would need to be gelded at some point in the future, when it’s time for him to have a second career off the racetrack. With six weeks until his next possible race — we are waiting for the next Belmont condition book to be released for an exact target — now is the perfect time for him to be gelded. Salute to America is currently scheduled to be gelded Monday morning and we will follow up as he recovers.

Always Hopeful is scheduled to breeze over the Keeneland main track tomorrow at 9:00 AM.

Lookwhogotlucky showed some real determination today at Lone Star Park to break his maiden for trainer Steve Asmussen. When it looked like our 3-year-old colt, who had the lead in the stretch, was going to be passed, he dug in and gamely held sway for a nose victory as the 4-5 favorite favorite in the field of five.

He was not claimed out of the race.

Ridden by Rodolfo Guerra, Lookwhogotlucky broke well and then settled in the second spot behind pacesetter Russet Moon into the first turn and down the backstretch. He was about one length off Russet Moon through pedestrian early fractions of 24.01 seconds and 48.38 in the one-mile dirt race.

Set down by Guerra leaving the turn, Lookwhogotlucky had the lead at the top of the stretch, but True Dakotan was coming with a nice rally and took the lead briefly in deep stretch, but our colt re-engaged and battled back for the victory.

To order a winner’s circle photo, please contact Dustin Orona Photography at either (972) 237-4850 or dustinorona@me.com.

Once we have the race replay, we will share with you in an update.

Lookwhogotlucky broke his maiden in gritty fashion just moments ago at Lone Star Park. It was a nail-biter, but our colt had his nose in front at the wire. 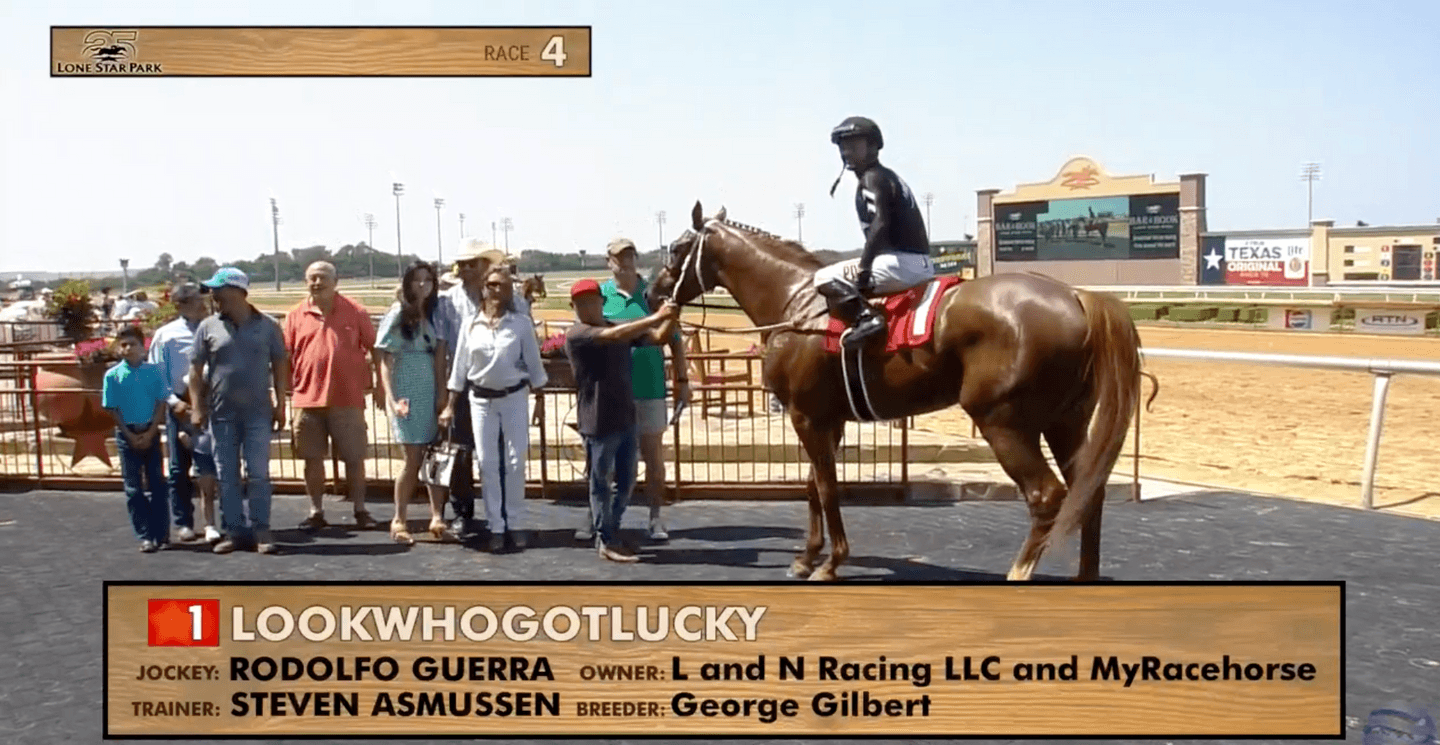 Carpe Vinum breezed five furlongs in 1:04.20 this morning while working in company over the training track. Similar to last week, our mare set the pace in the work along the inside and finished up with plenty left, galloping out nicely.

As the mare exited the track under jockey Abel Cedillo, he told our West Coast Racing Manager, Joe Moran, “Really good. She is going to run huge next time.”

We will target the Grade 3 Santa Barbara (nominations above) on May 14th as trainer Phil D’Amato is expecting a short field and continues to report our mare couldn’t be doing any better. 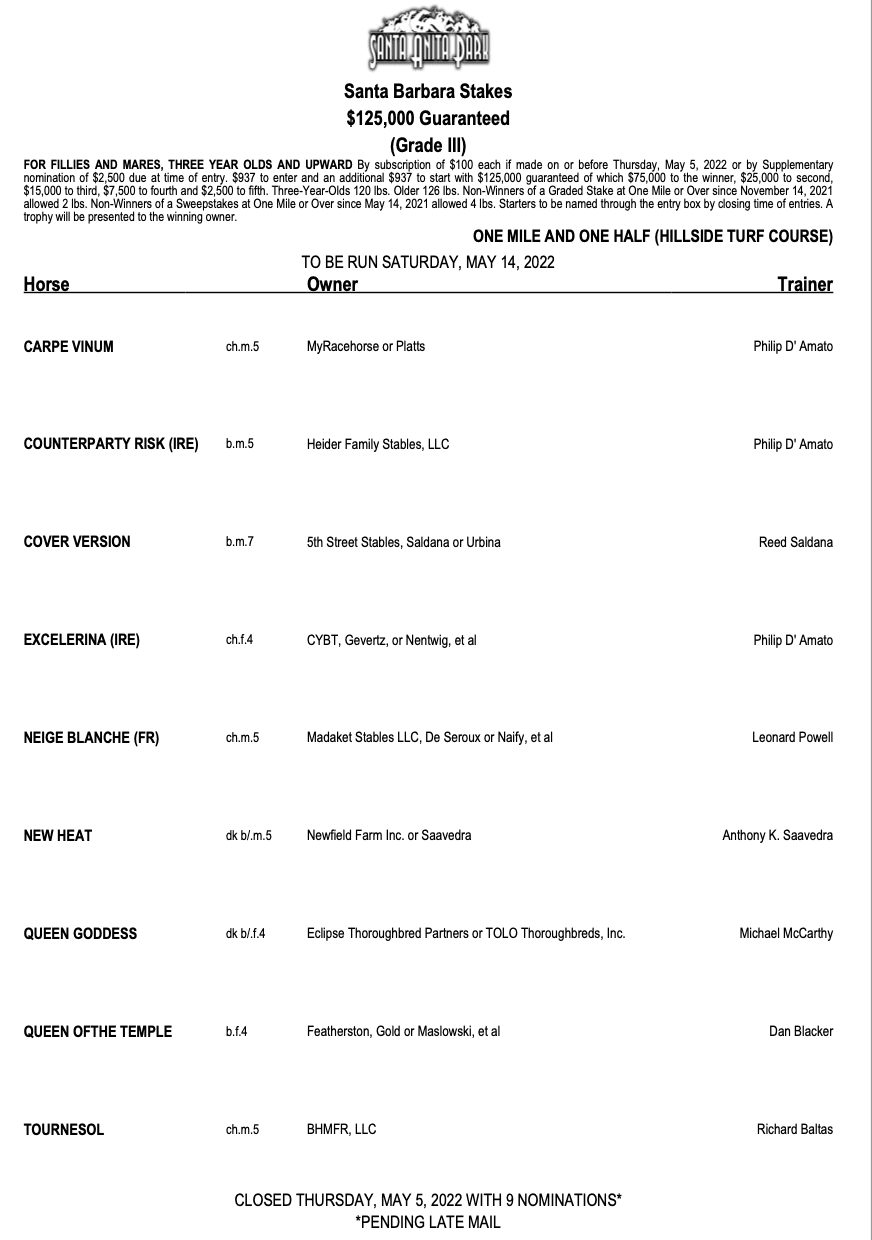 Going to Vegas breezed a half-mile in 48.00 seconds this morning over the Santa Anita training track. The 5-year-old mare worked on the outside of stablemate Tournesol, and was always traveling the strongest of the two.

Jockey Mario Guiterrez, who was aboard Going to Vegas this morning, had to keep a strong hold as the duo hit the top of the stretch as Vegas was full of run. With three weeks still to go for the Grade 1 Gamely, trainer Richard Baltas did not want the mare to do more than this today, and this latest work indicates she is plenty fit and ready to go.

Straight No Chaser was back on the work tab yesterday morning, breezing three furlongs in 37.20 at Santa Anita Park.

Trainer Dan Blacker was pleased with this first breeze, reporting, “He was moving well and in hand throughout, looking good.”

Straight No Chaser looked great this morning out of the work according to Dan and pending all continues well, he will remain on a weekly workout schedule moving forward.