Mac ‘N’ Cheese has been nominated for the 1600m Group 2 Queen Of The South Stakes this Saturday at Morphettville.

The current plan is undecided and she is a 50/50 chance based on her recovery over the next couple of days. She appears to have pulled up well after having a fairly easy time at the back of the field in the Australasian Oaks on Saturday, however Tony McEvoy will be monitoring her closely in the lead-up to acceptances. The stable will always take Mac ‘N’ Cheese’s long-term wellbeing into account when making any decisions.

We will be in touch with another update in the coming days. 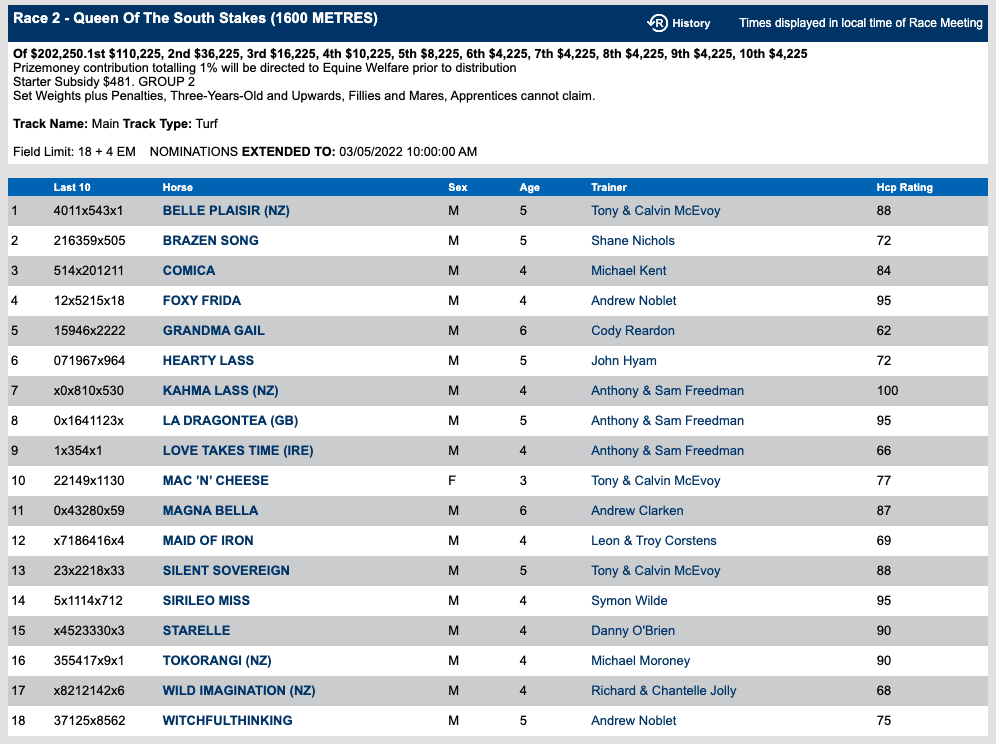 A fantastic Australian trial debut from The Milkybar Kid this morning, winning Trial 8 over 1045m at Randwick by 1.5 lengths.

You can watch the replay above – he is in the red MyRacehorse silks.

We are thrilled with how he performed today. There is a long way to go but we must be happy as he ticks off each step of his preparation, including how he handled the heavy ground. He showed the same early speed which we saw in his NZ trials and Tim Clark used it to good effect to take up a handy spot. He was able to kick around the bend and put away his rivals in fairly easy fashion. You can already see the hallmarks of the Waterhouse & Bott method starting to shine through.

There was some reasonable opposition too despite only being a 3yo maiden trial, with many of the horses having already had a trial under their belt. 3rd place getter CARARTIE has placed 6 times from 9 runs, including at metro level, and amassed over $50k in prizemoney. She was last seen running 5th by 1.3L in the $250k Magic Millions Maiden over 1200m at the Gold Coast on January 15.

Overall, he still has a fair way to go but it is nice to see him hit the ground running as he will only improve from here.

We will be in touch with the stable’s update on how the horse has pulled up and what the plan is from here.

Syncretism had a really nice trial at Randwick today, finishing 4th by 1.27L over 1045m in Trial 5.

You can watch the replay above. Also attached above are Trainer Mark Newnham and Jockey Josh Parr’s thoughts.

Overall, she did a great job stepping out to 1045m (300m further than her first trial) and did everything asked of her. As Josh Parr referenced, she may not have loved the heavy ground yet still pinged the gates, showed nice speed to lead and kept sticking on despite the testing surface. We will see how she pulls up and Mark will make a call as to where we head next.

Exciting times ahead for this filly!

Very excited to confirm that Deep Point has accepted to race in Race 1 at Murray Bridge on Wednesday May 4. The race is to be run at 12:05pm local time (ACST) or 12:35pm Melb/Syd/Bris time (AEST).

We have an allocation of owner’s ticketing available, please enter here.

We will be drawing winners at 3pm TODAY so if you would like to attend, please enter ASAP and be ready to confirm your attendance between 3-4pm. We are still finalising exact numbers but we anticipate a good number of tickets from the race club. Note that Murray Bridge is approximately 1 hour’s drive from Adelaide.

We will be in touch with updates from the stable in the coming days. Good luck to all owners! 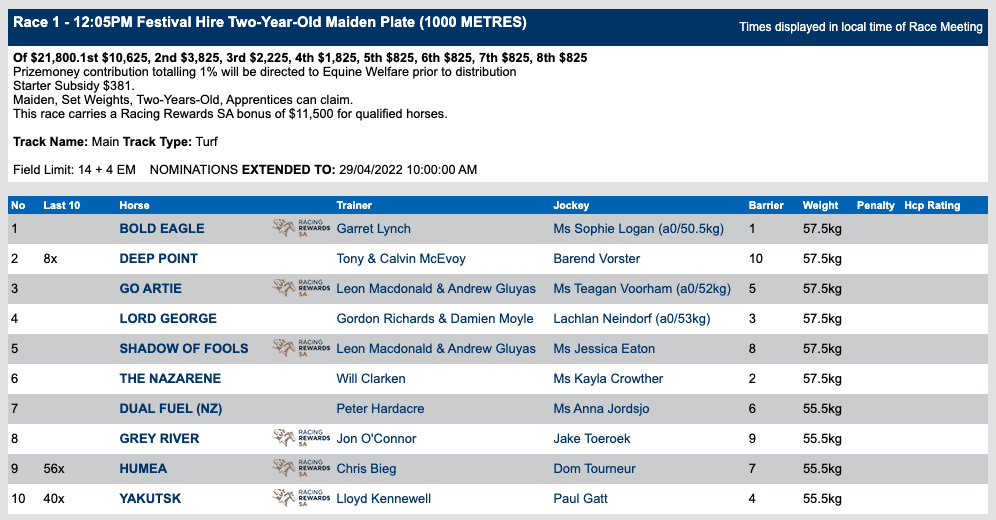 Syndicated enjoyed his first day at school in a very competitive maiden on the Newmarket Downs, where he learnt a lot under the hands of Rob Hornby.

He broke well out of the stalls but found himself keen on the front end due to the slow pace being set. After tackling the dip at Newmarket, he stayed on nicely towards the line, but it was too late as Miami Girl kicked clear.

Enjoy the video, especially the part when Rob Hornby states, “he is going to be a nice one going forward”!

We will update you when we hear how the colt has come out of his race.

Chasing Time returned to the work tab this morning at Belmont Park, working a half-mile in 51.60 seconds on the training track. A slower time was expected for his first work back.

We will be in touch with trainer Steve Asmussen in the coming days about his thoughts on Chasing Time’s next start. As previously reported, the six-furlong Gold Fever Stakes at Belmont Park on May 15th and the Grade 3 Chick Lang Stakes at Pimlico on May 21st, also run at six furlongs on the Preakness undercard, are under consideration for the colt’s next start.

Lookwhogotlucky worked a half-mile at Louisiana Downs this morning in 51.40 seconds. Additionally, Lookwhogotlucky has been entered in a one mile, $7,500 maiden claiming at Lone Star Park on May 8th. He drew the rail out of six horses entered and jockey Rodolfo Guerra will be aboard. The fourth race will go off at approximately 2:59 p.m. CT. 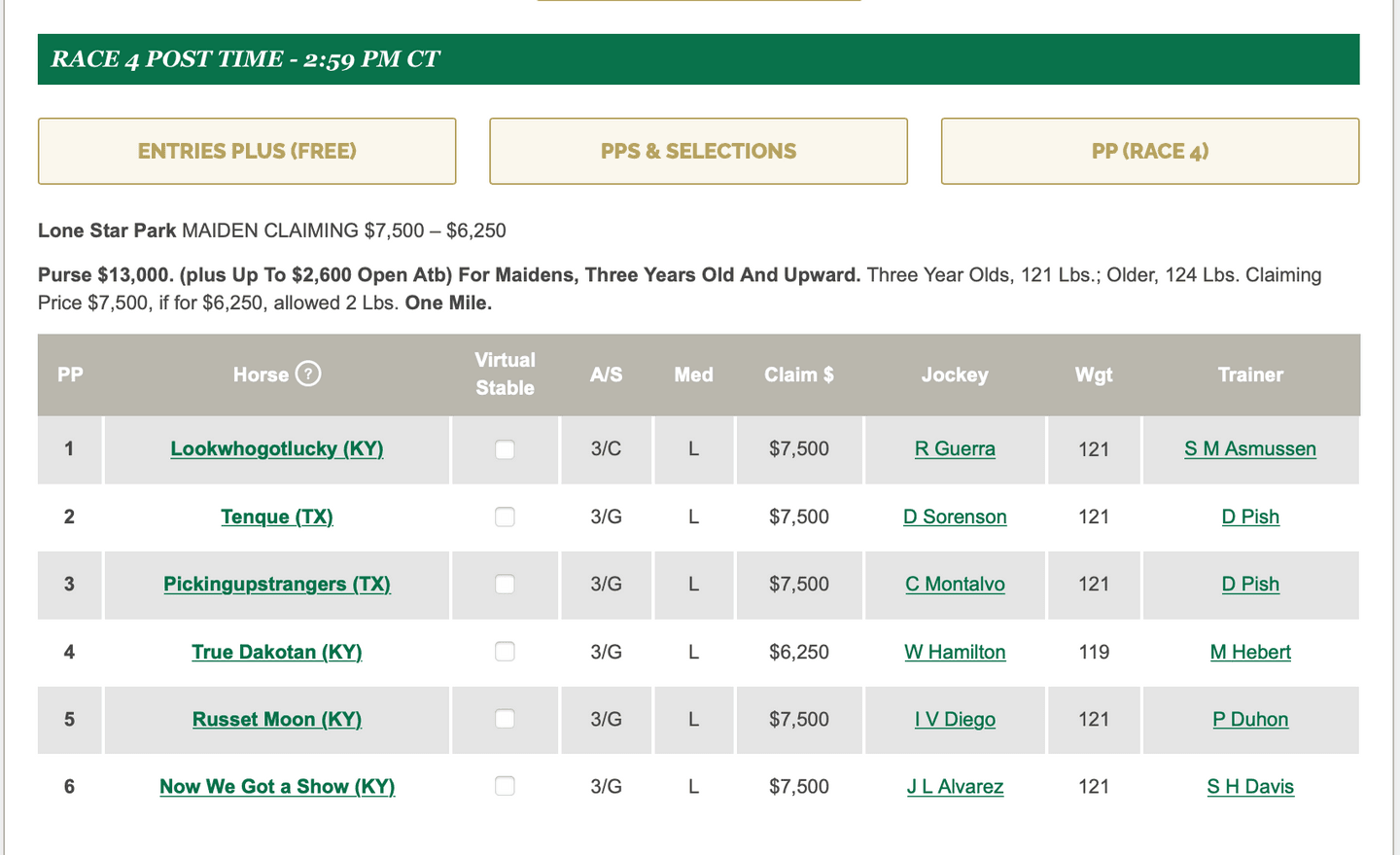 Enjoy these training scenes of Three Jewels from our recent trip to King’s Equine. Our 2-year-old son of American Pharoah looks a lot like his father whose anniversary of winning the 2015 Kentucky Derby is tomorrow!

Enjoy these training scenes of Rosie’s Alibi from our recent visit to King’s Equine. Our 2-year-old daughter of Justify is looking terrific!

Regal Rebel worked her first half-mile this morning since returning to the work tab. She covered the distance in an easy 51.94 seconds over Belmont Park’s main track.

This week will speak with trainer Rob Atras to see how the New York-bred filly is progressing as she continues preparations for her comeback to the races.