Hero Status had his first breeze on Saturday morning since his third-place finish on debut. The 3-year-old son of Flatter earned the bullet, as his 46.60 second half-mile was the fastest of 76 workers at the distance.

Hero Status breezed by himself but did have an equipment change, adding “cheater” blinkers. Cheater blinkers block a very small amount of vision and are believed to have a greater psychological effect, focusing horses on the task ahead.

Hall of Fame jockey Mike Smith came out to work Hero Status and reported he was really on the engine from the get go with the addition of blinkers. “He just wanted to go down the backside when we broke off, but I was able to bring him back to me and he finished with plenty,” said Smith.

The work video can be seen above. XBTV also captured the work and will have it posted on their website sometime tomorrow.

Always Hopeful is scheduled to breeze tomorrow morning on the main track at Keeneland at 9:00 am.

Tizamagician was back on the work tab this morning, breezing three-furlongs in 37.20 seconds over the Santa Anita main track. The 5-year-old son of Tiznow couldn’t have looked happier as he stretched his legs down the Santa Anita stretch.

Team Mandella is thrilled with his overall status and pending all continues well, Tizamagician should remain on a weekly work routine.

After speaking with trainer Phil D’Amato and reviewing the Grade 3 Wilshire Stakes field, he is inclined to run Carpe Vinum in tomorrow’s race at Santa Anita. From a Ragozin and Thoro-Graph speed figure perspective, Carpe Vinum is very competitive in this field, but she would have to run a career best to be on the winning end of things. On Thoro-Graph, she has been very consistent, running 7s in four of her last six efforts, and has a 44% chance to match this career-best figure. On Ragozin, the mare ran a career top last time, earning a 10 or 10 1/2. While D’Amato believes she couldn’t be doing much better both physically and mentally, there is a natural fear of a regression number-wise, given the two-week turnaround in between starts and following a career-top number.

D’Amato would like to wait until tomorrow morning to make a final decision, allowing him to assess any scratches that may come, but as of this afternoon, Carpe Vinum is on schedule to run in tomorrow’s Wilshire Stakes. If there are any changes to this plan in the morning, we will follow up with an additional update.

Enjoy this video of Infinite Empire galloping this morning at Santa Anita.

Man Among Men returned to the track and galloped an easy mile this morning. Here are a few clips of him on the track.

Trainer Tom Morley shared with us his insight into Salute to America’s sixth-place finish today in his turf debut.

Salute to America ran an even race today to finish 6th at Belmont Park in his first race against winners and his initial start on the turf.

Ridden by Javier Castellano, Salute to America, who was 11-1 in the wagering, broke well on the dog-leg turn of the inner turf course race and then settled into seventh position on the outside of horses once the field reached the backstretch. Never more than several lengths off of the early leaders, Salute to America made a moderate move heading into the final turn to place himself in fifth position.

In the stretch of the 1 1/16-mile race, the 3-year-old ran evenly to finish nine lengths behind the winner, Saratoga Flash, in the nine-horse field.

Once we have feedback from trainer Tom Morley, we will share with our colt’s partners.

Storm Shooter has been entered in Race 2 at Belmont Park for Thursday, May 5th. Manny Franco has been named to ride from the rail in the six-horse field. The seven-furlong dirt race is a $40,000 claiming event with a purse of $45,000. Post time is 1:33 p.m. ET.

Stay tuned for our paddock lottery, which will be shared in a subsequent post. 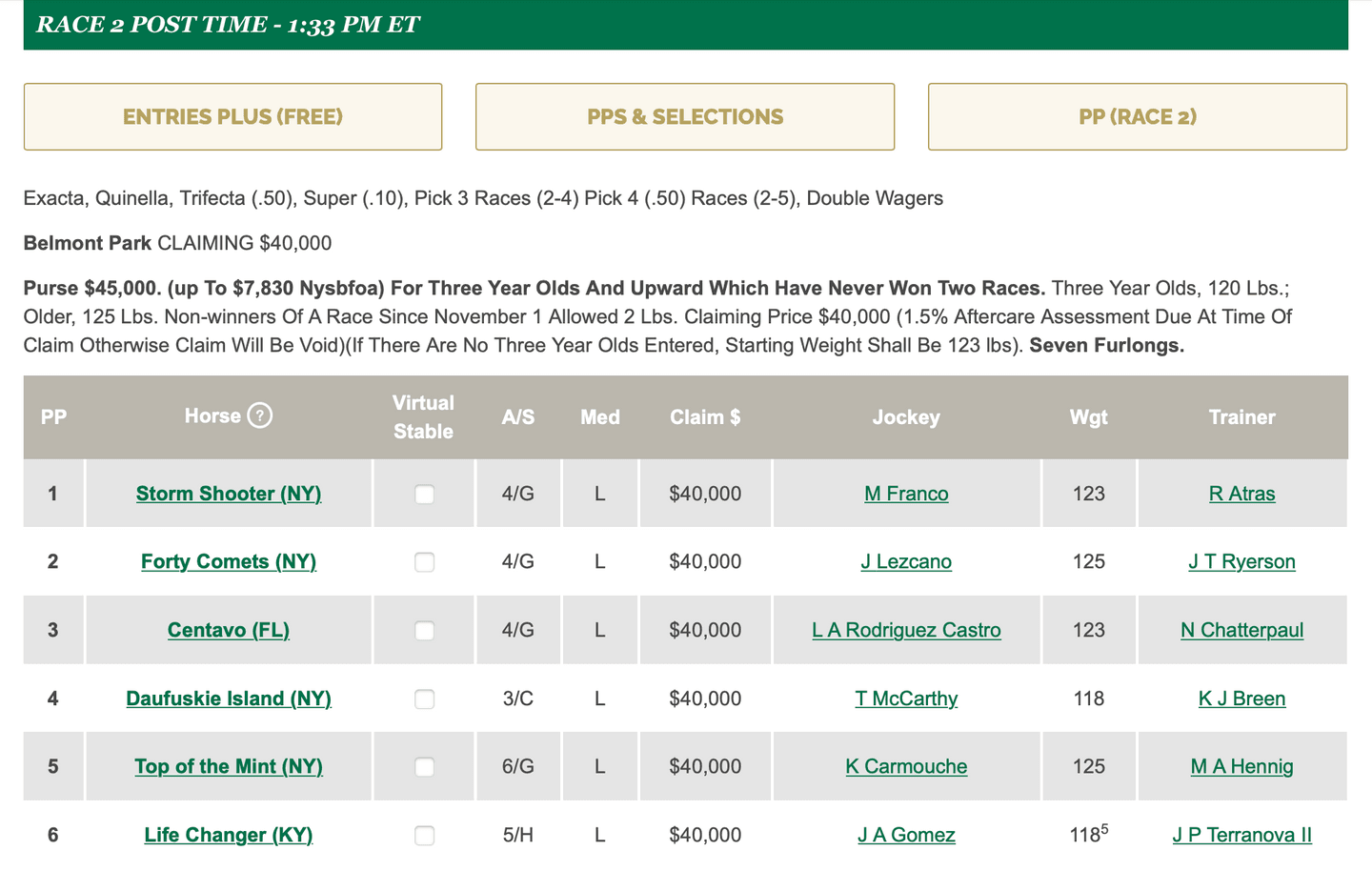 Salute to America is in the paddock for his upcoming race at Belmont Park. Good luck to his partners!