An update on your Filly, ROCK CHANT, has been provided by Trainer Bjorn Baker.

ROCK CHANT is looking great, and they are planning to enter it in a trial at Rosehill on Monday.

Find attached the update from Baker.

Always Hopeful is scheduled to breeze tomorrow. We will follow up with a workout report.

Please enjoy these photos of Got Stormy from this morning. She is usually pretty antisocial, but we may or may not have had some peppermints with us this morning! 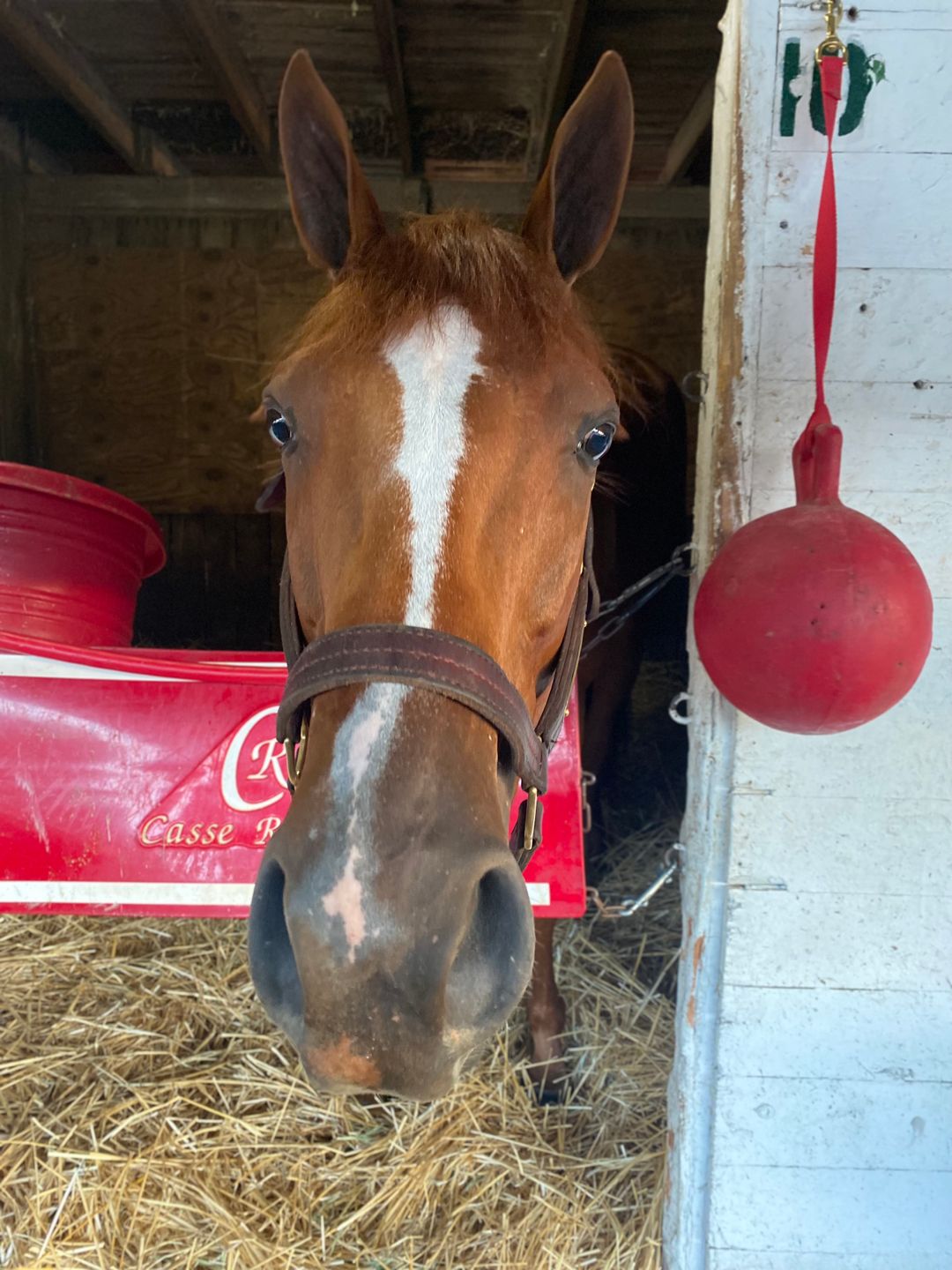 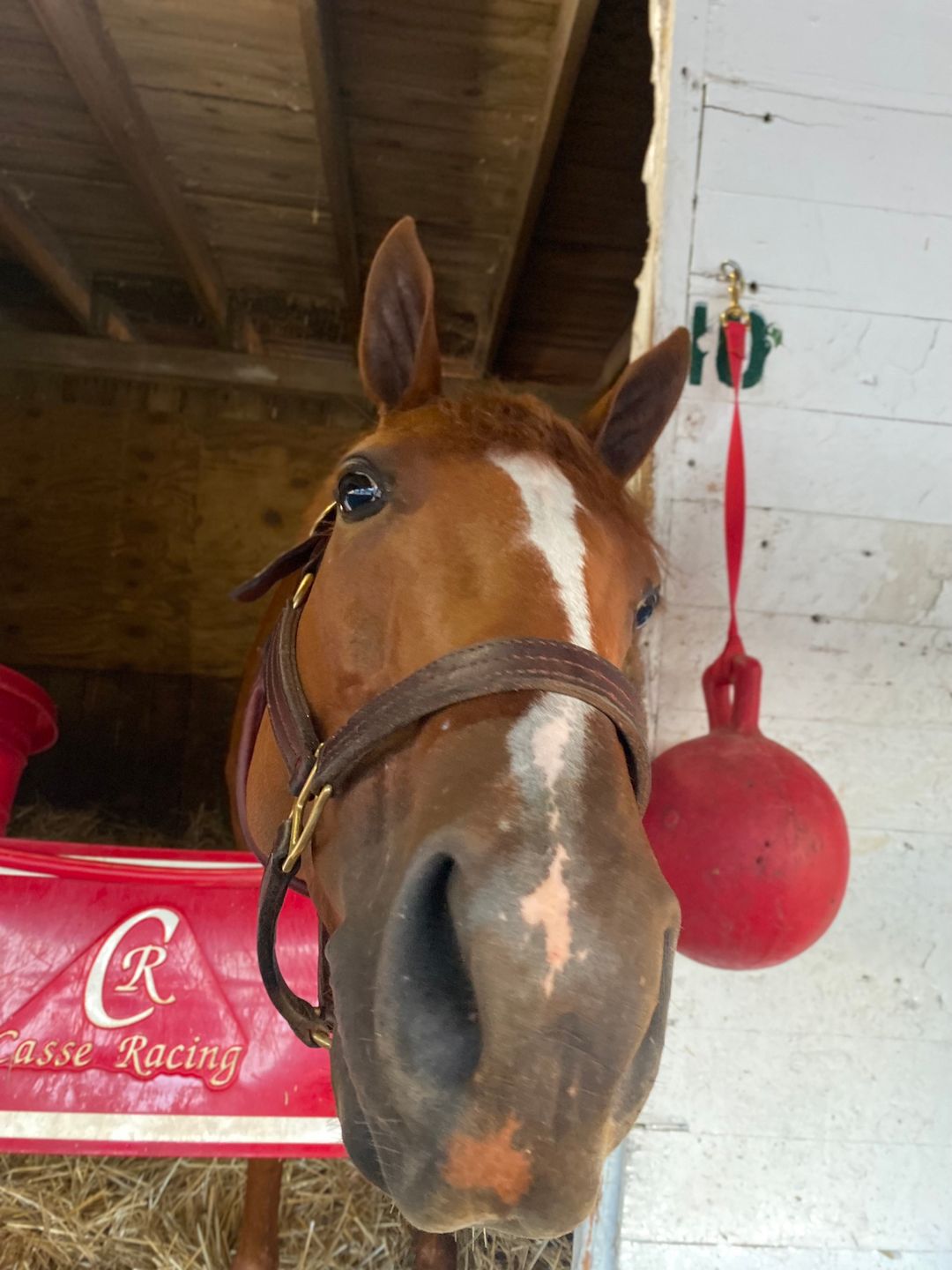 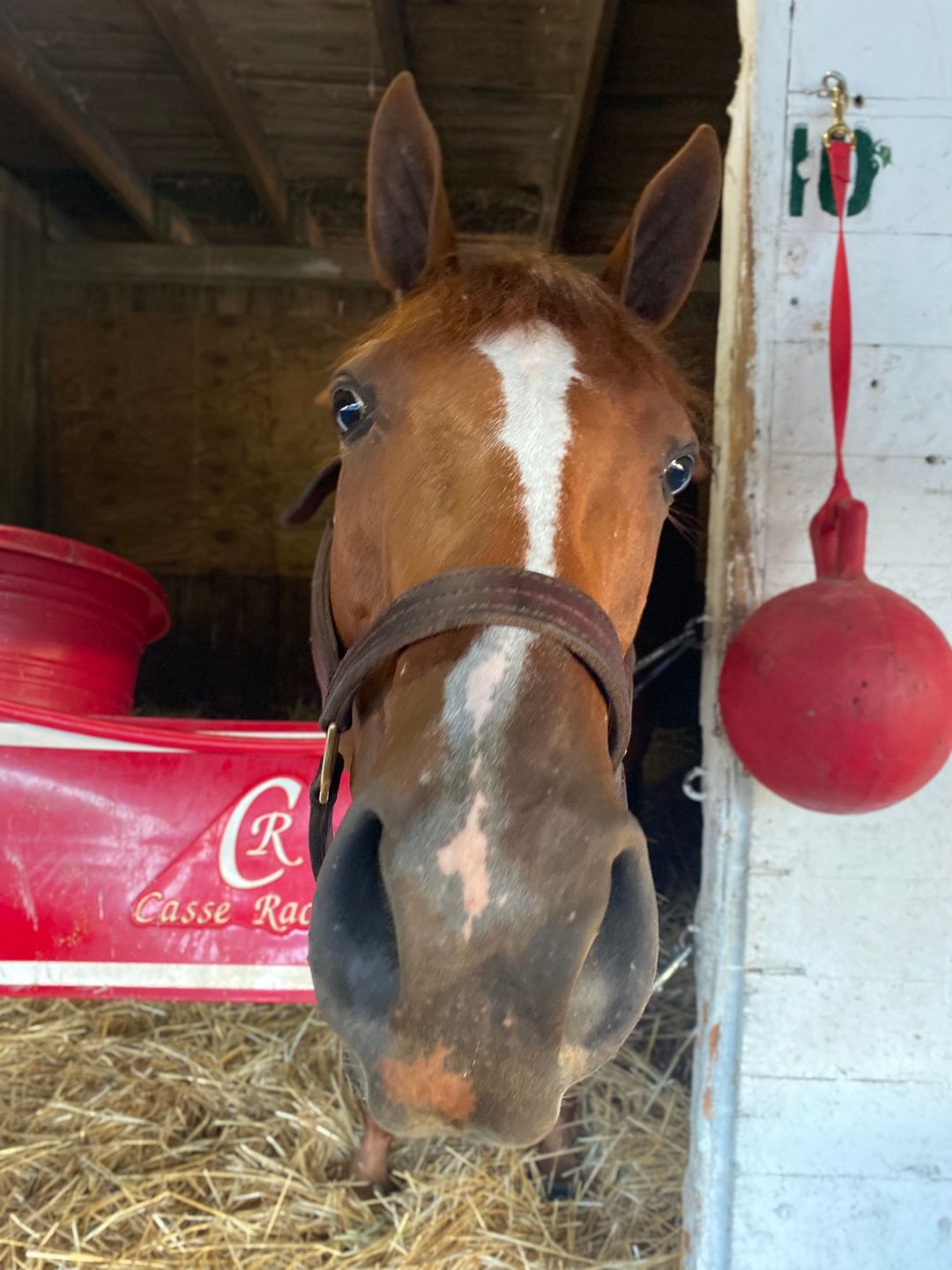 Joyful Addiction (inside) had her first breeze since moving to Al Stall Jr.’s barn at Churchill Downs. She worked in company with Anneau d’Oro, a 4-year-old colt that ran in the 2019 Breeders’ Cup Juvenile. Jockey Colby Hernandez was aboard Joyful Addiction, who covered a half mile in 48.80 seconds, ranking 11th out of 85 for the day.

Colby said that Joyful Addiction was “getting out” some, meaning she was leaning toward the outside in the work. He also mentioned that she may not have liked the muddy track conditions this morning. Al was a bit disappointed with today’s work and will be looking for an improved work next time. Please enjoy this video of Joyful Addiction’s breeze this morning.

Iron Works has continued his progression at trainer Todd Pletcher’s South Florida barn. He’s been galloping daily, schooled a few times at the starting gate, and is scheduled to resume breezing next week.

Lane Way continues to thrive, breezing four furlongs in 47 seconds flat at Del Mar this morning. This work earned the “bullet” for the day returning as the best of twenty-nine workers at the half-mile distance.

Following the work exercise rider, Austin Solis said, “He felt great today. I never asked him or ever needed to. My hands never moved on him.”

Team Mandella considered this to be very good work.

Enjoy this video and photo of Lane Way this morning. It is always a positive sign to see a horse eating following a work as you see Lane Way doing in the video above. 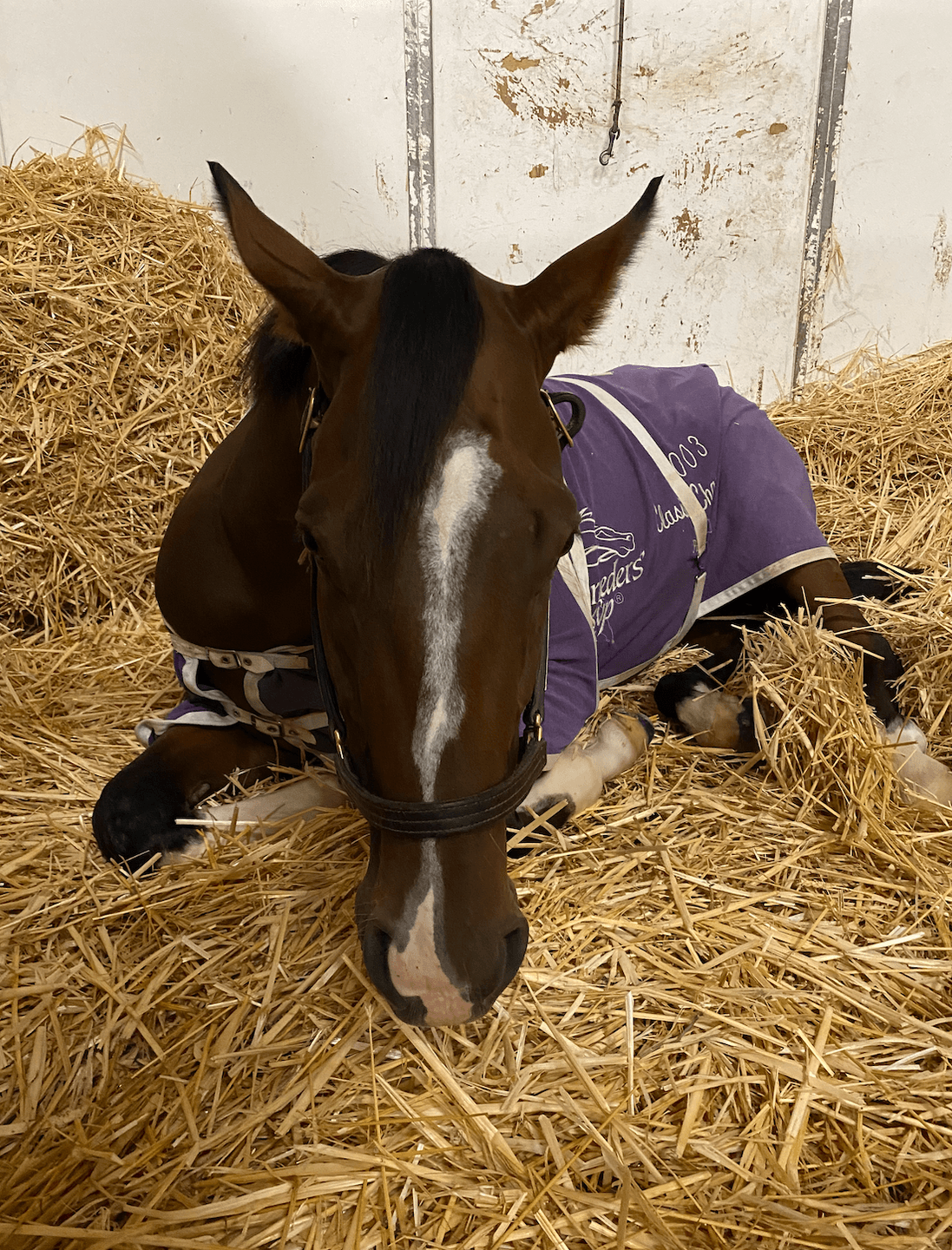 Your filly, EVERYTHING NICE, has accepted a run in the Group 3 Ottawa Stakes at Flemington on Thursday (Oaks Day). She will be out of barrier 7 with Damien Thornton onboard.

The Ottawa Stakes is a 1000m race for two year old’s run under set weights.

You can find the complete field attached or click here to view it on the Racing Australia website.

We’ve had several enquiries from owners with regards to accessing tickets to watch EVERYTHING NICE. Due to the nature of our big ownership group, we will be targeting opportunities, where we can get as many owners on course as possible and logistically the limited allocation of tickets due to Covid protocols is not an attractive proposition. MyRacehorse will not be running an official event for owners to attend.

Summary points of the announcement

Four tickets per horse are allocated to owners – due to limited capacity these will not be allocated to MyRacehorse. Now restrictions are easing will be exploring ways in future to get as many owners up close and personal to their horse.

70% of tickets allocated will be for Members. If you have a VRC membership and would like to attend the day, our recommendation would be to follow this link to the on-sale guide

The remaining 5% will be allocated to the General Public.

General Public tickets can be found here via Ticketek. 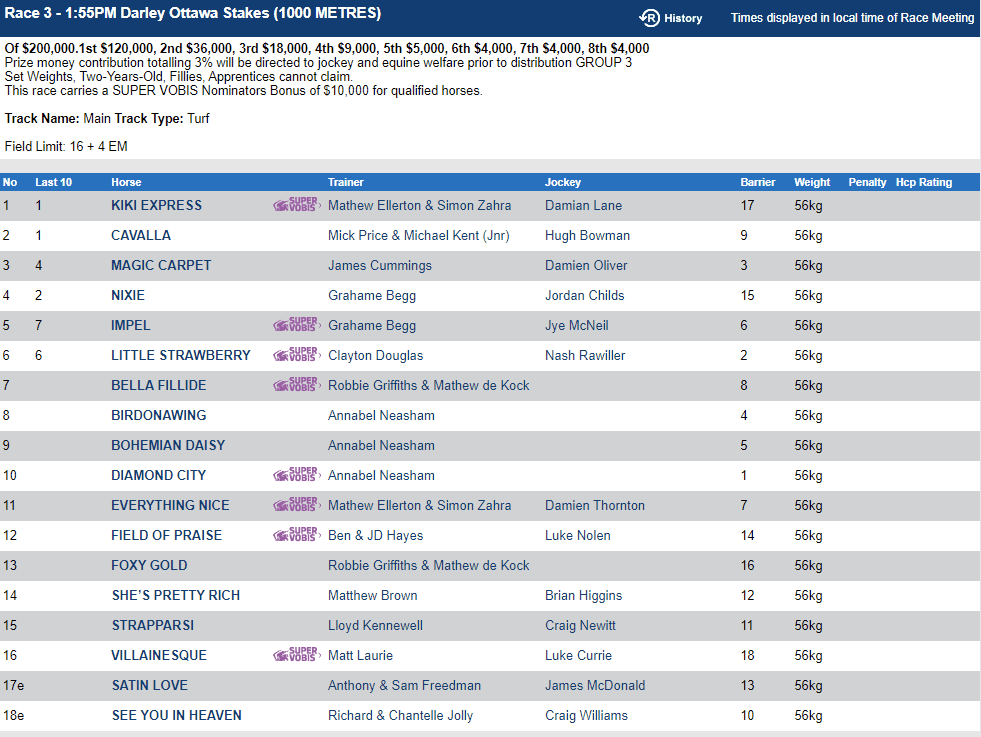 Collusion Illusion had his first breeze this morning since the Santa Anita Sprint Championship, breezing a half-mile in 50 seconds flat. While this work was on the easier side by intention, Trainer Mark Glatt was extremely pleased with how the 4-year-old colt traveled. Under exercise rider Jose Dominguez, Collusion Illusion worked under a strong hold throughout the stretch.

“He was engaged and into the work today,” said Glatt.

Now that Collusion has a work under him, he will begin to pick up the pace each week ahead. The ultimate goal as Glatt mentioned in his most recent voice memo is to get a classified allowance race written at the end of the Del Mar Fall meet.

Enjoy this photo of Collusion Illusion prior to his work courtesy of Zoe Metz.

Daddy’s Joy was back on the work tab this morning, breezing three furlongs in 39.55 seconds over the Gulfstream main track. A typical maintenance move for the 4-year-old filly by Daddy Long Legs being her first work back fifteen days removed from her most recent race.

Daddy’s Joy will likely return in a claiming non winners of three lifetime condition towards the middle of November.

Search Engine had more of a learning experience Sunday in finishing eighth of nine in his maiden special weight at Churchill Downs. Racing from post position 7, our 2-year-old son of Flatter was making his second start. He broke fifth, comfortably in the three-path, and stayed there in the first turn and along the backstretch.

Search Engine was passed by a pair of horses in the far turn and then checked slightly entering the lane. He tried for a bit longer, but by that time it appeared as if Search Engine had gone through enough. He finished more than 13 lengths behind the winner in the 1 1/16-mile race.

Trainer Tom Amoss said it was a disappointing effort, but he didn’t have many clues as to why. “Down the backside, James said he was fine as long as he had him in hand, but as soon as he opened up the reins, he really floundered over the racetrack,” Amoss said. Amoss did say the main track was deep and wet, despite its condition being labeled fast. “Really, left with more questions than answers, which is sometimes how it goes when they’re learning their lessons,” said Amoss, who noted the colt behaved well in the paddock and was focused entering the gate.

So it’s back to the drawing board for Search Engine. Amoss said the horse was cooling out fine, but that going forward, distance and surface are questions. “Wouldn’t be unusual for us to try the grass,” he said.

We caught up with jockey James Graham after the race. Hear what he had to say about Search Engine’s race today. We’ll check back to see how Search Engine exited the race.