An update from the spelling farm has been provided on your colt, Gotebo.

Gotebo is thriving in the paddock and the plan is for him to spend another two weeks here. He’s continued to grow and develop, and has appreciated getting some sun on his back. We couldn’t be happier with him.

Following his time in the paddock he will then be transferred to Mark Newnham’s pre-training facility, where he’ll spend roughly three weeks. During this time, we will be relatively patient with him, and the focus will be light work to build up his fitness levels along with some education. All going well at pre-training he will be brought into the stables approx mid November for a preparation.

He’s enjoyed a lengthy spell in the paddock, and we couldn’t be happier with his progress. We’re hopeful of getting some photos and/or videos of Gotebo across next week.

“I’m really loving what I’m seeing from this colt”.

The reference to his “name” is an indication that he feels he may be able to progress further this campaign based on what he’s seeing to date. Spendthrift are currently working with Racing Australia on finalising a name and we will update once this has been approved

A handful of shares are still remaining in this colt as we approach an exciting part of his racing career.

A number of the stallions from the Super Stable are represented in the early 2YO races tomorrow, including two of Australia’s first season sires – Merchant Navy and Churchill.

When looking through the fields in these 2YO races you will see a number of other Super Stable stallions represented as well; American Pharoah, Spirit of Boom, Impending, Lonhro, Capitalist, Written Tycoon, Rubick and Shalaa.

Above Suspicion breezed five furlongs in 1:00.80 this morning at Santa Anita. The 2-year-old filly was a touch disappointing as she couldn’t keep up with her company in this drill.

While there is nothing on the surface that seems to be bothering Above Suspicion, trainer Richard Mandella will monitor the filly out of the work and is considering sending her in for a nuclear scintigraphy (bone scan) to see if there are any underlying issues which could be causing this recent regression in her training.

Your Rubick x Whateverwhenever filly had an easy jumpout this morning at Flemington on the poly track surface.

Attached is a replay of her run (blue with orange sleeves), as well as a trainer and jockey post jumpout report.

We’re really happy with the jumpout, this prep is all about her education and she will derive a lot of benefit from the run. We will provide further updates as they come to hand

Here are the finalized financials from Vertical Threat’s win in the Russell Road Stakes at Charlestown. Notable expenses outside of the traditional race day expenses include significant transportation costs as a result of flying Vertical Threat across country from Los Angeles to Newark, NJ and back ($9,900 total, split 60% MRH and 40% Slam Dunk), vanning the horse from Del Mar to the airport, from Newark to Charlestown (and back), and back to Del Mar from Los Angeles, totaling $1,681.20 for MRH’s portion. Additionally, when a horse travels cross country it is customary to pay for the trainer or their representative’s travel costs to be there with and saddle the horse. In this case, Richard’s assistant accompanied the horse and those costs are listed as Trainer Race Day Expenses. 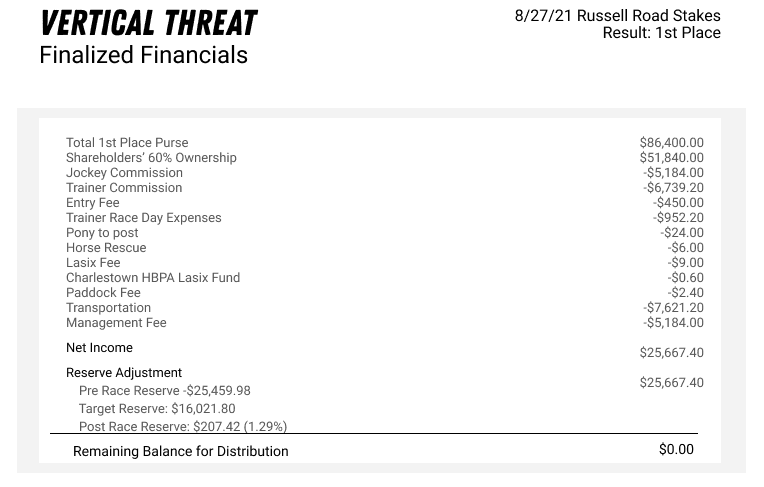 Come join us in the Santa Anita Premier Box Seats to cheer on our Stakes runners at Santa Anita this Saturday, October 2, 2021.

Relax in comfort in these premier box seats fitted with personal television monitors–broadcasting both onsite and offsite racing with a spectacular view of the racetrack and beautiful San Gabriel Mountains. You will enjoy witnessing all of the thrilling action as the horses race in front of you.

MyRacehorse owners have access to these premier seats as an owner’s perk to come out and root on Vertical Threat, Collusion Illusion, Tizamagician and Going To Vegas across the finish line!

Tickets are available NOW in a lottery-style of entry. We will conduct a random drawing for the free owner’s perk tickets on Friday evening, October 1st at 7 pm PST and you will be notified of the results and ticket details shortly after.

Here is the account information heading into Vertical Threat’s run in Saturday’s Grade 2 Santa Anita Sprint Championship. Total Purse is $200,000 with 60% to first, 20% to second, and 12% to third. In addition to the normal race day expenses (trainer, jockey, MRH commissions of 10% each, pony to post, etc.) there were nomination/starter/entry fees of $3,100 (MRH pays 60%, Slam Dunk Racing 40%).

After official race statements are provided by the track and account reconciliations are performed, any adjustments will be made (i.e. additional payouts) and a detailed breakdown of race day revenues and expenses provided.

Since Vertical Threat’s win in August’s Russell Road stakes the account changes have included actual August training costs, September training costs, vet costs (including preventative/maintenance therapy on his knees (from last year’s procedure)), and vanning between the local Southern California tracks the horse has been stabled at. 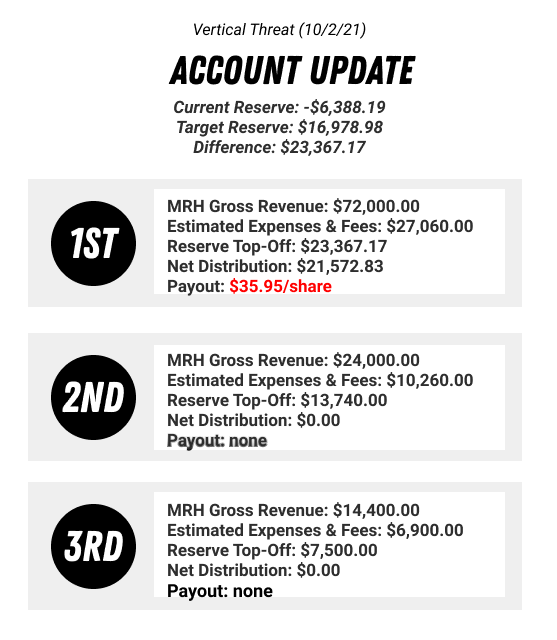 Winning also means Breeders’ Cup pre-entry and entry fees will be covered (a $30,000 value), a Travel Award up to $10,000 for domestic horses and $40,000 for international horses shipping into California to run in the Championships, and exclusive world-class treatment on racing’s biggest stage, including the best seats, hotel accommodations, executive car service, and invitations to exclusive events.

It also means you’ll have the opportunity to compete against the best in the world at the Breeders’ Cup World Championships on November 5 & 6 at Del Mar. And that means more than anything.

Thank you for taking part in a Breeders’ Cup Challenge Series race and best of luck!

Come join us in the Santa Anita Premier Box Seats to cheer on Forbidden Kingdom in the Speakeasy Stakes at Santa Anita this Friday, October 1, 2021.

Relax in comfort in these premier box seats fitted with personal television monitors–broadcasting both onsite and offsite racing with a spectacular view of the racetrack and beautiful San Gabriel Mountains. You will enjoy witnessing all of the thrilling action as the horses race in front of you.

Tickets are available NOW in a lottery-style of entry. We will conduct a random drawing for the free owner’s perk tickets on Thursday evening, September 30th at 7 pm PST and you will be notified of the results and ticket details shortly after.