We caught up with King’s Equine Farm Manager Raul Reyes at the Fasig Tipton Sale this week to check the status of American Heiress. Raul reports that American Heiress is a real classy filly that’s doing everything right, continuing solidly on her quarter mile breezes, and said he needs about another 4-5 weeks to work with her before she’s ready to be sent off to Todd Pletcher. We are coordinating with our photographer in the Ocala area to obtain footage of American Heiress next work and will share as soon as we receive it.

There were a few scratches for tomorrow’s race at Mountaineer allowing Kiana’s Love to draw into the race. She is schedule to line up in the starting gate and will break from the #10 post with jockey Luis Colon in the irons. As a reminder post time is approximately 4:44pm PST. 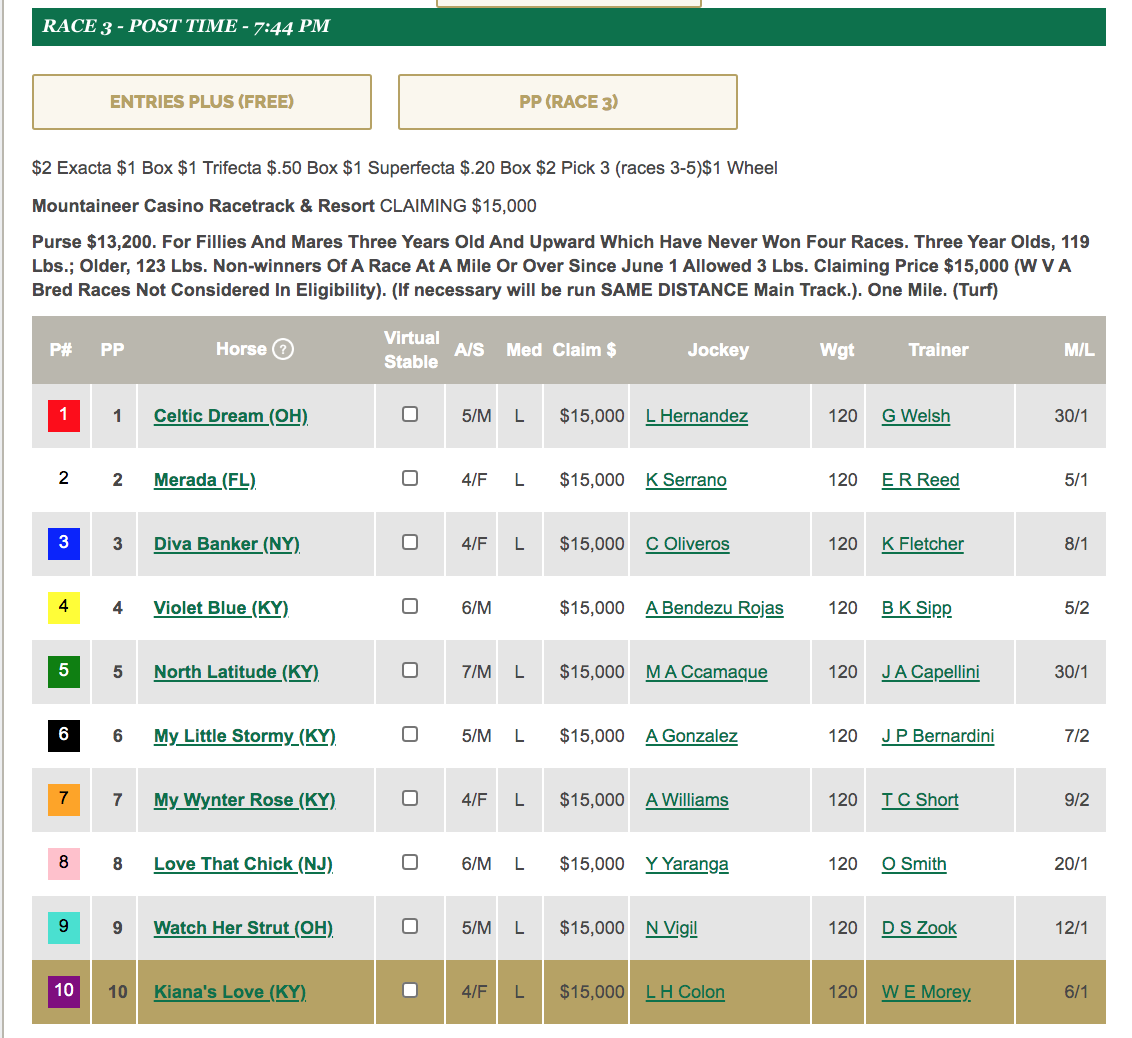 Vertical Threat received a well deserved 89 beyer speed figure for his breakout performance this past Saturday. He also got a 105 Equibase speed figure.

Vertical Threat has exited out of the race in good order to this point. He has returned to San Luis Rey, where he will train until his next start. Looking ahead at race possibilities, there is a first condition allowance race on August 2nd at Del Mar which will be the early target.

Wayne O is heading back to Churchill Downs tomorrow. He will return to training under Steve Asmussen.

Deep Cover is all set to ship out tomorrow morning from Winstar. He will be heading to Todd Pletcher’s barn at Belmont Race Track. Looks like good things to come in the near future for this handsome guy.

Big Mel had an easy half mile work this past Saturday at Los Alamitos, covering four furlongs in 49.2 seconds. This was a maintenance work, he is plenty fit and did not need to do anything more at this point. We spoke to Bob this afternoon, the next race for him hasn’t been decided quite yet. There are currently two potential options for Big Mel, a maiden special weight next Saturday (July 4th) at Los Alamitos going one mile and a maiden special weight going one mile on July 26th at Del Mar. We will follow up with an update on Wednesday.

Following Mo Mischief’s half-mile work in 50.80 on Saratoga’s Oklahoma training track on Sunday, trainer Todd Pletcher said on Monday the son of Into Mischief worked in company (outside) with a son of Constitution.

Pletcher, who typically works his horses in company, was pleased with the work and said Mo Mischief “went well in hand and should be about a month from a possible start.”

Lazy Daisy worked 5 furlongs in 1:00.80 over the Santa Anita main track this morning. We checked in with trainer Doug O’Neill, who reported she worked great! He was very happy with this move and thought she worked better this week than last week. The O’Neill barn is hoping to ship and be settled in at Del Mar this Friday, July 3rd.

In case you missed today’s MyRacehorse live show on “All Things Authentic”, you can still view it on YouTube. You will get to hear directly from trainer Bob Baffert, jockey Mike Smith, Spendthrift Farm General Manager Ned Toffey and MyRacehorse CEO Michael Behrens. Many frequently asked questions were covered regarding the racing, stallion and events process for Authentic.

Join us NOW as we discuss all things Authentic with a Hall of Fame lineup:

Topics to be discussed:
Bob Baffert discusses The Road to the Derby with Authentic
Mike Smith on recent workouts
Ned Toffey on the Stallion Process

We will answer FAQ’s about the Authentic offering at the end of the segment. Click here to be notified when we go live on Facebook and YouTube. We’ll see you there! 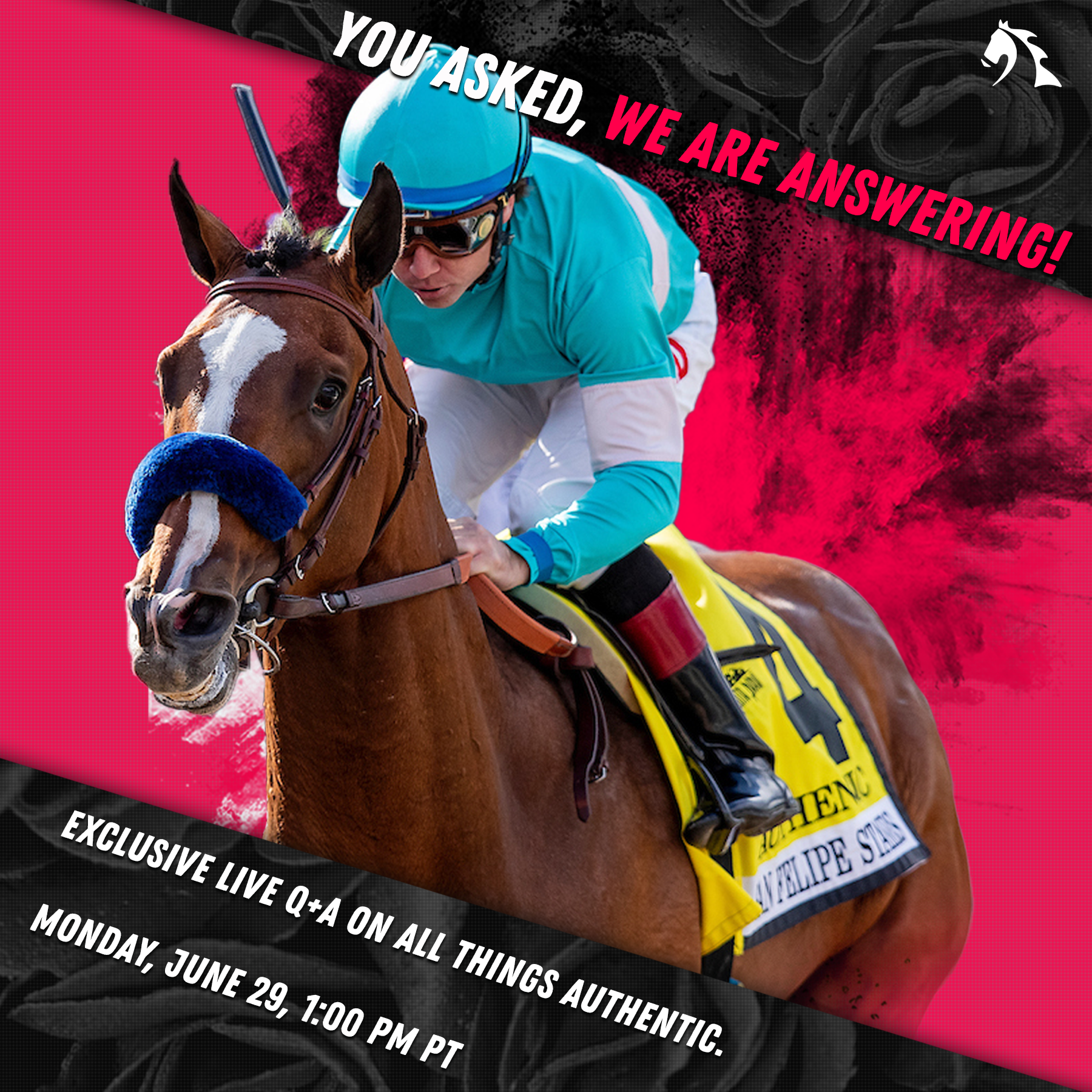