Winner! Winner! What a gutsy performance from Kiana’s Love, who took down the 2nd race at Mountaineer. Kiana’s Love broke alertly from the 8 post finding herself in a nice tracking position off the leaders. Turning for home, it was a two horse race between Kiana’s Love and #10 Hell’s a Poppin. The two put on a show down the stretch battling it out to the wire. Kiana’s Love came out victorious by a half of a length in the end. She was not claimed out of today’s race and will return back to trainer William Morey’s stable at the TTC. Congratulations to all owners, nice to see Kiana’s Love right back to her winning ways!

The current reserve was negative leading into the race, resulting in no instant payout issued. We will have the estimated race financials posted soon. 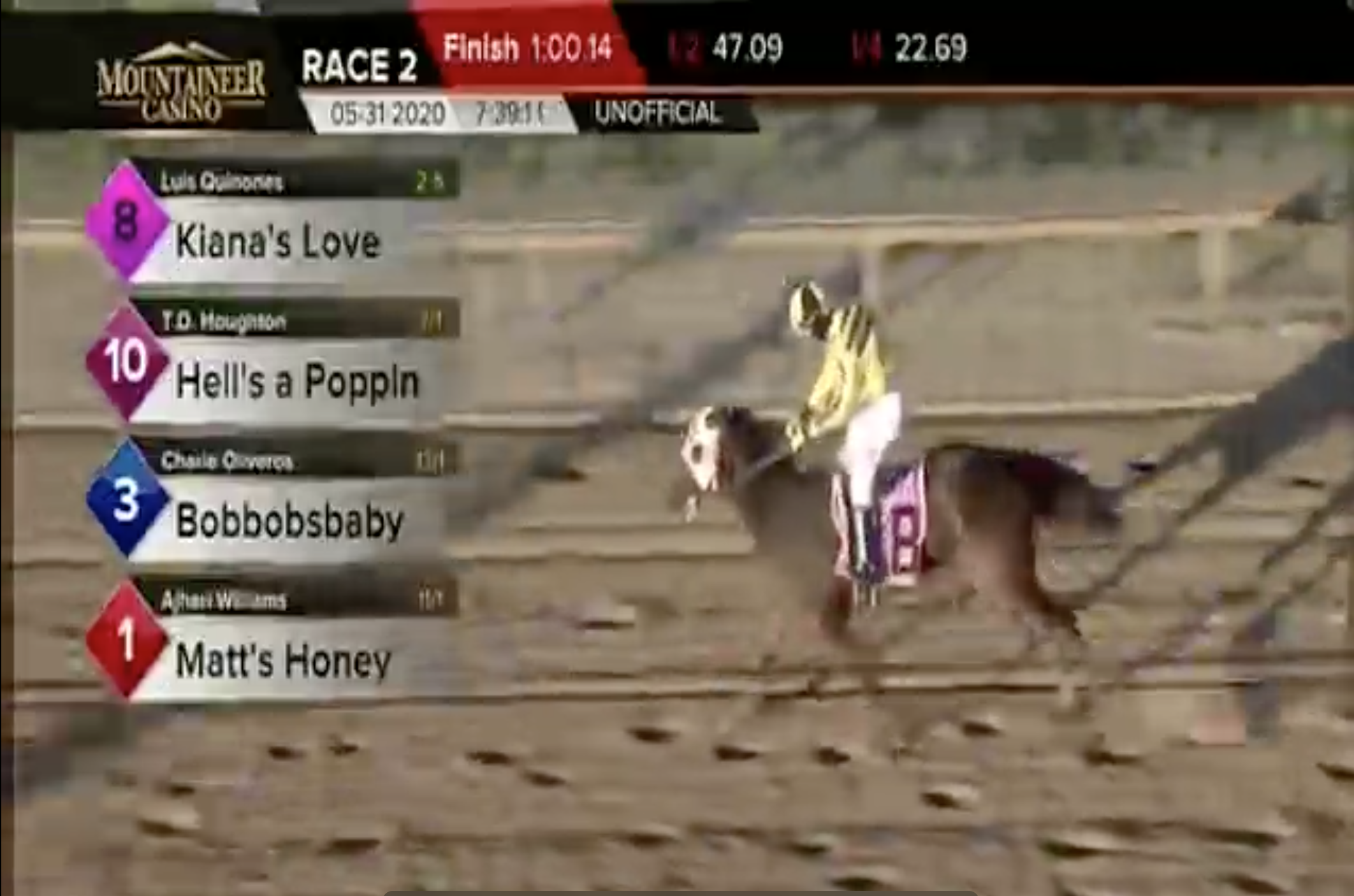 Big Mel worked 5 furlongs in 1:01.6 seconds this morning over the Los Alamitos main track. He worked by himself this morning doing it all on his own. After working a very sharp half mile last week, today was more of a maintenance work.

We will be touching base with trainer Bob Baffert in the coming days regarding race plans. Looking ahead at the final condition book (June 12-21), there was not an additional maiden special weight sprinting on the dirt written but there is a possible option next Sunday, June 7th (MSW 6.5F). It is also very likely there will be an option at Los Alamitos during their short meet (June 26th – July 5th) prior to Del Mar. More updates to come. 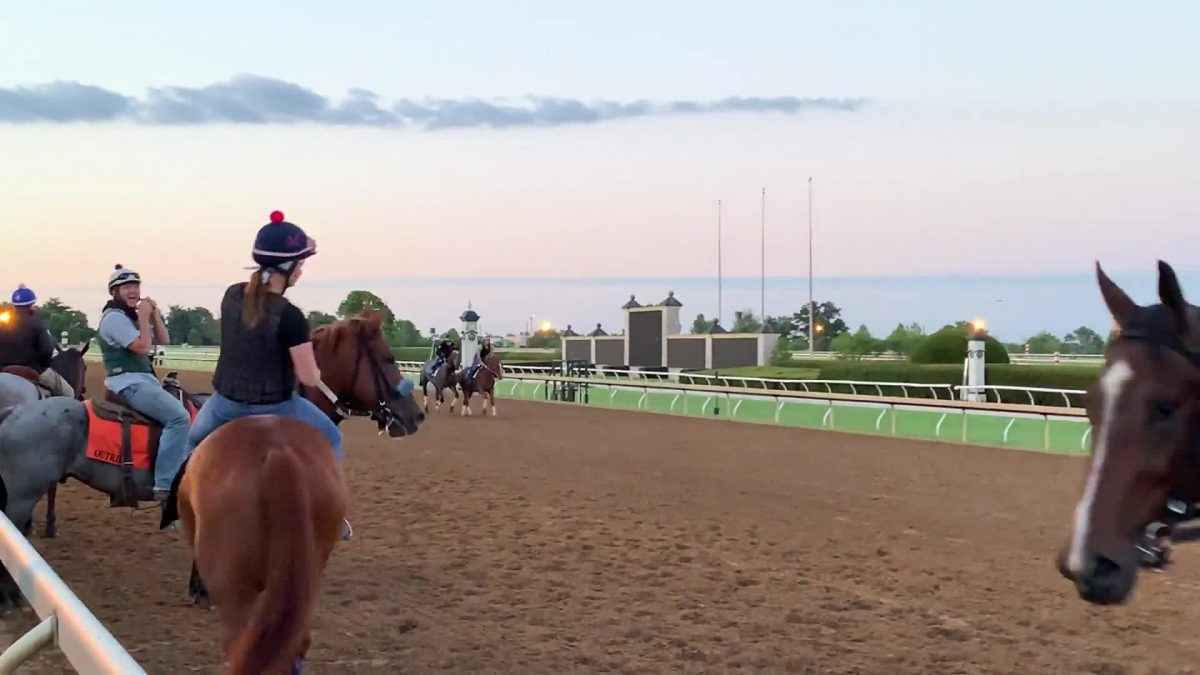 Here is Solar Strike galloping on the inside this morning at Keeneland. The Asmussen barn gave him an easy two minute lick, 3/8th’s work on Friday morning. This was not a registered as an official work. The term “two minute lick” comes from a horse traveling at a 15 second per furlong pace covering the one mile distance in 2 minutes. This pace is in between a gallop and a work. He continues to do well and will likely get to do a little more next week. 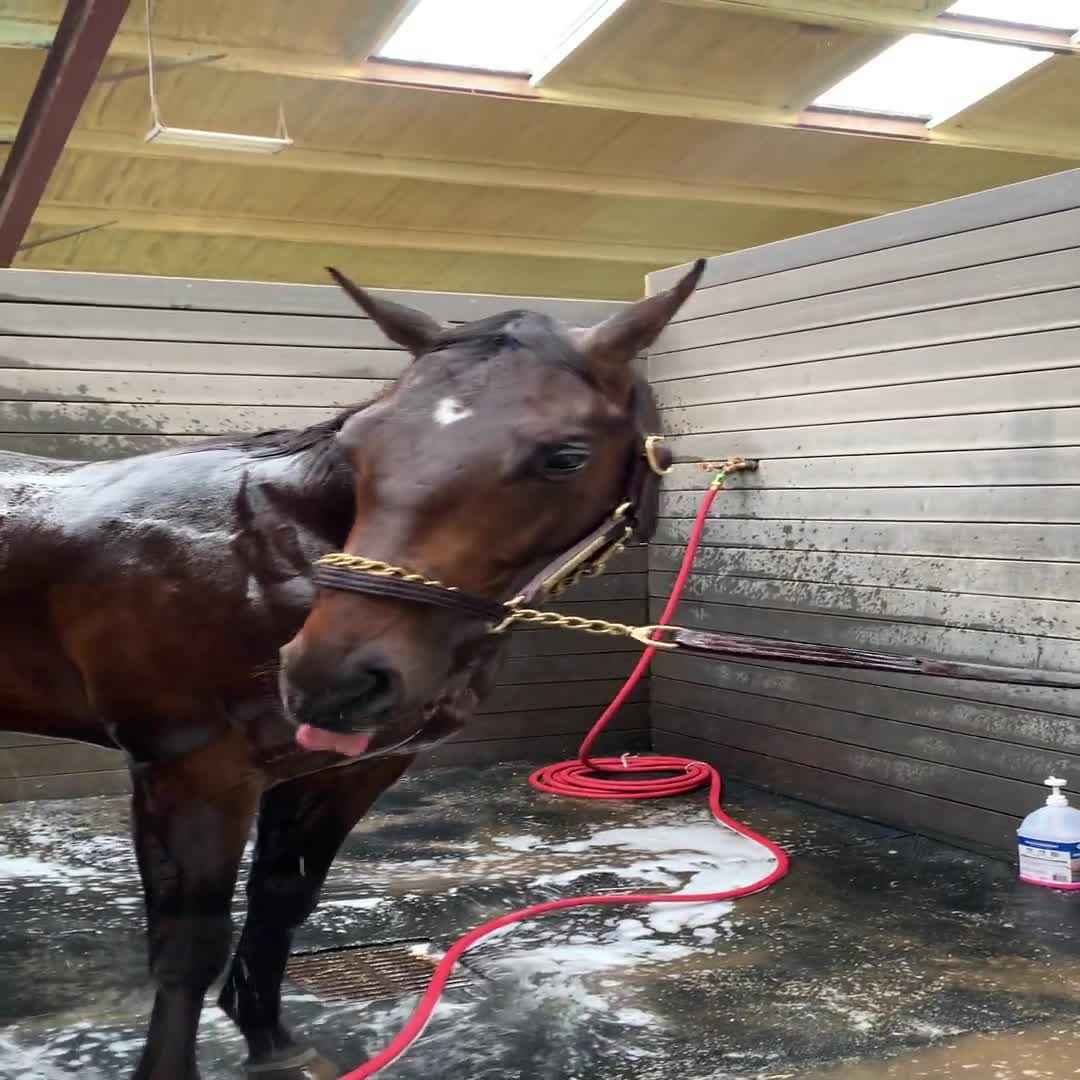 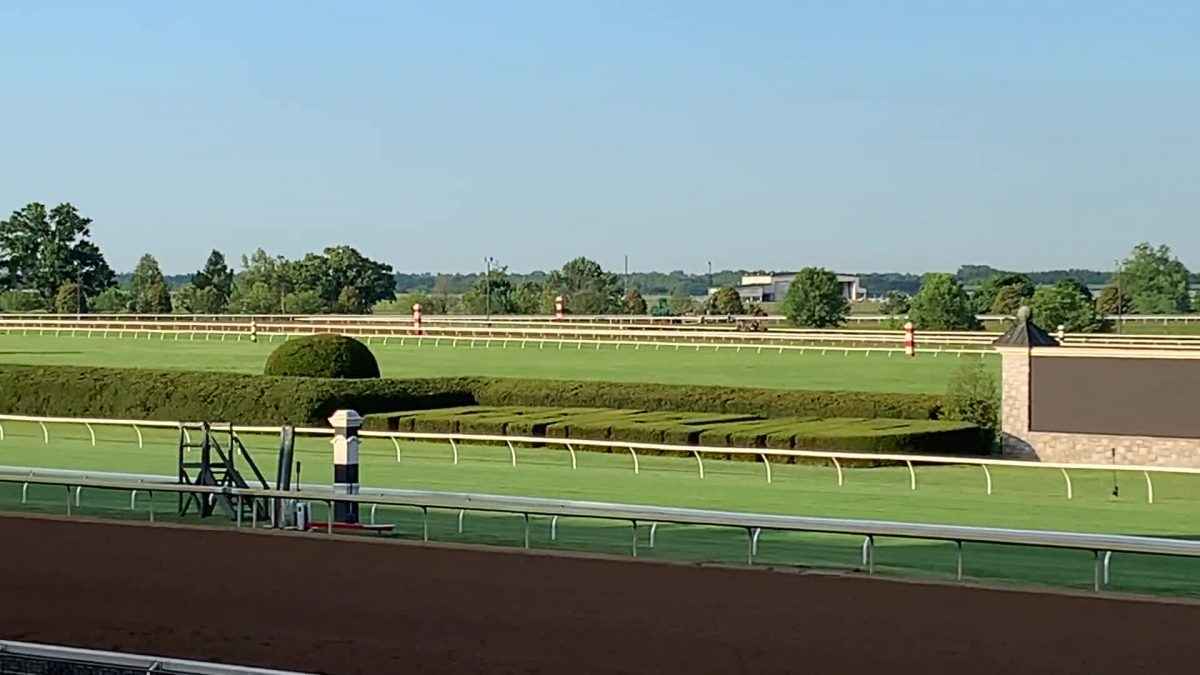 Joyful Addiction had her first breeze over the Keeneland main track, working 3 furlongs in 36.6 seconds. She worked in company on the outside of her barnmate, Emro. The Brad Cox team was very pleased with her first work since joining their barn. She will gradually get to do more each work.

Lazy Daisy has been entered in Friday’s 7th race at Churchill Downs. An allowance optional claiming going one mile and one sixteenth on the main track, for fillies three years old which have never won three races or claiming price of $100,000. As Lazy Daisy only has two lifetime wins, she is eligible for this race without being claimed. Lazy Daisy drew post 8 in an 8 horse field, with jockey David Cohen returning in the irons. Purse of $83,000.

This looks to be a very competitive allowance race, as half of the field exits out of the Grade 3 Fantasy Stakes. Trainer Doug O’Neill and his team said Lazy Daisy has been training great out of the Fantasy and is ready to roll. We will be in communication with Churchill Downs regarding their policies for attendance and will update accordingly regarding Lazy Daisy’s upcoming race. 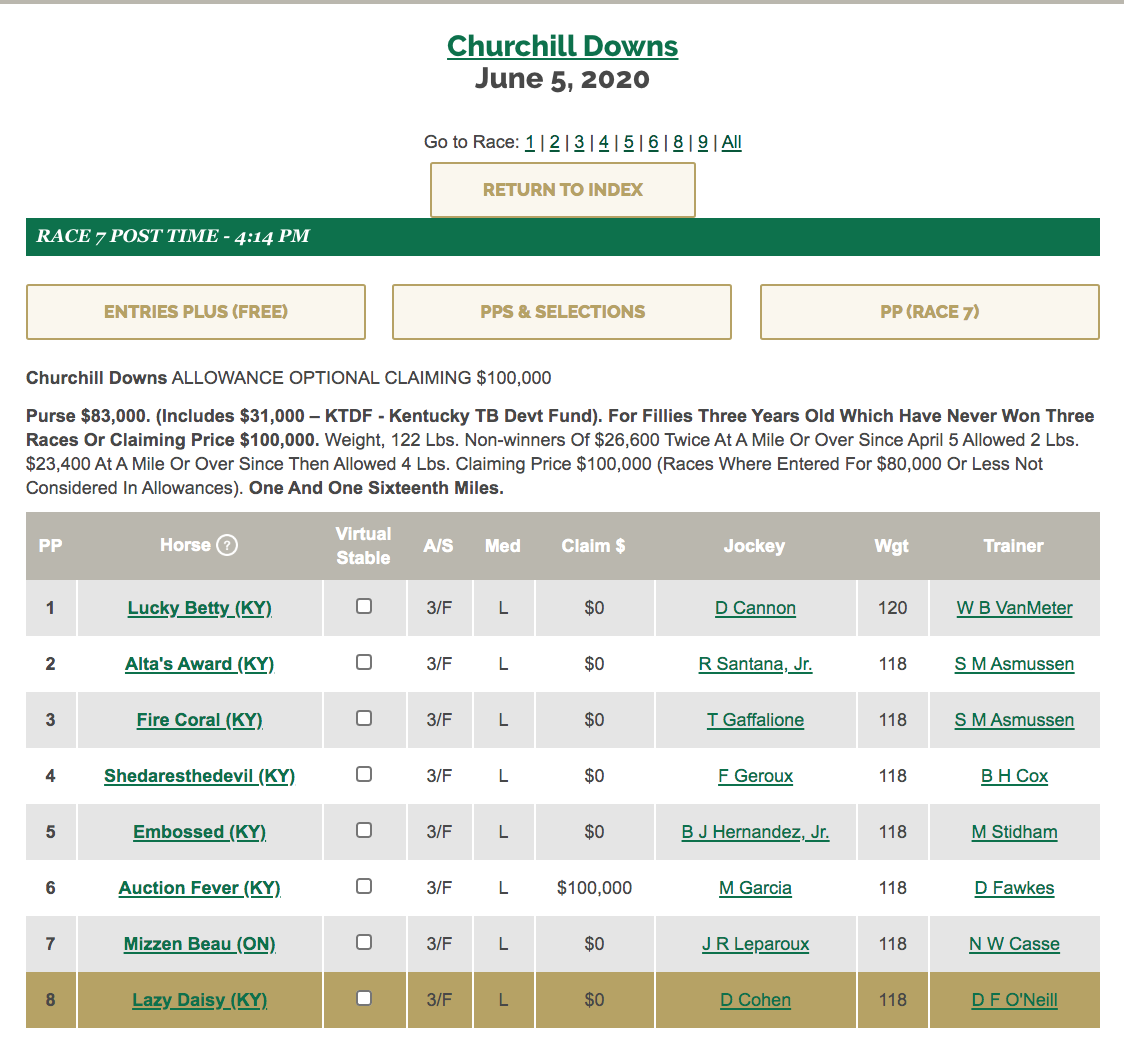 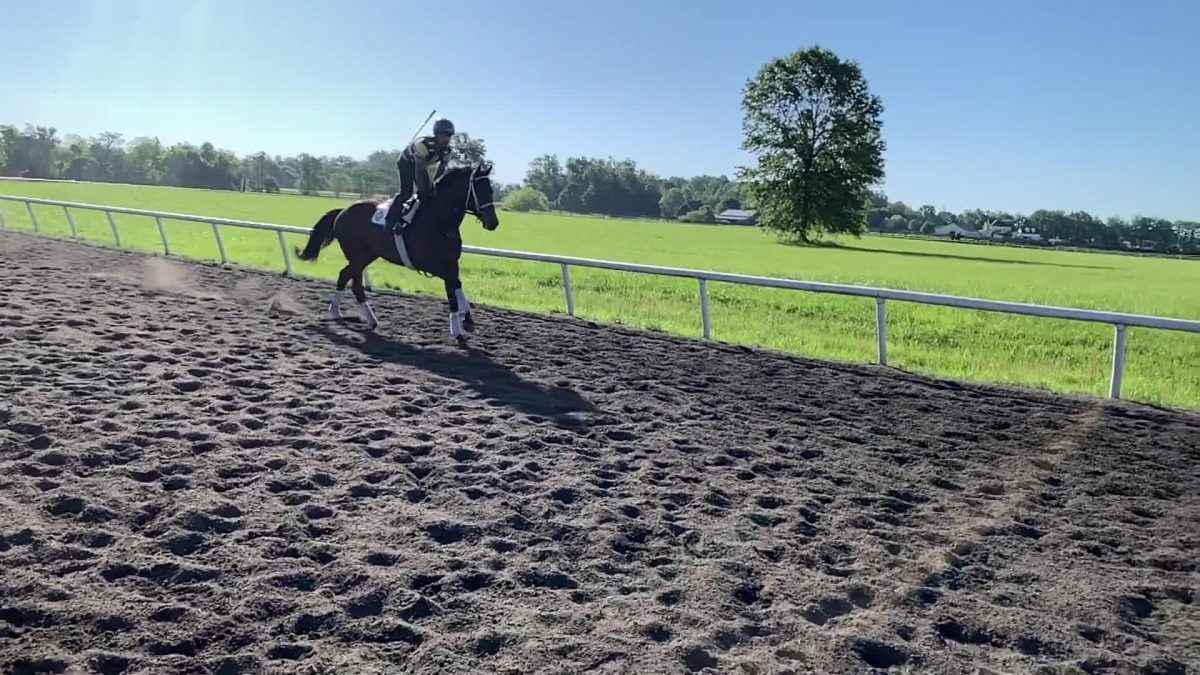 Wayne O had his first work back yesterday morning, covering 3 furlongs in 37 and change, galloping out 4 furlongs in 50 seconds. Take a listen to what trainer Tom Drury had to say after the work and plan for the coming weeks.

Moonlight d’Oro worked 3 furlongs in 37 seconds flat this morning at Santa Anita. She worked from a hand opened gate, meaning the gate was manually opened by the gate crew. This is commonly seen with 2 year olds as they begin to get more comfortable with the gate.   Team Mandella reports she continues to progress well.

A very encouraging performance from Utalknboutpractice, after completely missing the break in today’s 5th race. The starting gate can always be a question mark for a first time starter. With the scratch of the #1, Practice ended up having to break from the rail on top of that which is not an easy task.  After giving the field 5+ lengths at the start, Utalknboutpractice responded immediately to keep in contact with the rest of the field. He had to weave his way off the rail to find a clear path into the stretch, finishing well to just be caught for 3rd.

Utalknboutpractice will gain a ton amount of experience from this race and we would expect him to take a step forward next time out, with a clean break alone. Most importantly, he showed us he has ability today. 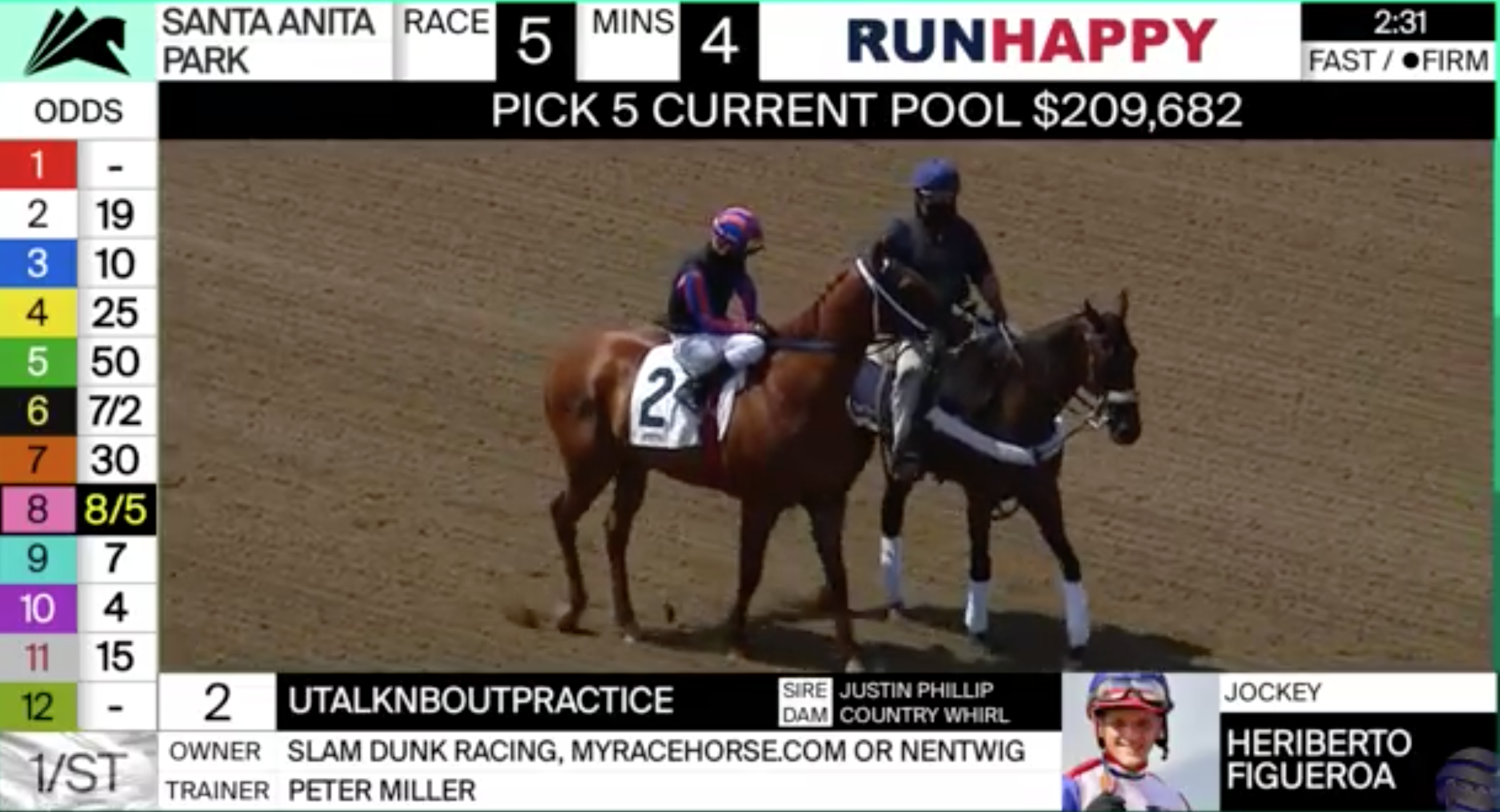 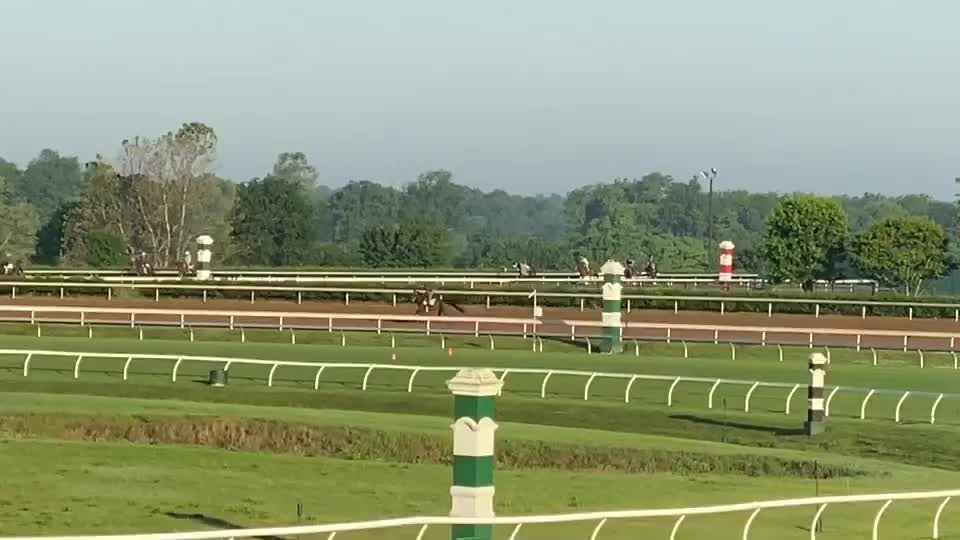 Lazy Daisy worked a half mile in 48.4 seconds this morning over the Keeneland main track. Jockey David Cohen, who is scheduled to ride Lazy Daisy next Friday, was aboard for the work this morning. Team O’Neill reported, “A real good move this morning, she’s a happy horse. Lazy Daisy went 48.4 galloping out in 1:01.6 (5 furlongs), 1:15.2 (6 furlongs)”. Pending she exits out the work in good order, entries are taken tomorrow for June 5th.