Per our previous post Takeo Squared underwent successful surgery on Tuesday to his right front condylar (previously reported as an injury to the left). Dr. Ryan Carpenter performed the procedure. Arthroscopic evaluation confirmed a complete displaced lateral condylar fracture. A number of screws were inserted to compress and stabilize the fracture. Arthroscopic evaluation of the fetlock joint also revealed damage to cartilage on the lateral sesamoid bone. Dr. Carpenter noted that Takeo recovered excellent from the surgery, placed bandages on the limb and that the horse walked soundly back to the barn. Dr. Carpenter’s prognosis for a return to racing based on the extent of injury is Fair. Dr. Carpenter recommended a lay-up period of 4-6 months with x-rays at the three month mark to assess how the fracture is healing. Stall rest is recommended for the first four months with hand walking beginning two weeks after surgery beginning at 5 minutes increments increasing 5 minutes every week up to 30 minutes. He’ll likely recover at Sunshine Farm or Ballena Vista Farm.

Ultimately we are in a wait and see pattern with Takeo in terms of whether or not he can resume a racing career later this year. After the recommended R&R we’ll get together with majority owner EC Racing to discuss his future status. We’ll provide updates as he progresses. If you have any questions feel free to contact us at support@myracehorse.com 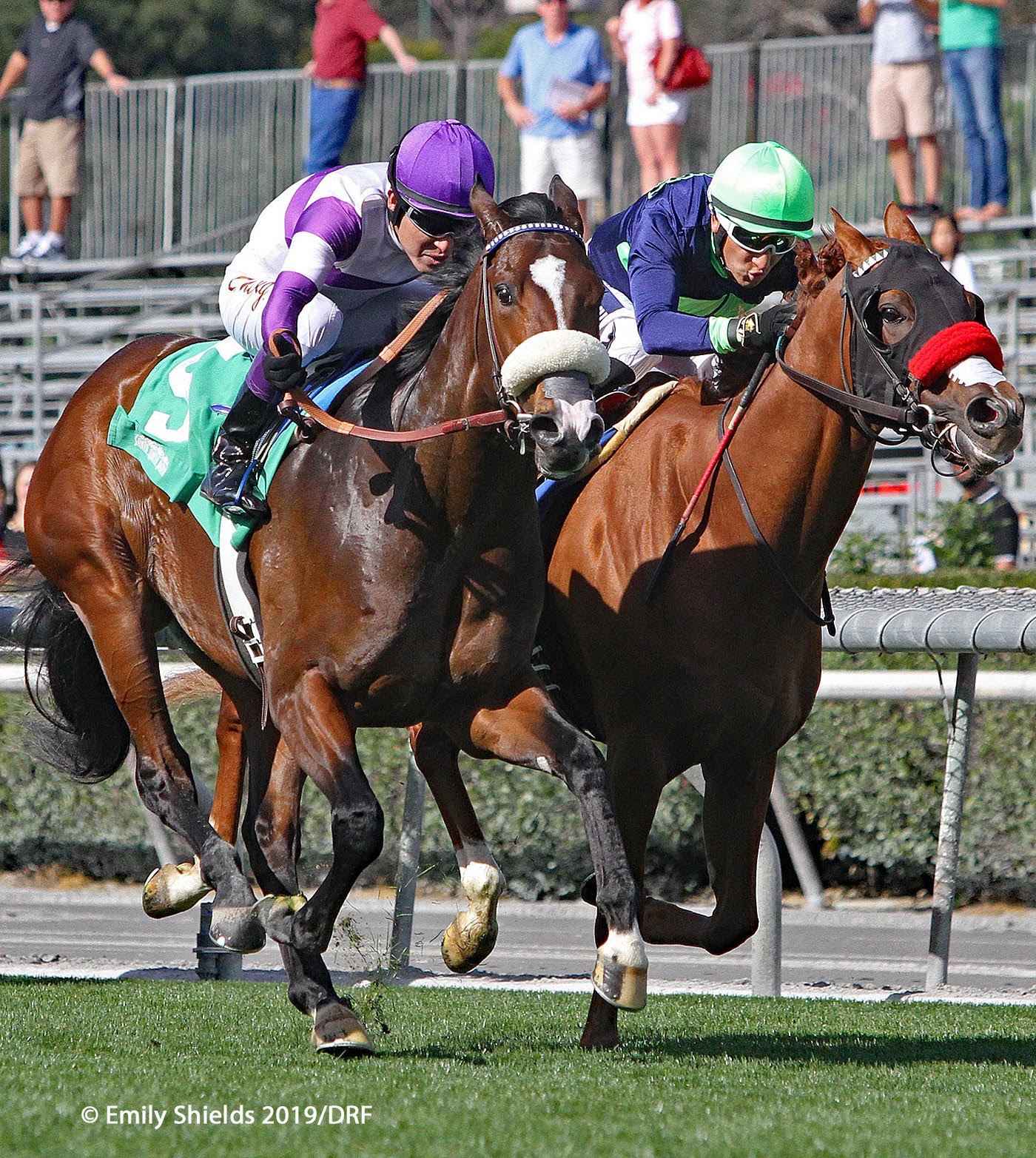 Swiss Minister has been entered in Sunday’s 7th race at Santa Anita, post time 2pm. Geovanni Franco is in the saddle breaking from post 7. We’ll monitor the weather and track conditions before making a final decision on whether to start. Ideally we’d like to see the rain tamper off and have the track dry out a bit by Sunday. We’ll keep everyone posted as we get closer. 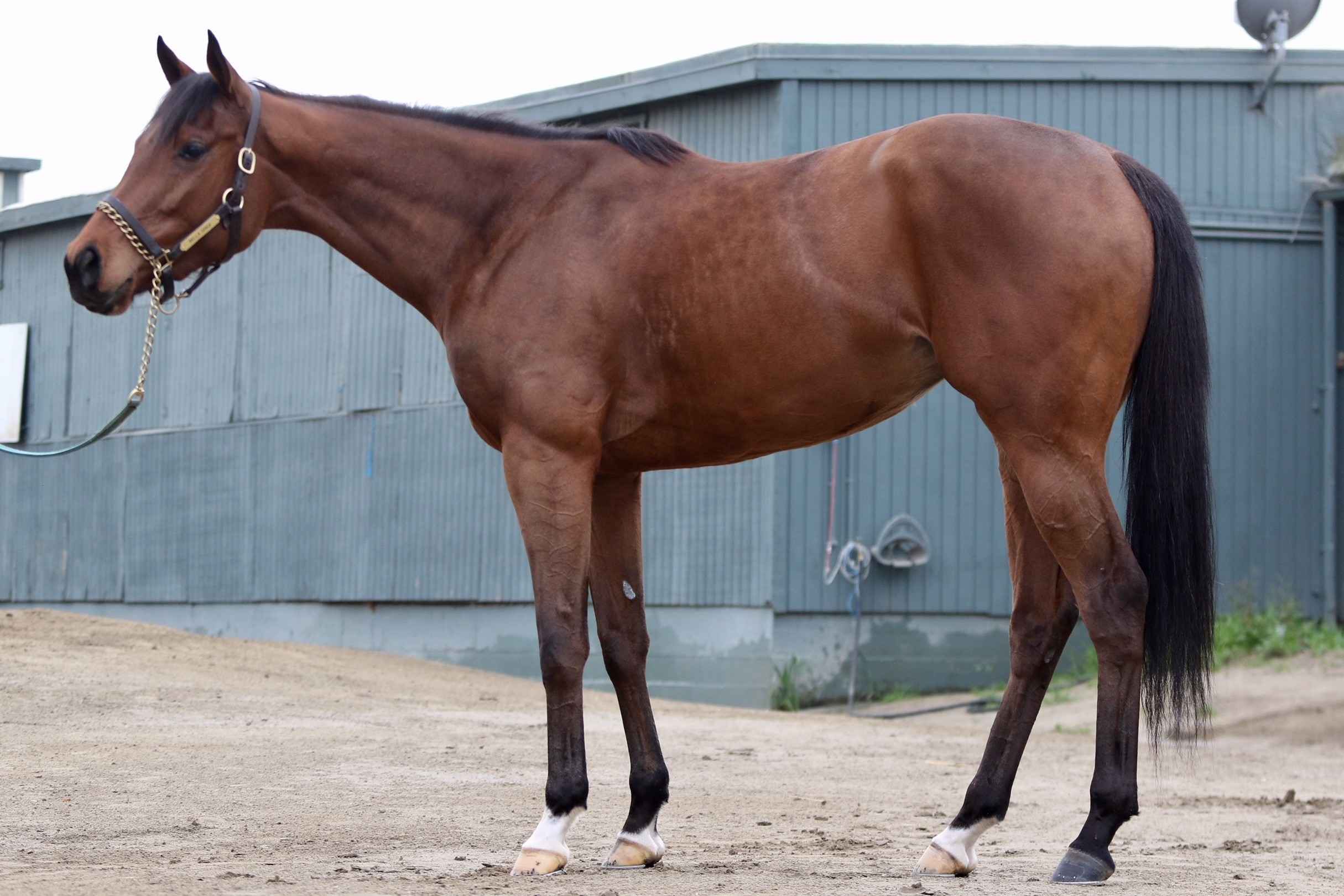 
Bella Chica, a three-year old filly by City Zip has the pedigree to be fast, precocious, and classy. In fact she flashed her speed on debut January 11, 2019 down the hill at Santa Anita where she pressed the pace the whole way finishing a very close second (Watch Race Replay). She most recently breezed four furlongs on 1/25/19 in preparation for her next race in mid-February. Check out her work on XBTV.


This filly is out of the stakes winning mare Bella Viaggia, an earner of $261k and winner of the California Cup Distaff at Santa Anita (also trained by Mike Puype). Bella Viaggia was highly competitive on the Southern California circuit and excelled racing between six furlongs and a mile on the grass. Bella Viaggia is by leading California stallion Good Journey (now retired) who also shuttled Australia due to high demand. At one point Good Journey had a phenomenal 67 percent winner’s to runner’s rate. Good Journey is also a half brother to former sprint champion Aldebaran. Speaking of half-brother’s did you know that Bella Chica’s sire City Zip was a half brother to 2004 Horse of the Year and top end stallion Ghostzapper (dam sire of 2018 Triple Crown winner Justify). City Zip who last stood at Lane’s End Farm in Kentucky for a $50,000 stud fee before passing away in 2017 was mostly regarded as a speed stallion. However, as his stallion career progressed he also showed the ability to sire a lethal trio of speed, stamina, and versatility (dirt and turf). Some of the champions sired by City Zip include Breeder’s Cup winners Catch a Glimpse, Dayatthespa, Finest City, and Work All Week, and 2017 Breeder’s Cup Classic runner up Collected. City Zip will also be represented on the 2019 Kentucky Derby trail with Improbable, trained by Bob Baffert who is being dubbed as “Little Justify” and was dominant winning the Los Alamitos Futurity.


Speaking of Breeder’s Cup, trainer Mike Puype is no stranger to finding the winner’s circle there as he trained back to back Breeders Cup Turf Sprint Champion Mizdirection in 2012 and 2013. Puype began training in 1986 and his horses have won 705 times while earning over $30 million in purses. Mike’s motto is “To be a winner, you have to surround yourself with winners.”


Put it all together and this filly has the pedigree and connections to have a lot of fun at the races.

Zestful came out of his last race really well so we are going to monitor the rain in the upcoming days and see how the field takes shape with the race likely coming off the turf on Friday.

Check out the recent interview with Phil D’Amato regarding our newest filly, Kiana’s Love.

We sent an email out from Robb Levinsky, President of Kenwood Racing, about Bullion earlier this week. In case you missed it Bullion has been dealing with some minor filling in his ankles and came down with a quarter crack (a hairline crack in the hoof wall). Both nothing serious in terms of missing time but unfortunately missed training time equals missed race (had been targeting the February 2nd Maiden Special Weight). Jerry Hollendorfer’s response when asked “can you give me an idea on his status, if you think he’ll need time off and/or when he’ll run?” and his reply was “I can’t tell you that, it’s up to the horse. He’s not lame, not sore, still training. We’ve never had to inject him or anything like that. I have 100 horses, at any time 10 of them are lame, he isn’t one of them”.

We know this has been a long journey but we hope the wait is well worth it when it comes time in getting him to the starting gate. If you have any questions feel free to contact us at support@myracehorse.com

Considering the amount of positive feedback we received for having offered a Pedigeek profile on the Country Whirl ’17 colt we asked Ren Carothers to submit a Pedigeek review for Miss Puzzle ’17, our tapit filly in Australia.

If you are interested in Pedigree this is a must read

As Pete told us the other day, she is ready to get back in training. Her first work was recorded this morning, hoping from an update from Peter Miller soon.

Nileist continues to progress from his recent foot abcess. He’ll continue to train forwardly as the foot improves. There’s an old saying in horse racing “No foot, no horse”. As a result foot injuries can be even more delicate to deal with than others. Patience can really be tested in this sport, can’t it? Additionally, the weather forecast is calling for heavy rains for the next 4-5 days thereby putting the work schedules into question. Generally speaking sometimes a horse could be ready to go but you don’t want to put them out on a sloppy racetrack. As a result, the workout schedule is thrown off kilter and any potential races you point to are that much more difficult to make. Furthermore once a race you’ve been pointing to is missed it is not as easy is “well can’t you run him right now?!” Each horse has their set of conditions they are eligible for and once the race(s) office uses that race it can be 3-4 weeks or more before that same race comes back again to enter your horse in. We know everyone has been looking forward to his first start for some time (us too) and there have been a few pot holes in the road. The reality is as many of you are aware of by now, is that’s horse racing. No barn is absent these sort of problems. It can be very frustrating at times but ultimately as Hall of Fame trainer Jerry Hollendorfer tells us “the horse tells you when they are ready and that’s when I run them.”

A bit of news to pass on regarding Takeo Squared. He’s recovering nicely after a successful surgery today performed by Dr. Carpenter. More details to come on specifics of the surgery, prognosis on resuming racing, and what his recovery process looks like.